Following our ten-day road trip around Wisconsin, we met up with the other American Queen Steamboat passengers for a night at the Radisson Blu hotel at Mall of America, near Minneapolis.  After getting registered and settled in, I took advantage of the hotel’s pool for a swim workout (such as it is in a small hotel pool), as Bruce relaxed poolside.  Not being shoppers, we opted to spend the evening at the mall getting a good walk in and a casual dinner at an Asian noodle restaurant, before returning to our room.

The next morning, we got to know some of our fellow passengers during the buffet breakfast.  They were from California, as were approximately ten percent of the sold-out ship’s 400 passengers.  Another ten percent were from either Australia or New Zealand where the seasons are reversed, and they were escaping their cold winter.  Since this was the only longer vacation (23 days) offered by the cruise line during the year, it attracted travelers from afar who wouldn’t be inclined to fly such a long distance for a 7-day cruise.  This made for an interesting mix of passengers, several of whom we had fun getting to know during our weeks aboard the paddle wheel boat.

Boat?  It’s not a ship?  No.  Ships sail the oceans, and boats, like the American Queen Steamboat, sail the rivers—just one of the things we learned from Bobby, the “Riverlorian” who presented lecturers throughout the journey.

Our home away from home for the following 21 nights, was a paddle wheel steamboat built in 1995, recently renovated, and beautifully maintained.  Step aboard, and you feel like you have been transported in time back to the 1890’s.  Other than the Front Porch Café and the outside decks, the ship has been decorated to bring you back to that era when steamboats were a common site on the rivers. 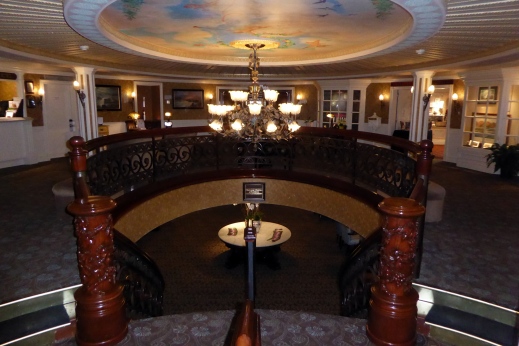 We were transported from our hotel to the American Queen by a bus wrapped to look like the American Queen on wheels.  The company has a fleet of these matching buses that mostly serve as hop-on/hop-off buses at each port.  In the early evening, the buses caravan to the next port where the drivers stay the night at a hotel.  One evening, while enjoying the view from the top deck, we saw all five buses in a line crossing the bridge over the river—cool!

In the morning, the buses are lined up dockside, ready to transport the boat’s passengers around town, arriving at each stop every 15 minutes or so.  Local docents hop aboard each bus during the busy morning hours to provide running commentary, and then disembark at Noon.  As the afternoon winds down, the buses make their rounds at each stop every 30 minutes while each driver takes their break for lunch at the Front Porch Café or their local favorite haunt.

The Front Porch Cafe offered buffets at each meal for a casual alternative to the dining room, as well as 24 hr. access to non-alcoholic drinks, soft serve ice cream (with toppings), fresh-baked cookies, and popcorn.

The drivers were terrific, especially Al, my favorite back in 2013 when my mom and I rode his bus frequently.  It was great to see he was still with the company!

Our cruise began in Red Wing, Minnesota where we were dropped off to embark the American Queen.  We stayed there overnight, so we had plenty of time to settle in our cabin, tour the boat, and still enjoy the town the following day.  (More about that in my next post.)

I was so pleased to see that Bruce was just as impressed with the boat as I had been when I boarded the American Queen the first time.  Although I had emphasized the small cabin size ahead of time, he even commented on how much space we had for storage!  (We had space left over after unpacking our suitcase filled with clothes for our 5-week trip AND our business supplies for our Etsy business at www.CookedGlassCreations.Etsy.com !).

We had the cabin next door to this one; however, we had already started unpacking before I remembered to get a picture!  (The storage and door were located along the wall behind me.)

Our stateroom attendant, Cassie, was such a sweetheart!

The food, entertainment, and friendliness of the staff was just as impressive to Bruce, and I was happy it was just as good as I had remembered it to be from my first cruise on the American Queen. 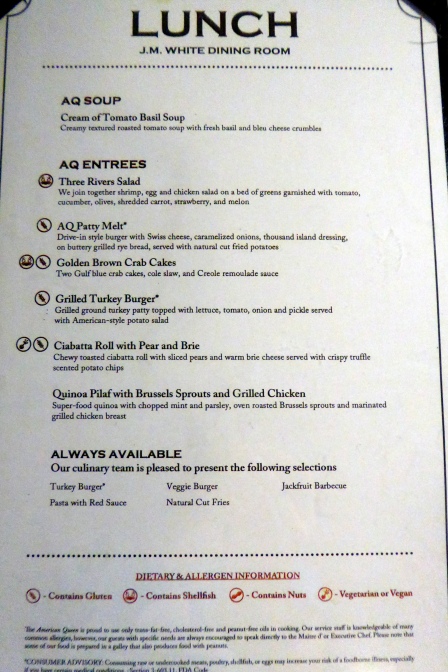 Here are the crab cakes I ordered from the menu above.  YUM! 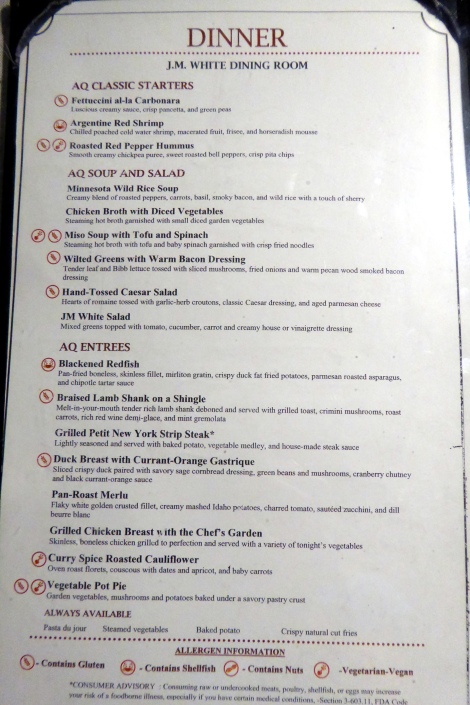 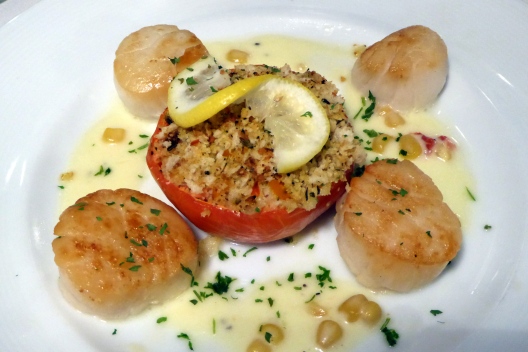 These scallops were AMAZING!

So was this lobster!

During lunch in the dining room, we had a choice of ordering off the menu or enjoying the lunch buffet.

Stories about our experience on board (and more photos!) will be included in future posts, so for now, I will leave you with some photos taken aboard the American Queen. 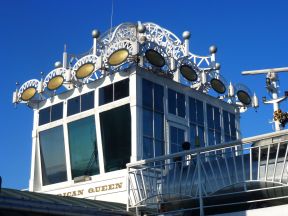 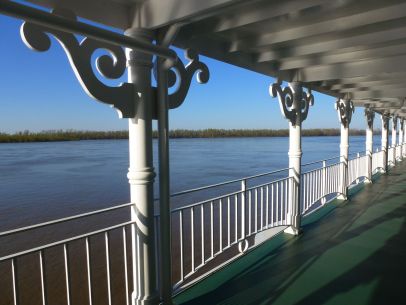 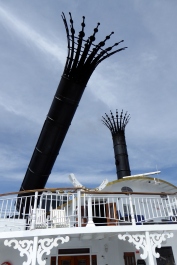 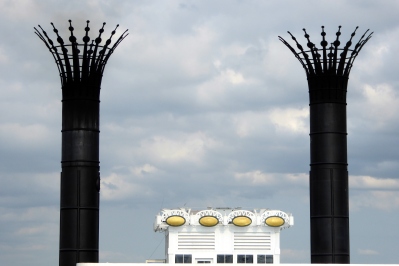 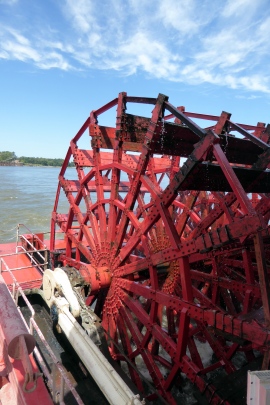 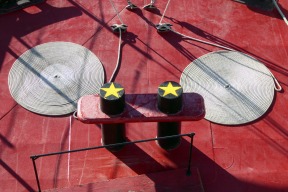 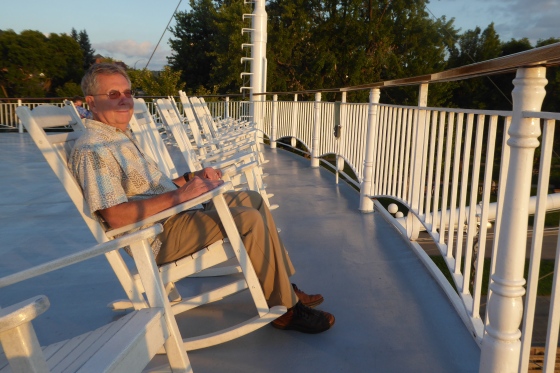 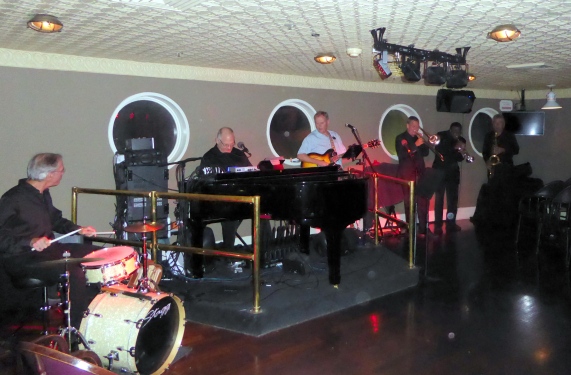 The Engine Room Bar was situated directly above the engine room (pictured below).  See those round windows?  We would watch the paddle wheel turning while listening to the music.  On each end of the night club, there were doors leading out to outdoor seating with a view of the paddle wheel.  More stories to follow about the band– and Bruce! 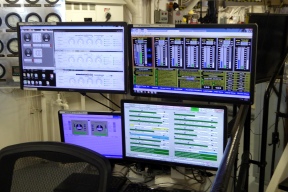 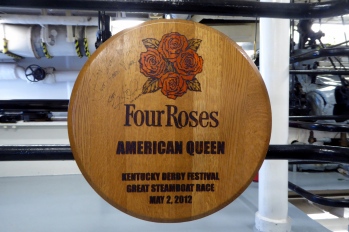 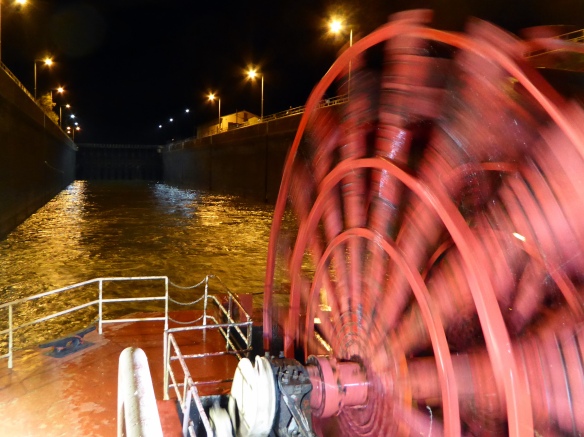 Next up:  A RELAXING DAY IN RED WING