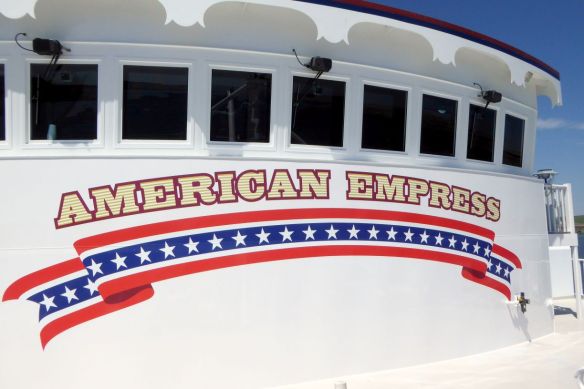 Having been on the grand dame of the fleet, American Queen, and the newest addition, the upscale boutique hotel inspired American Duchess, we were curious to spend a week aboard the four-year-old American Empress and get a feel for their Washington-based riverboat.

What makes this boat different from the others is that all of the staterooms are outside with balconies/ verandas.  Although our stateroom was located on the walking deck, and the veranda wasn’t as private as the balconies on the other decks, I loved having easy accessibility to get quickly around the boat when I wanted to check out the view from all angles for photography.  It was also convenient for my deck walks (8-1/2 laps equaled a mile), since there wasn’t a gym available.

As always when we cruise, we selected the least-expensive cabin, since we don’t need the extra space or spend much time inside our room.  At 150 square feet, it was the same size as most inside cruise ship cabins, and it was appointed with a mini refrigerator, coffemaker, flat-screen TV, desk, safe, and plenty of closet space.  A nice touch was the addition of a nice pair of binoculars. 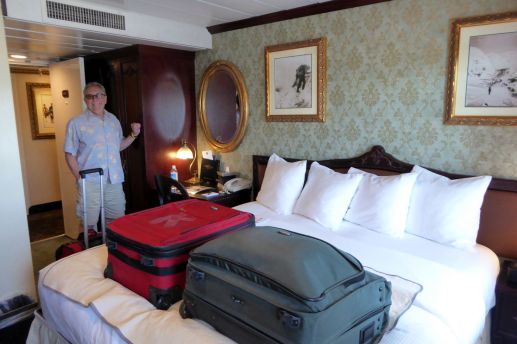 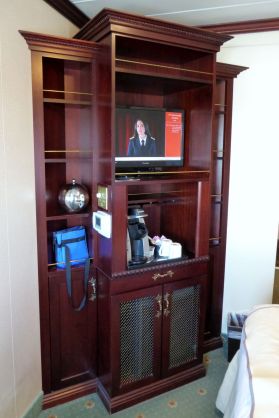 Just a short walk down the hall from us was the River Grill, the casual dining option for breakfast and lunch buffets, or reservation-only dinners.  Although we didn’t dine there for dinner, we enjoyed all of our breakfasts and lunches either on the deck outside of the River Grill, or just inside with great views looking out.  When the weather was nice, they would open the doors, so you could enjoy the comfortable temperatures inside, but still feel like you were dining alfresco. 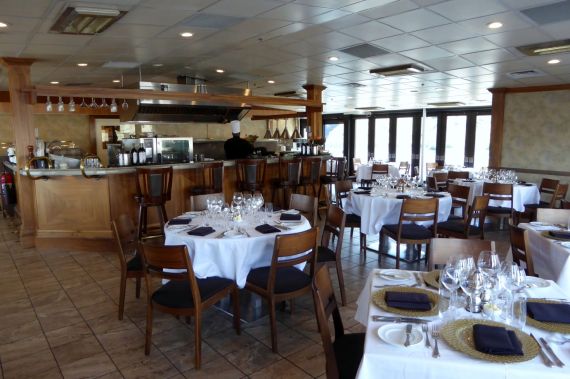 What made the convenient location dangerous for our waistlines was the 24-hour soft serve ice cream machine (with several toppings) and cookies.  (Thankfully, I did so much walking during the week that I didn’t gain any weight!)

The other dining option, the Astoria Dining Room was fabulous for dinner.  Although we had second seating (7:45 PM), it wasn’t assigned seating, so you could choose to dine alone or share a table with other passengers.  The dining room was never full for the later seating, because first seating was more in demand.  The River Grill was also a popular option, so it took the pressure off the dining room.  As a result, dining was relaxed, the service was excellent, the food was delicious, and we weren’t rushed out of the dining room at the end of the evening.  Baja, the Maitre D’ also made sure the wine was always flowing. 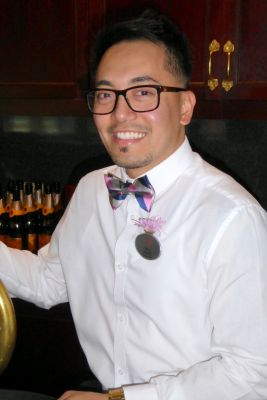 The highlight of our dining experience was being invited to have dinner with Captain Andrea Mickelson.  As it turned out, my previous three cruises (two with Bruce and one I took my mother on) totaled more cruising days with the company than any other passenger, so that is why we were invited!

We were quite impressed with the captain’s eight-year rise in the ranks from housekeeper to earning her USCG Captains license in 2002.  She has been on the rivers ever since, and her passion is evident.  Thanks to Baja seating me next to Captain Andrea, I was able to ask her a lot of questions and get to know her a bit.

Baja, along with Adam (bartender/ cocktail waiter), Evan (waiter), and Gail (Excursions Manager), were all working aboard the American Duchess when we were on in January, so it was fun seeing them again and getting to know them better.  Adam remembered the dates we would be on, because it was his birthday during our cruise, and Baja scheduled us in his phone; so, we had a very warm welcome from them both on the first day!

Adam, Evan, and Baja with Bruce

In between the show and dinner, and then again after dinner each evening, we made our way to the Paddlewheel Lounge to hear Frank play piano and sing.  What a hoot!  His quirky sense of humor added even more enjoyment to his wonderful singing and phenomenal piano playing.  He had us thoroughly entertained!  And, when he wasn’t playing, we enjoyed the great views of the scenery out the side windows and the turning red paddlewheel out the back.  Off to the side, there was a small library with comfortable couches, and four computers to access the free WiFi.

In the show lounge, Lawrence gave informative lectures during the day (We particularly enjoyed his two-part talk on Lewis & Clark).  At night, there were excellent shows featuring various combinations of the four talented staff singers accompanied by a fabulous four-piece band.  Sammi and Daniel were so much fun and friendly, and they seemed to truly enjoy performing together.  Greg (Cruise Director), and his wife, Lindy (Hotel Manager) reminded us so much of husband and wife team, Max and Darcy, the cruise director and assistant cruise director/ entertainers aboard the American Duchess.  Not only did they all remember our names after the first time we met, but they were very personable, friendly, and amazingly talented.  “Lindy on a High Note” was Lindy’s fantastic cabaret, which highlighted her operatic training while singing selections from Broadway musicals.  Greg followed up with his own one-man show of Broadway musicals, complete with on-stage costume/character changes for each one.  From Fiddler on the Roof to Don Quixote to Phantom of the Opera, we were totally captivated by his versatility and talent!

Sammi and Daniel got Bruce up to join them as a “Pip” for a Glady’s Knight & The Pips tune! 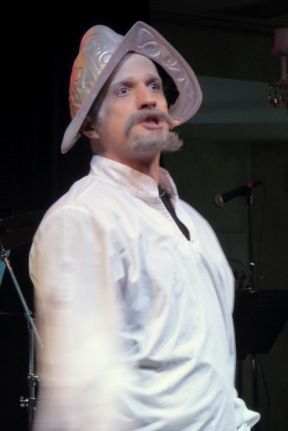 The dining and entertainment on all three boats is truly top-notch quality, and the best we have experienced on the water, including the many ocean cruises we worked on as Arts & Crafts instructors with two major mid-level cruise lines.

What makes American Queen Steamboat Company’s cruises unique, though, is the included hop on-hop off buses that follow the boat throughout the itinerary.  They make frequent stops at several of each town’s highlight attractions, and admission to those attractions are included as well.  (Check out this blog post for more about the buses.)

Premium excursions are also available, and we scheduled our first one for this cruise.  (More on that in a later post.)

The most enjoyable aspect of each cruise we have taken with American Queen Steamboat Company, however, has been the staff, from the captain all the way down to our stateroom attendant.  As personable and friendly as they are, it appears as if they wisely hire for personality and train the skills needed to perform the job.  The company also does a great job promoting from within.  Lindy was originally hired as an entertainer when the American Empress first started; however, she was asked by the owner of the company, John Waggoner, to become Hotel Manager.  After initial protest by Lindy (I’m not a hotel manager; I’m an entertainer!), she agreed under the condition that she would still be able to perform her cabaret.  Mr. Waggoner agreed, and she now pulls double duty and seems very happy.

Sean had to sit out all day checking people in and off the boat, so he kept himself (and the passengers) entertained solving his collection of Rubik’s Cubes.  He was fast! 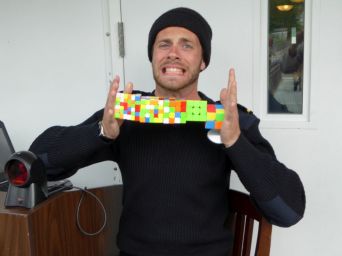 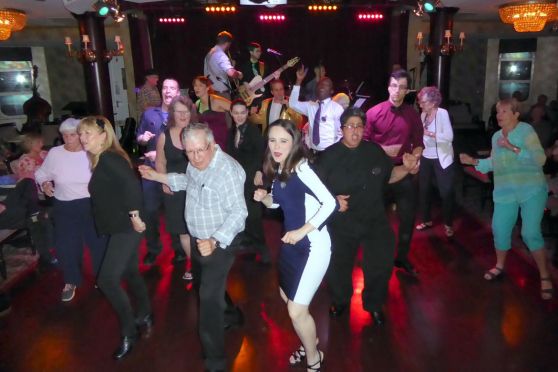 The best part of the dance party was the crew getting to join us!

Romano “Roro” was a hoot!  That’s him in the previous picture (white shirt) kickin’ up his heels at the dance party.  He wowed us with his splits and other fancy dance moves!

The staff also goes out of their way to make sure their guests are happy and having a good time.  I witnessed one man at the River Grill looking at the selection of ice cream toppings and asking where the nuts were.  Edward, the River Grill chef promised he would get some for him the next day.  Sure enough, the following morning, we watched Edward pour out a bag of mixed bar nuts on his workstation, so he could pick out the peanuts for this passenger’s ice cream.  Then, he spent his work break going into town to buy a can of peanuts to keep this passenger happy the remainder of the cruise!  That’s going above and beyond, don’t you think?

Knowing I liked the chocolate chip cookies, Evan surprised me one night at dinner with a wrapped plate of the treats to take back to our cabin.  I hadn’t asked for them, but he thought to do it anyway. 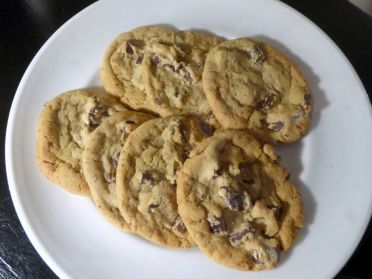 In addition to seating me next to the captain, Baja brought us out lobster tails on the last night of the cruise, because he knew how much we had enjoyed them the night before.

It is all of these reasons that we will continue cruising with American Queen Steamboat Company.  We already have one booked for next summer!

Next up:  LEWISTON (IDAHO) AND CLARKSTON (WASHINGTON):  CAN YOU GUESS WHO THEY ARE NAMED AFTER?