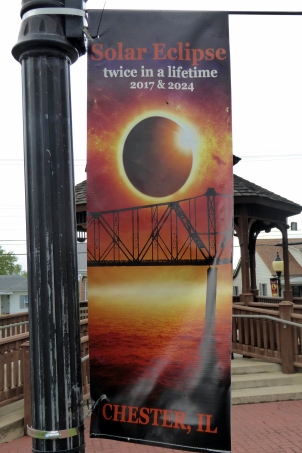 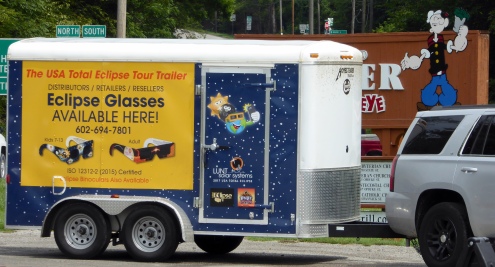 I sure hope they sold out of those eclipse glasses, because the next total solar eclipse to be viewed in the U.S.A. won’t be until April 8, 2024!

Our post-solar eclipse stop along the Mississippi River was Chester, Illinois.  Although Chester was a stopping point on several occasions for Mark Twain when he piloted a riverboat on the Mississippi River, from 1857 until the Civil War, it is best known as the “Home of Popeye.”  Popeye’s creator, Elzie Crisler Segar, was born in Chester, and several of his characters were created from experiences with the people from the town. 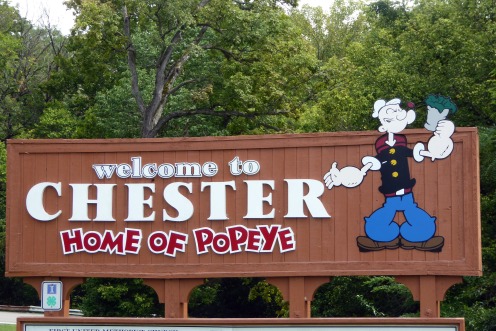 Have you ever wondered where Olive Oyl got her name?  Back in the 1800’s, Chester’s chief commodity was castor oil, which was used as a lubricant.  Guessing there was a connection there, I researched Olive Oyl on Wikipedia and discovered she was the youngest sibling of Castor Oyl.  Aha! I knew that Olive Oyl was named after olive oil; however, I’m pretty darn sure big bro was named after castor oil, after Chester’s chief commodity.  (As you have probably ascertained by now, I’m not exactly a Popeye scholar—or, familiar with all of his buddies!)

Coming up next:  CRUISING TO CAPE GIRARDEAU