Unlike solar eclipse enthusiasts, Bruce and I did not book our travels because of the solar eclipse.  People had been talking about the upcoming solar eclipse for months—even years!  There was even a non-swimming related thread on the U.S. Masters Swimming Discussion Forums (of which I am a member) about the eclipse and where the best place would be to see it.  There were swimmers I knew who traveled out of state just so they could see the eclipse.  Me and Bruce?  No.  I hadn’t paid much attention to the discussion, and we didn’t even know when the eclipse was going to be when we booked our three-week Mississippi River cruise aboard the American Queen.

It wasn’t until we were already on board that Bruce and I realized we would be in one of the best places in the country to view the eclipse in its totality.  There was even a special premium excursion, “American Astronomy:  A Solar Eclipse Tour,” passengers could book for August 21, 2017, the day we were docked in Alton, Illinois.  Us?  No, we gave it a miss in favor of taking the included tour into St. Louis, for the morning.  We figured we would catch the eclipse when we returned to the ship for the afternoon (Although, we never bothered purchasing viewing glasses, so we wouldn’t be able to view it).

As it turned out, the riverside casino, Argosy Alton, was sponsoring an eclipse viewing party at the park adjacent to where the ship was tied up.  I happened to notice a little note posted on the purser’s desk counter about it with a mention that free viewing glasses would be handed out to the first 300 people in attendance, beginning at 11:30 am.

Filing that tidbit of news away in my memory bank, off we went to “see” St. Louis.  (Seriously.  How much can you really see of a city on a morning bus tour?)  I’m not a fan of bus tours, because you can’t experience a place in such a short period of time.  That, my friends, goes without saying, though.  I could write an entire BOOK on the topic!  Suffice it to say that shooting pictures out the bus window is definitely not my cup of tea, nor is getting off the bus for a few minutes to shoot a few more pictures.  Having said that, we thought it was better to see something of St. Louis than nothing at all; so, the following pictures (shot out the bus window and otherwise) are what we saw of St. Louis: 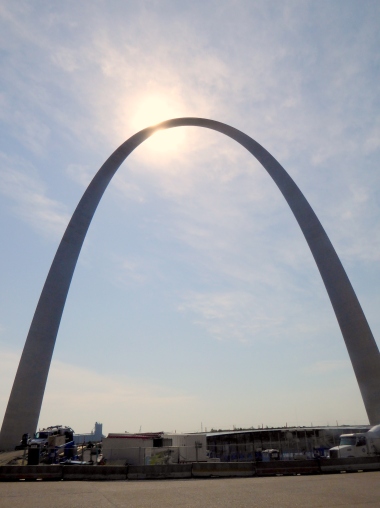 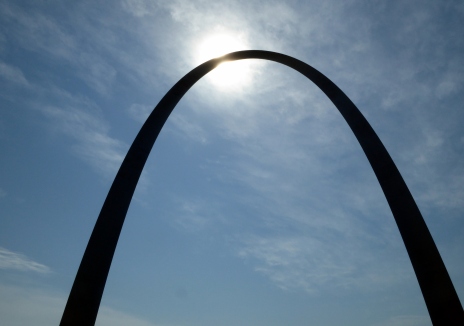 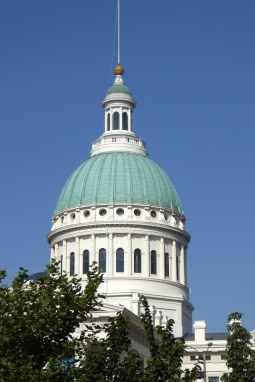 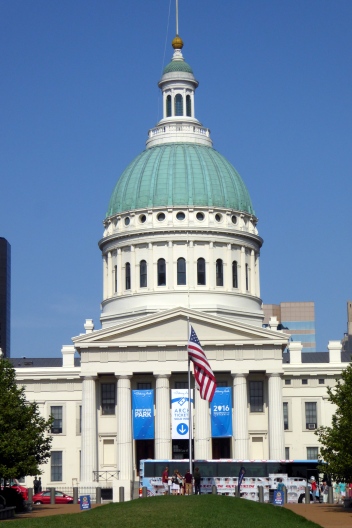 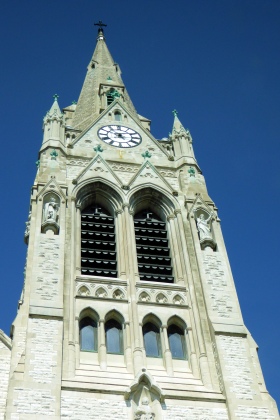 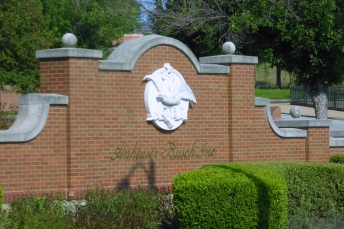 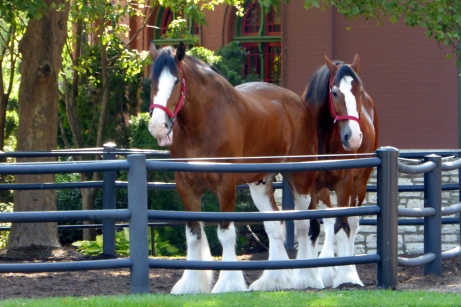 As the bus returned to Alton, I surveyed the meager crowd at the riverside park that began to gather for the solar eclipse viewing party.  Quick calculations made by gazing out the bus window led me to declare upon disembarkation, “Screw having lunch.  I’m going to find those free viewing glasses!”  Ignoring Bruce’s protests, off I went in search of those eclipse peepers while Bruce mumbled behind me.  It was hot out, and neither of us wanted to hang out in the park; however, I wasn’t going to let this opportunity pass me by.  The eclipse was going to happen, so we may as well be able to view it safely!

Glasses in hand, and a grateful “Thanks!” to the Argosy Alton employees who so graciously dispensed them, we returned to the ship, ate lunch, and waited out on deck.

As the eclipse began, I noticed clouds gathering on the horizon.  Then, the clouds got closer… and darker… and, then the race was on.  Would we witness a total eclipse of the sun by the moon, or would the eclipse get obliterated by a rain storm? 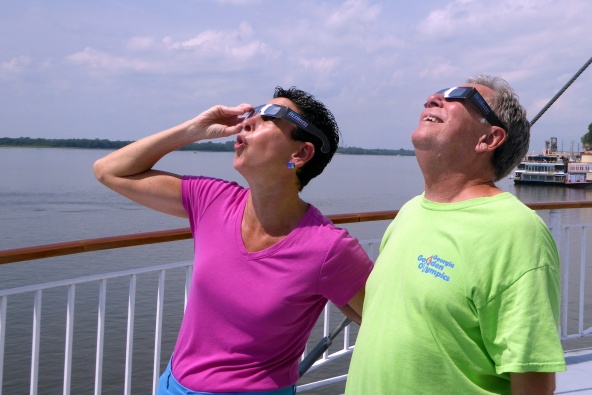 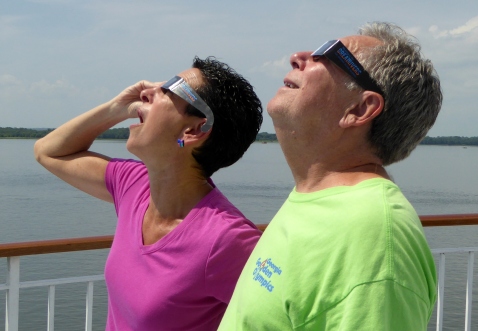 We watched and waited.  Then, I came up with an idea and shifted my focus away from the impending gloom.  How about photographing the eclipse by covering the small lens of my Panasonic Lumix with the eclipse viewing glasses?  I couldn’t safely look up at the sun without my glasses; however, I could guess at the angle, shoot, review the shot, and try again if I missed!  Wash, rinse, repeat!  Yeah, there were a lot of misses; however, I did manage to get a few shots, too.  That’s the nice thing about shooting digital (rather than film, like the “old days”); it doesn’t cost anything to make a bunch of mistakes, and try again! 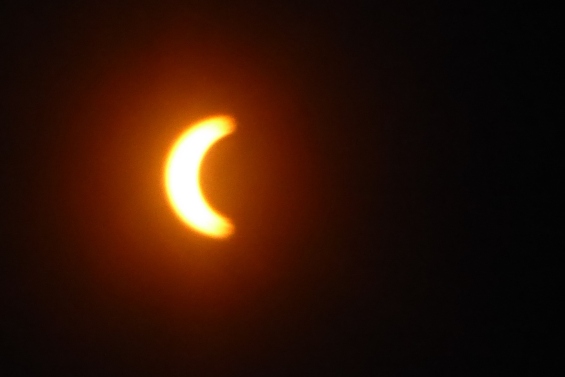 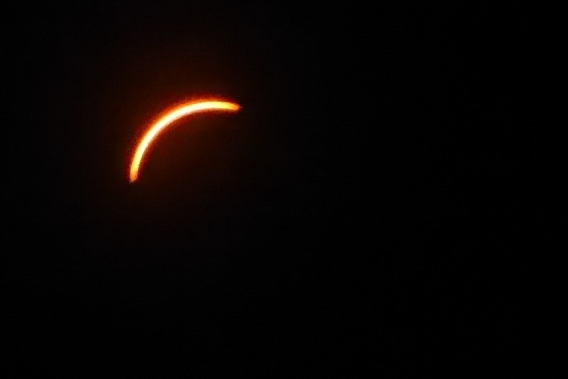 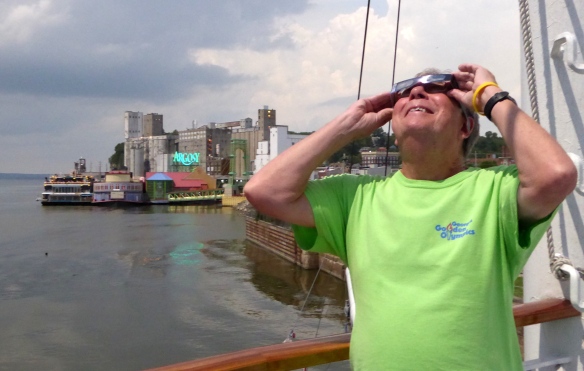 Bruce’s last look at the total eclipse as the Argosy neon lights turned on, and the storm grew near 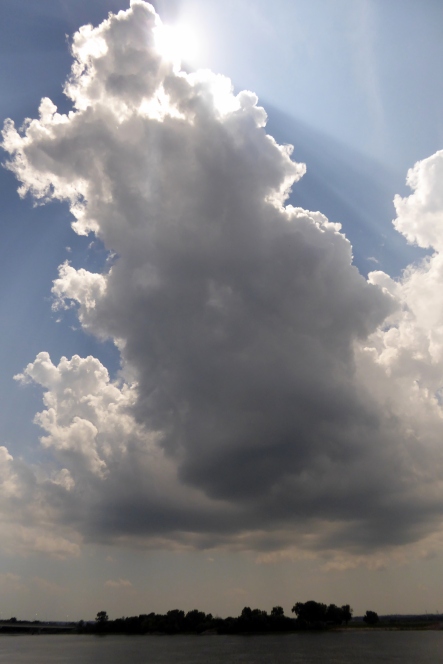 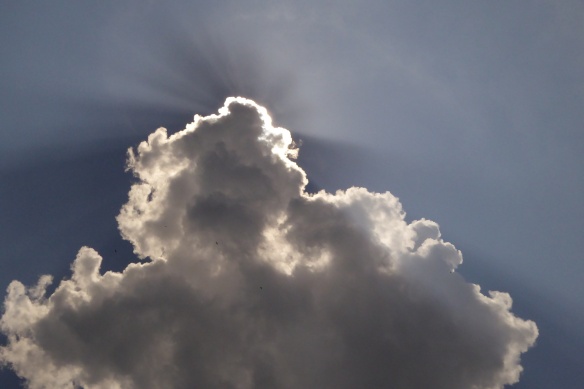 Pleased that I captured a few photos, I returned to viewing the eclipse—and watching the clouds roll in.  It was an eerie site, difficult to describe—and, even harder to capture accurately in a photograph.  When the eclipse reached totality—or 99.7% in Alton, according to local experts—the ambient light took on a strange hue.  Between the eclipse and the impending rain storm, it was the strangest feeling.  After the crowd at the park cheered enthusiastically at totality, the nearby Argosy Alton Casino neon lights turned on, the wind kicked up, and a huge cloud passed in front of the sun, obliterating it for less than a minute.  Soon after, it got very windy, the storm blew in, and it began to thunder, lightning, and rain.  We got to see totality just in in the nick of time.  Between the “ooh’s” and “ahhh’s” (and, me poking Bruce with a snarky, “Aren’t you glad NOW that we got these viewing glasses?”); in retrospect, Bruce and I realized we couldn’t have planned it better if we had tried.  August 21, 2017 was a day to remember for a very long time.