It had been years since I had read a book by Samuel Langhorne Clemens; however, memories of The Adventures of Tom Sawyer and The Adventures of Huckleberry Flinn came back to me during our visit to Hannibal, Missouri.

Hannibal was the boyhood home of Clemens (aka Mark Twain), and it inspired the setting for those two novels.  Many of Twain’s haunts have been restored to their historical accuracy, so the entire town has a Mark Twain feel to it.

Samuel Clemens (aka Mark Twain) visited with the passengers one evening aboard the American Queen.  He never broke character, even during the Q&A session after his monologue!

It’s a picturesque little town with houses dotting the bluffs that border the river, and attractive 1800’s-era businesses that quaint and well-maintained to attract the tourists.  The shops and restaurants are even named after Mark Twain characters. 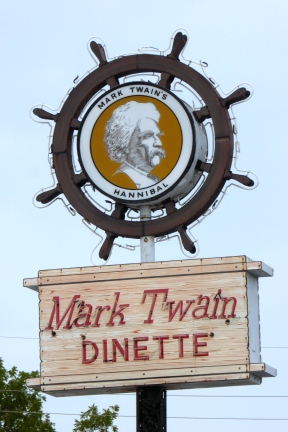 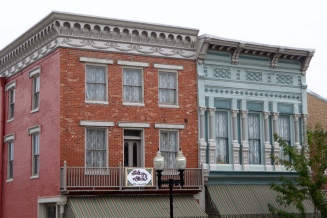 We enjoyed our tour of Mark Twain’s childhood home and the Mark Twain Museum—both well worth the visit, especially the Norman Rockwell exhibit at the museum.  They thought of everything, even making the famous fence a tourist destination, complete with paint brush and bucket!

Have you ever wondered how the name “Mark Twain” was chosen by Clemens?  If you remember back to Clemens’ novels, Mark Twain was fascinated by the Mississippi River and wanted to become a river pilot.  Back in the 1850’s, river pilots didn’t have modern navigational aids.  When entering shallow water, a man was sent to the front of the boat with a lead weight tied to a rope.  He tossed the rope out in front and let it sink to measure how deep the water was.  A series of knots were tied in the rope at measured distances.  A “mark” was the distance of six feet (the same as a fathom in the ocean), and “twain” meant two; so, the knot at “mark twain” meant the water was twelve feet deep.  For river boats, twelve feet was safe water and mark twain meant “safe water ahead”, so Clemens like the way that sounded!

The Unsinkable Molly Brown was another famous character from Hannibal.  Remember her?  She was the Titanic survivor who heroically helped rescue many women and children during the disaster.  She was a distant relative of Mark Twain’s, and Hanibal was her home as well.  (Her home was open for touring as well; however, we didn’t visit it.)

We found Hannibal to be quite a charming town and well worth hangin’ out in for a day along our Mississippi River voyage. 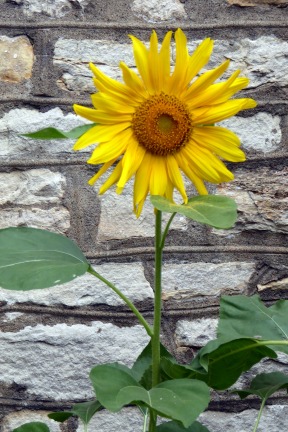 Meanwhile, back on the American Queen Steamboat, the evening entertainment aboard the paddle wheeler took an entertaining turn in a more personal way.  Check back for more details in my next post!

2 thoughts on “HANGIN’ IN HANNIBAL”