Before I post “FATHOM:  OUR FINAL CHAPTER”, I can’t locate the article I wrote about teaching community English in the Dominican Republic during our second cruise in March.  (Either I forgot to post it, or it disappeared from my blog!)

In between our two morning work sessions at Chocal, we spent an afternoon teaching “community English” in the small farming town of Cupey, Dominican Republic.  The bus ride to this community of 4,000 was an extremely bumpy one in some areas where we traversed unpaved rocky roads with large pot holes.  What a relief when we finally arrived into town and were able to drive over paved roads once again!

Along the way, there was some interesting scenery, to say the least.  Although I managed to get a quick picture out the window of this cattle drive, I missed one when a man was walking his two bulls alongside the roadside. 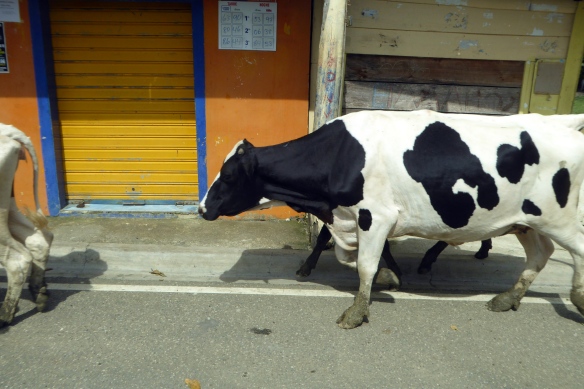 The best shot that got away, though, was the guy walking a pig.  Yes, you read that right—a PIG!  He even had a leash of rope around its neck.  This wasn’t just some small pot belly pig, mind you; this was a HUGE pink pig munching away happily at the grass along the roadside!

When we arrived at the community center, we were greeted by the families who would become our students for the afternoon.  After introducing themselves to us, one-on-one, we were divided into groups and assigned to a student for each teacher.  A few of the families had opened their homes as a meeting place for the days’ lesson, so we walked down the street to the house where we would be teaching.

The students had been taking classes and studying on their own, but working with Fathom passengers was a supplemental opportunity to converse with Americans and learn more.

The lesson they had worked on prior to our arrival was entitled “Nature”.  They had learned the English name for several animals, so we were instructed by the facilitators from Entrena to review the lesson before moving on to “Classroom”.

My student, Doris, was a bit shy and unsure of herself.  To break the ice, I thought it would be fun to make the sound of the animal I wanted her to say in English.  I also had pictures to point to that had the English word written under each animal; but, I thought making her laugh would ease her nervousness.  At least, I thought it would make her laugh.

Imagine my dismay when I started barking (a pretty good rendition of a dog, I thought), and she pointed to the horse and said, “Horse”.  Ohhh boy; this was going to be a long afternoon…

Knowing my bark was the best animal sound in my bag of tricks, I immediately switched tactics and pointed to each animal for Doris to say in English.

The “Classroom” lesson had items such as a pencil, ruler, desk, chair, chalkboard, teacher, student, etc.  One of the students in the picture was wearing a backpack, and that was one of the words Doris needed to learn.  No can do; she just couldn’t get that one down.  I had offered her plenty of positive feedback (“Good!” and high-fives) when she got even close on the other words, but she couldn’t get past “back” to even get to the “pack”.  How I wish the little girl in the picture had carried her books to school in her arms, instead… 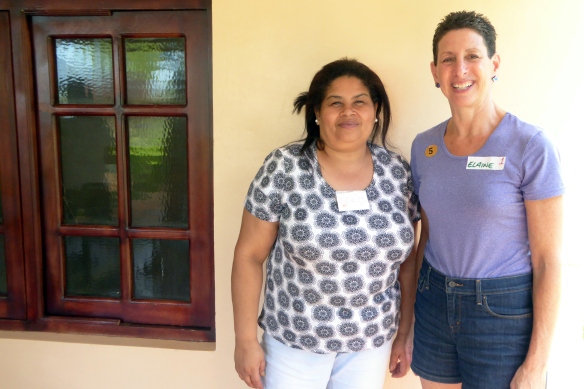 Bruce’s student got bored quickly, so he was moving on to other lessons to keep her interest.  She wanted to stick with the ones she was good at, though, and move on to a new one when she found the lesson to be too difficult.

Bruce and his student

They were sitting right next to me and Doris, so it was easy enough to ease drop.  I only wish the little girl had ease-dropped on my barking and yelled out, “Dog!”

It was an enjoyable afternoon, though, and the students appreciated our efforts.  After the lesson, we met back up at the community center for some group photos.

4 thoughts on “HABLA INGLES? TEACHING ENGLISH IN THE DR”