Although we were hoping to teach English at the University for our final Impact Travel activity, the students were on break for the Easter holiday.  Instead, we returned to RePapel, the women’s co-op that turns waste paper from the local community into recycled paper products that are sold for a profit.

I knew from our previous visit that our group of fellow Fathom passengers would be greeted by the women with enthusiastic singing and clapping.  It was fun, though, to watch the surprised expressions on the group as they walked up the street to the co-op and heard the women singing up ahead.  Smiles broke out as they rounded the corner and saw the women of RePapel dancing and clapping as they sang to us. 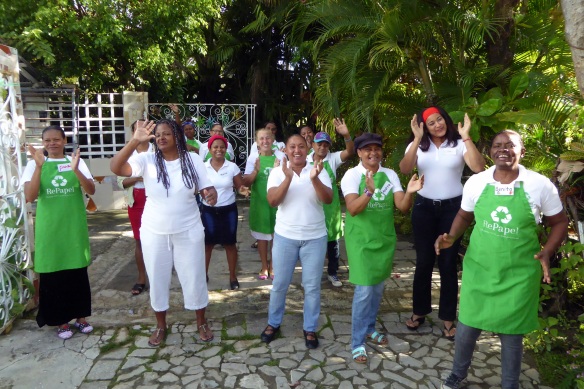 One-by-one, I scanned over the singing ladies and recognized each one from our January visit.  It was Claribel I was looking for, though, because we had made such a positive connection when we worked together last time.  Would she remember me?

Claribel was off to the left side, and I quickly took a photo of the women.  When she spotted me, her expression changed as if she was deep in thought.  A few seconds later, she flashed a huge grin as she remembered who I was.  I made a heart sign with my hands (as she did to me when we said goodbye in January), and she ran over to greet me with a big hug.

Making paper with the ladies is so much fun, because they keep up a positive energy with their singing.  In between songs, Claribel and I communicated as we did last time—through hand gestures and my (very) broken Spanish.  She asked me if Bruce and I had children, and then I asked her the same question.  Claribel responded that two of her seven children were twins. 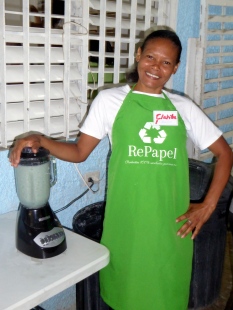 As it turned out, there was a family on board with teenage fraternal triplets, and they were standing right behind me as Claribel and I talked.  The mom chimed in saying, “You have twins?  I have triplets!”  Claribel didn’t quite understand the word “triplets” until I grabbed three of my fingers and held them together with my other hand and held it up.  In perfect English, Claribel exclaimed, “Oh my GAAAD!!”  We couldn’t stop laughing.

This is typical of what it’s like to make recycled paper (and paper bead necklaces) with the women of RePapel.  Never a dull moment! 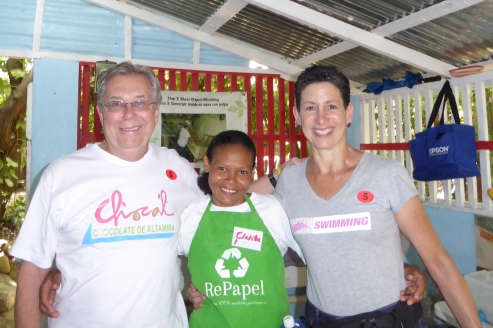 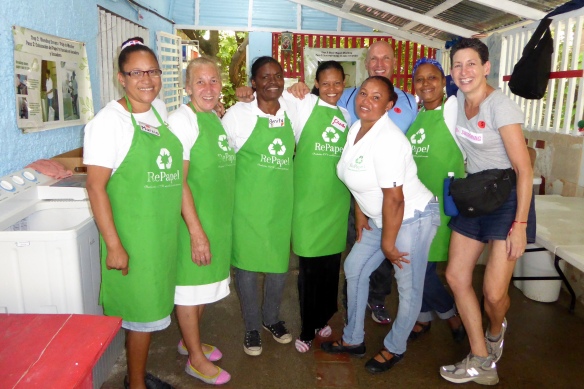 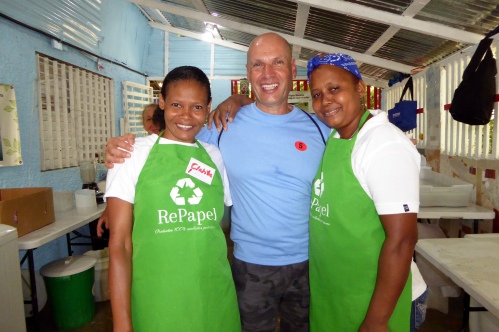 Fredy is from Colombia and also has an apartment in Atlanta.  We enjoyed getting to know him during the cruise. 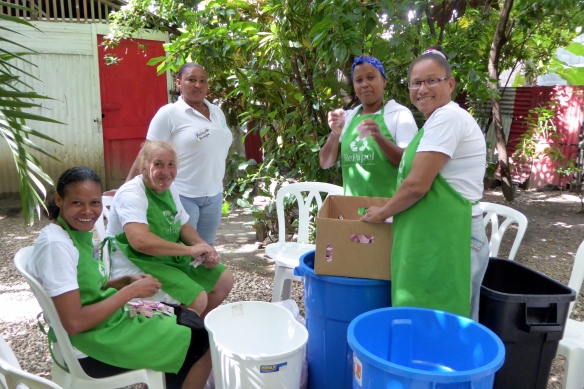 The women were ripping up waste paper into small pieces that will get thrown in a washing machine for a cycle– the early steps of the paper recycling process. 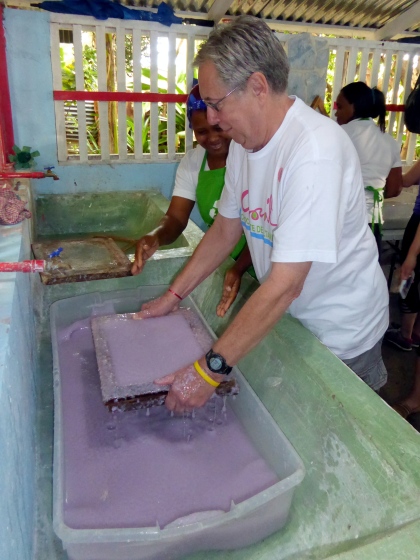 After a cycle in the washing machine, the paper/water mixture gets scooped up and tossed into the blender for a whirl.  Next, it is dumped into this bin.  Bruce was given a framed screen to dunk into the mixture.  Once the screen is covered, it is lifted and drained. 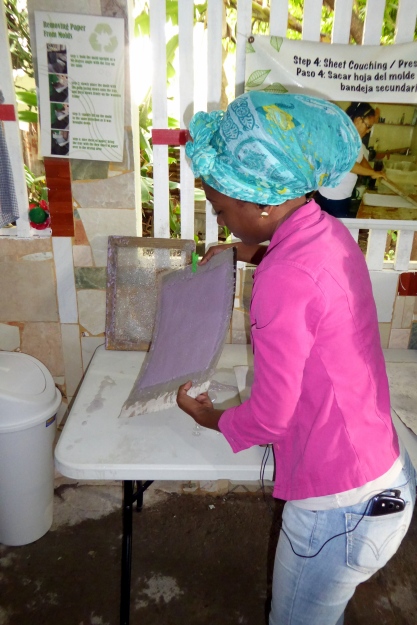 The IDDI facilitator joined in the production line. Here,  she is taking the piece of paper she had removed from her screen and getting it ready to place on the drying rack out in the sun. 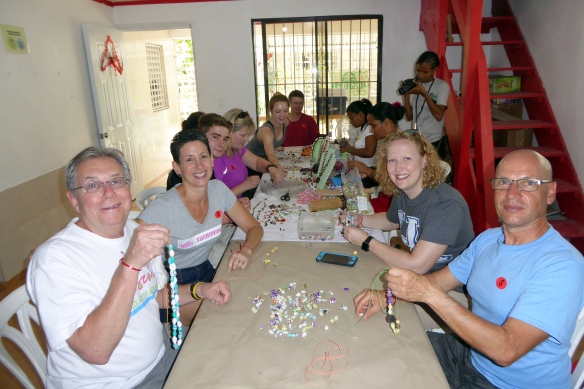 We also made paper beads and strung necklaces to be sold in the gift shop.  Bruce and Fredy show off their creations. 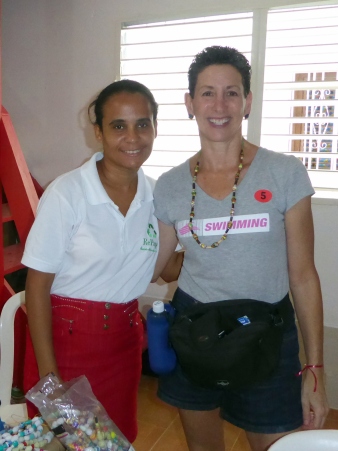 I’m modeling the necklace I made.

The following are scenes from the community.  Some of the pictures were shot from the bus window as we arrived, and others were taken during a walking tour we took after we worked at RePapel. 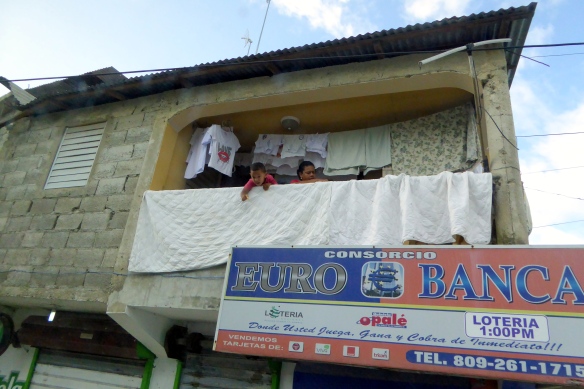 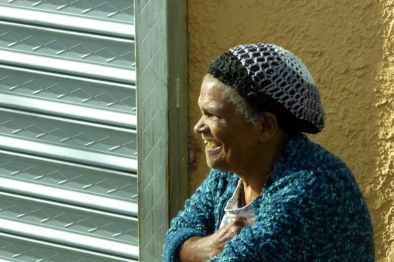 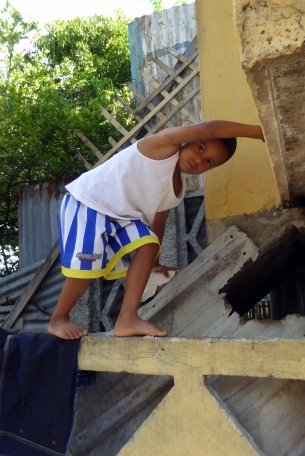 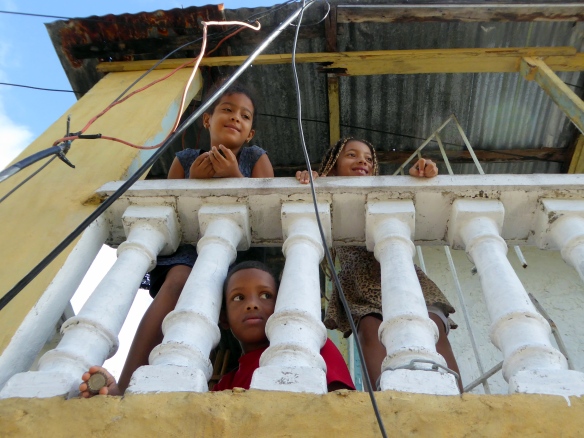 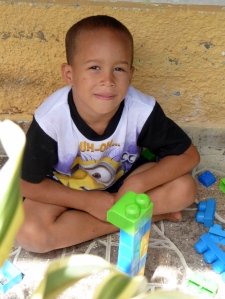 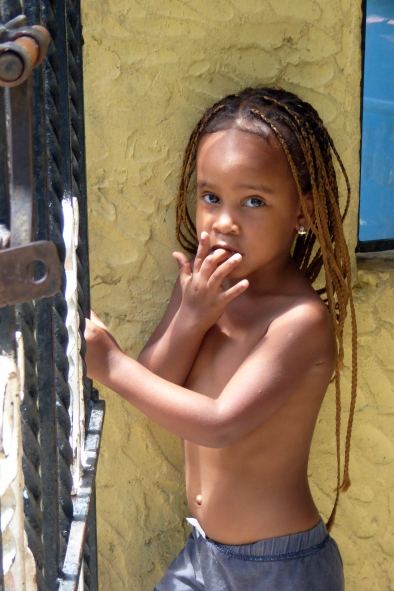 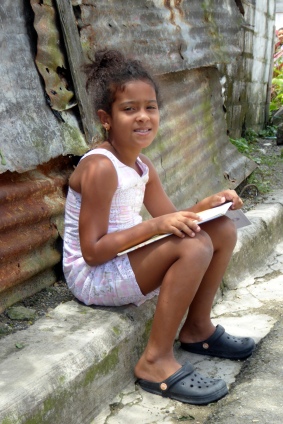 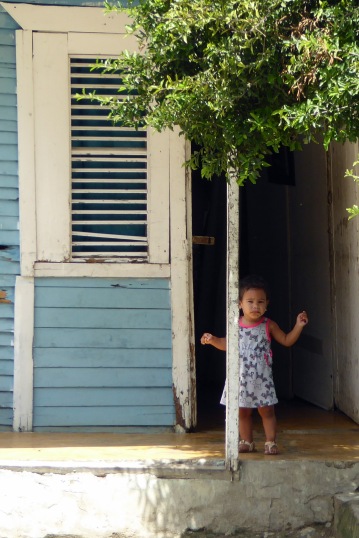 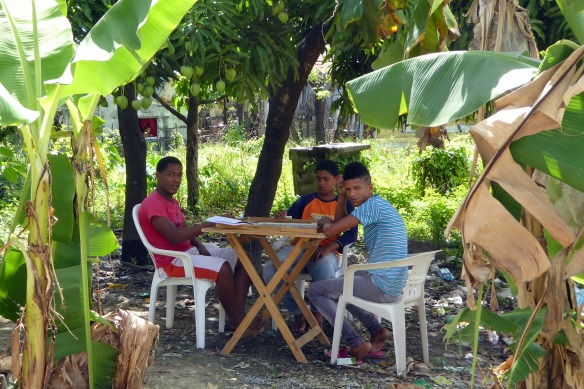 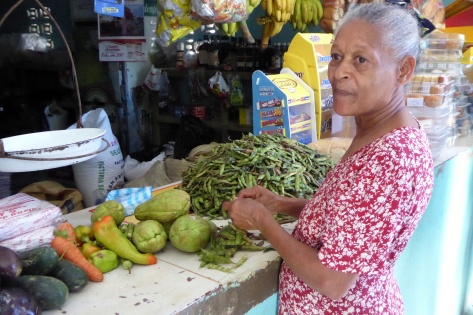 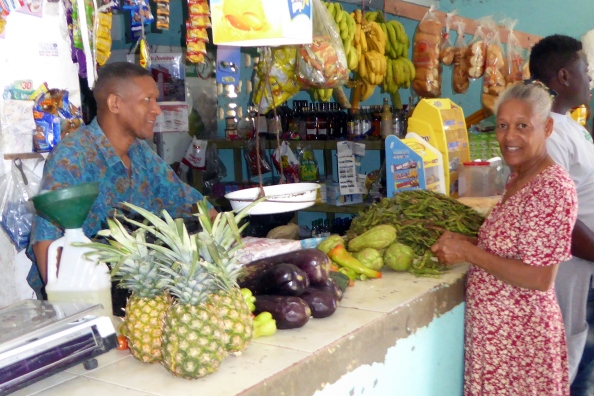 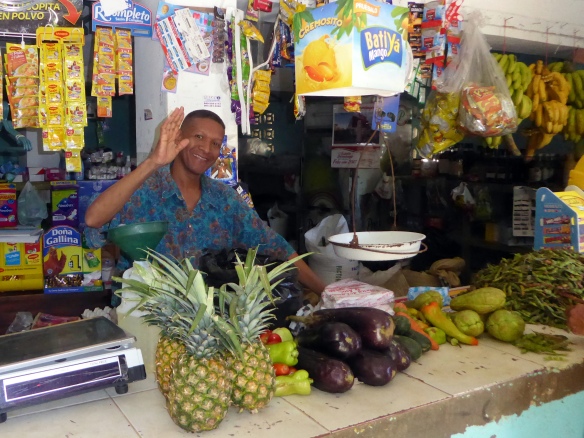 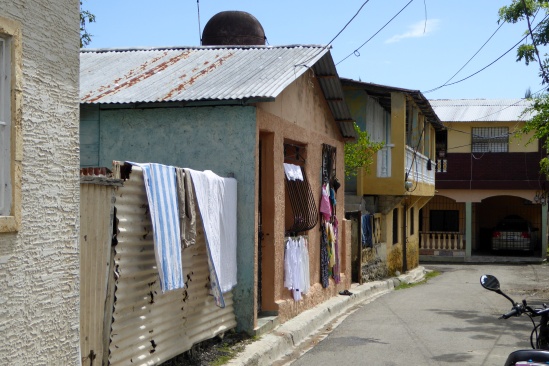 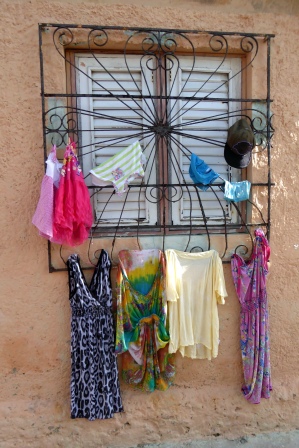 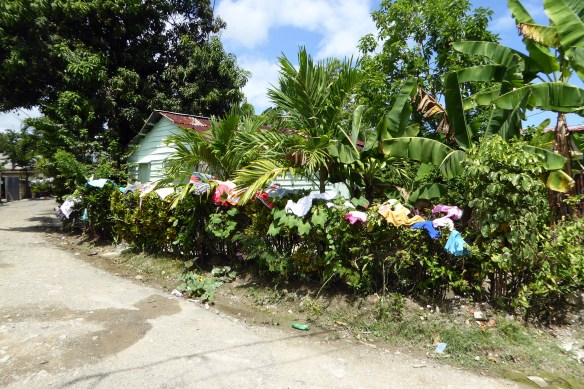 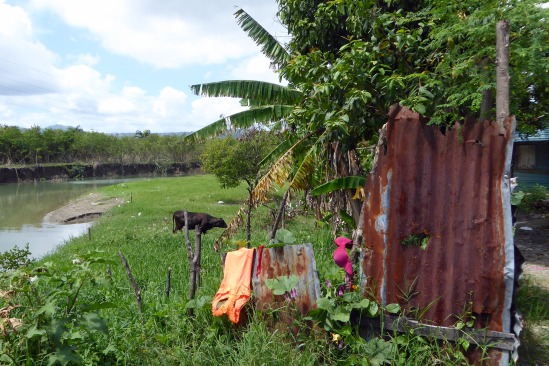 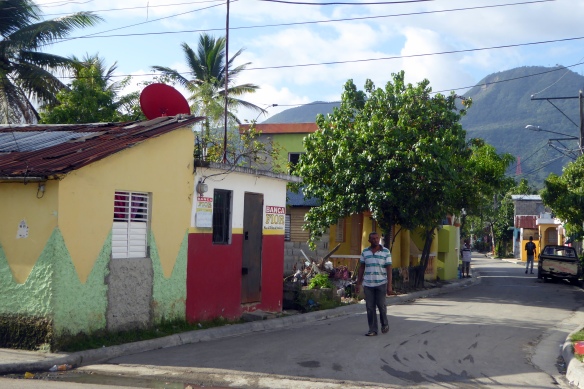 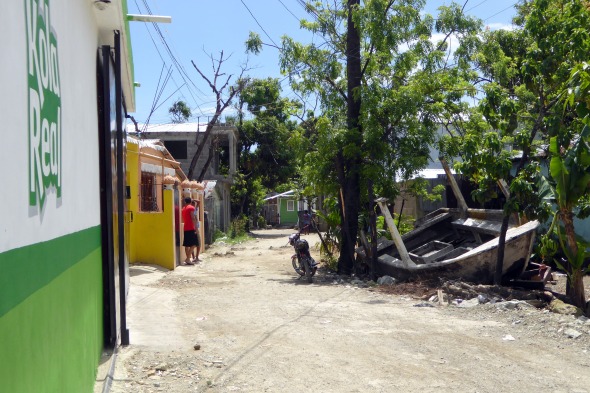 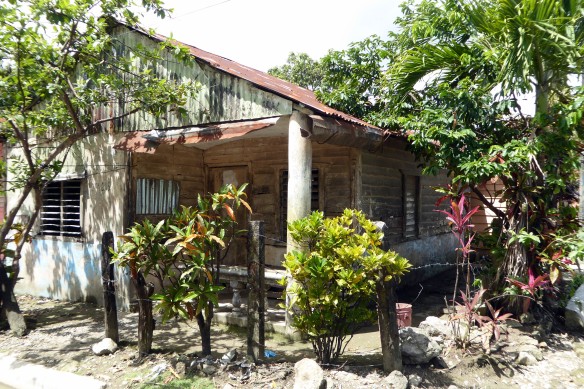 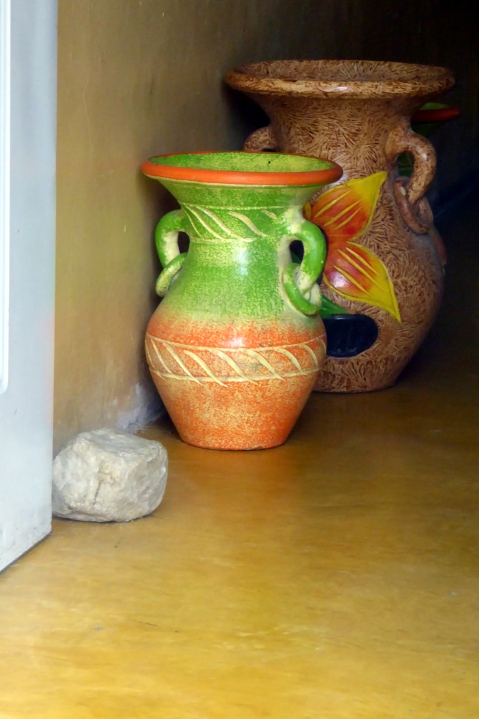 This concrete floor was made by Fathom Adonia passengers.  The homeowner was given the choice of what color to paint it, and yellow is the most popular choice.

Next up:  FATHOM:  OUR FINAL CHAPTER

2 thoughts on “OUR REUNION WITH THE WOMEN OF REPAPEL”