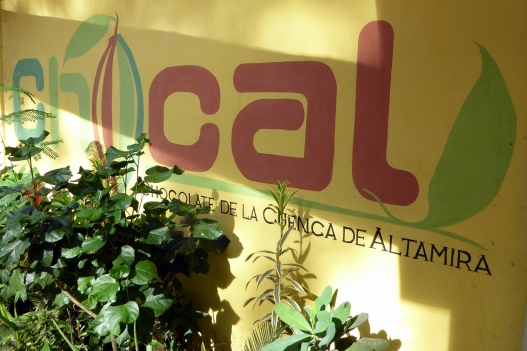 My last post about Chocal focused on the cacao plantation before the beans get transferred to the factory.  Those little seedlings we planted will take approximately 3-1/2 years to grow before the cacao pods are ready to be harvested for production.  May to July is the biggest harvest period each year, and a smaller harvest is done each November.

Each cacao pod yields 50-80 beans.  Four pods will yield 1-2 pounds of beans, which in turn yields one pound of chocolate. 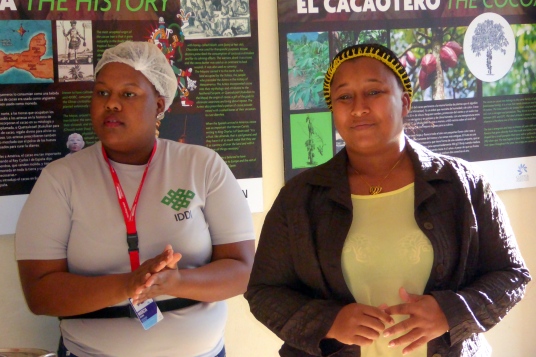 Marcia translates for Naomi, the vice president of Chocal Women’s Co-op, while she explains the chocolate-making process.

Once the beans are dried over at the nursery, they are ready to be sorted at the factory.  That was a job I nailed!  We were shown what “bad” beans look like, and which ones should be tossed aside onto a plate.  The good ones were to be thrown into the bucket.  While others got caught up contemplating whether each bean they had picked up was “good” or “bad,” I decided to look for the best beans and pick them up simultaneously with both hands.  Once I got two handfuls of beans, I tossed them into the bucket.  For me, this was so much easier and quicker, because a majority of the beans were “good.”

The buckets of good beans went on to the next step in the chocolate-making process:  roasting.  This is done for 20 minutes, and during this process, the shell of the cocoa bean separates from the bean kernel, and is removed.  The cracked beans—now called cocoa nibs– are then transferred to the winnower where 85% of the shells get separated from the cocoa nibs.  Next, the nibs are spread out on pans to be manually examined for any remaining shell fragments.

Steven explains how to remove the shell fragments from the cocoa nibs as Erin (right) looks on.

While some of our group worked on sorting the beans, others picked out shell fragments from the cocoa nibs.  After a while, the groups switched stations.

As good as I was at sorting beans, I was awful at picking out the shell fragments from the nibs.  My below-average dexterity, and my even worse patience with this task left me frustrated and hopping back over to “crash” the group at the sorting table.  I was there to work, not waste time getting frustrated over shell fragments!

While the co-op workers (including the sons of a few of the women) took our sorted beans and nibs to be processed (more on that in my next post), we were ushered into a room to learn how to mold chocolate.  Molding chocolate effectively requires expertise, so we didn’t actually mold the chocolate to be sold.  Instead, the process was demonstrated by one of the co-op women, and we were given an opportunity to make chocolates for our own consumption during the bus ride back to the ship.  The best part, though, was getting to sample the warm chocolate after we were finished.  Chocolate was spooned into our gloved hands for some good ol’ finger-lickin’ fun! 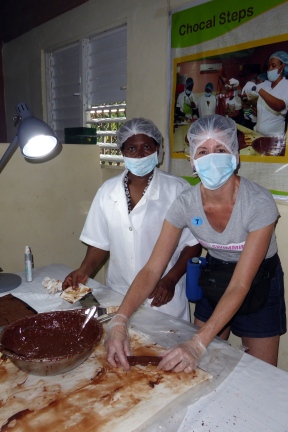 Finally, we finished our work in the packaging room.  During our three days, Bruce and I attached bar code stickers to the cocoa ball packages and stamped expiration dates on the chocolate bar labels, while others in our group packaged the bars for sale. 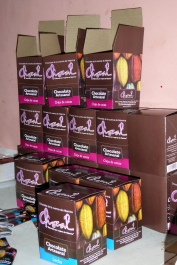 While we were in the packaging room, we could see the various chocolate processing machines and tables of molded chocolate bars through the glass windows.  I also had poked my head into the room off the back patio to see what the workers were doing with the machines there.  I was this close to the inner workings of a third-world chocolate factory—nothing like the modern Cadbury factories I had toured in Tasmania, Australia or Dunedin, New Zealand!

It was at that moment the idea was hatched to request a tour and explanation of the factory processes.

I explained to Orlando, one of the IDDI facilitators, that I am so passionate about chocolate and Chocal, that I would be returning with Bruce two more days to volunteer.  Could he possibly arrange for a tour of the factory for the following day during our visit?  We would be willing to skip out on the molding demonstration if we could just have a quick tour and interview with one of the women.  Oh, and could he translate, too?

Orlando promised he would arrange it for us, and he made good on that promise when we returned the following day.

Meanwhile, after we were dismissed from the packaging room, I made a beeline for the gift shop to make a quick purchase before the remainder of the group followed.  I was anxious to get back out on the patio and spend some time watching the women make cocoa balls, before it was time to return to the ship. 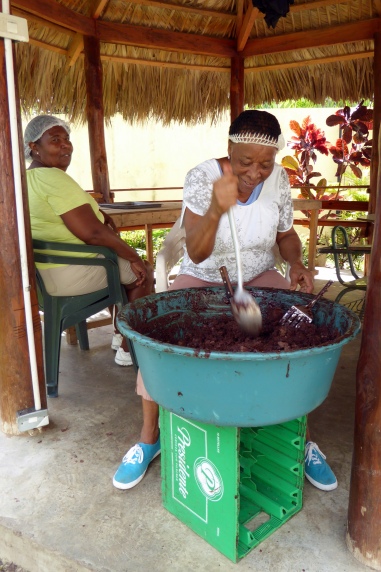 Preparing the pressed cocoa, so it can be shaped into balls to be used for hot cocoa

It was at this point I felt most frustrated at not having learned Spanish beyond a few basics.  I had so many questions I wanted to ask the women about their life in the DR, their families, and work at Chocal.  Instead, I made do with plenty of smiles and my extremely limited Spanish vocabulary. 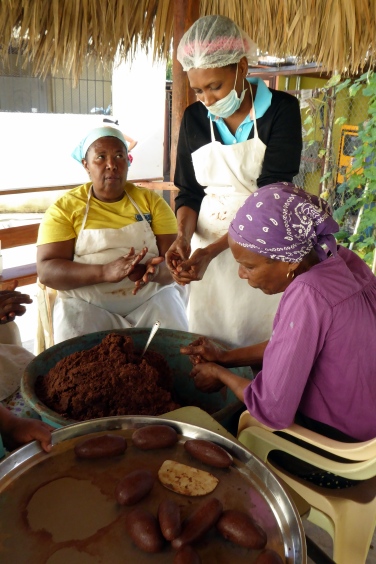 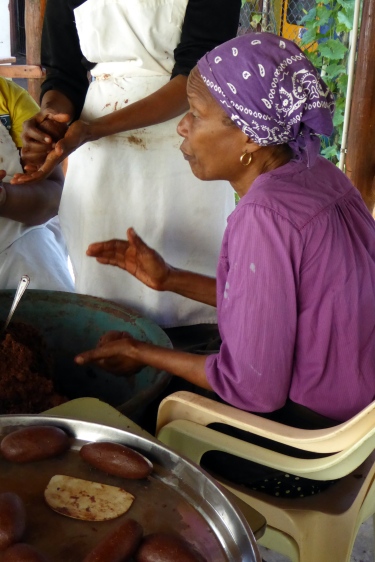 When it was time to leave, Bruce and I said, “Hasta manana!” and smiled at the women.  They responded with a confused look on their face, and “Adios!”  “See you tomorrow?  Really?  I don’t think so!” was what I’m sure they were all thinking—and saying to each other after we left. 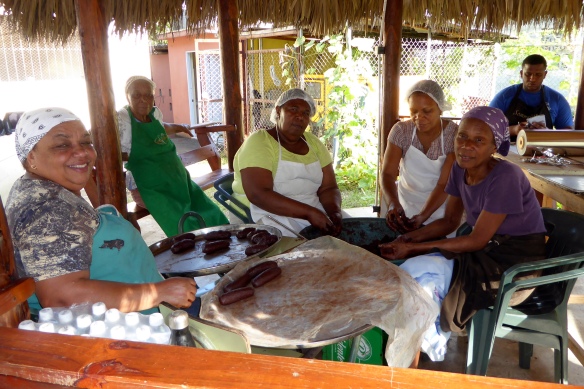 Milagros (left), and the women of Chocal make cocoa balls.

As Bruce and I happily savored our chocolates during the bus ride back, we expressed to each other how we were already looking forward to our return. 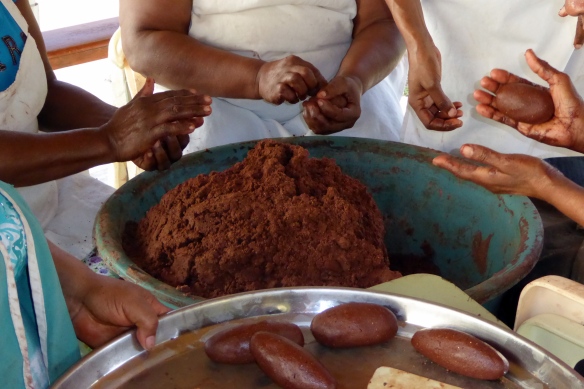