“Modern” Heidelberg can trace its beginnings to the fifth century (according to Wikipedia).  Is that “historic” enough for you?

Given the relative youth of the U.S.A., I am always amazed when I go to Europe and hear the age of the places I am exploring.  Greece blew me away!

Heidelberg may not be as old as Greece, but it’s old enough!

Located in the Rhine-Neckar Metropolitan Region, Heidelberg is a city of approximately 149,000 residents and is very picturesque!  We visited Heidelberg Castle, and the views down across the city and river were spectacular.

Check out the views from up here.  Amazing! 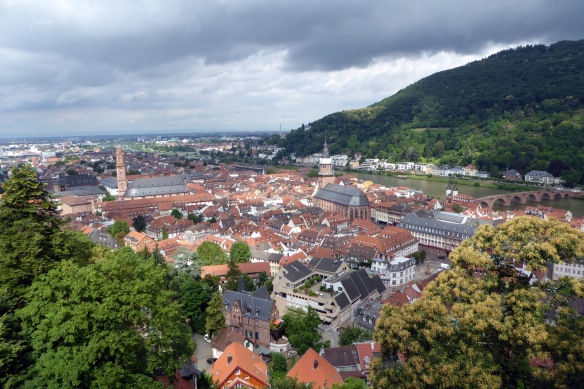 Among the most important Renaissance structures north of the Alps, the castle (and its ruins) is THE landmark of Heidelberg.  Originally built in the early 1200’s, that poor castle has had a miserable history of demolition.  In 1537, a lightning bolt destroyed the upper castle.  By 1650, the castle underwent an expansion, but it was later damaged by wars and fires.  Then, in 1764, another lightning bolt caused a fire which destroyed some of the rebuilt sections.  Misery.

Fortunately for us and the throngs of other tourists, there was plenty of intact structure to see while touring the exterior of the castle on foot.

There was so much to take in, and I was happy to be able to zoom in with my camera to see the details of the façade.  (We were also happy the threatening clouds didn’t burst into a full-assault rain storm!)

Following the castle portion of our walking tour, we rode the Heidelberg Bergbahn (Funicular) down to Old Town, a beautiful city full of baroque-style architecture.  Our tour continued, touching on the highlights, and ended at a restaurant where the River Voyager’s passengers enjoyed an organized lunch banquet. 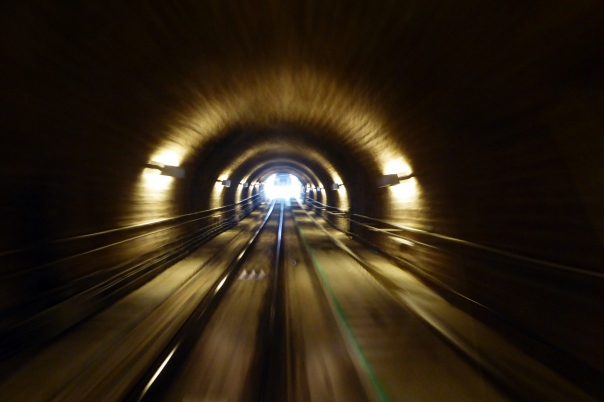 Not wanting to lose out on time to explore the town on our own, we got down to business, ate, and left.  After all, we figured we could always socialize with the other passengers back on the ship! 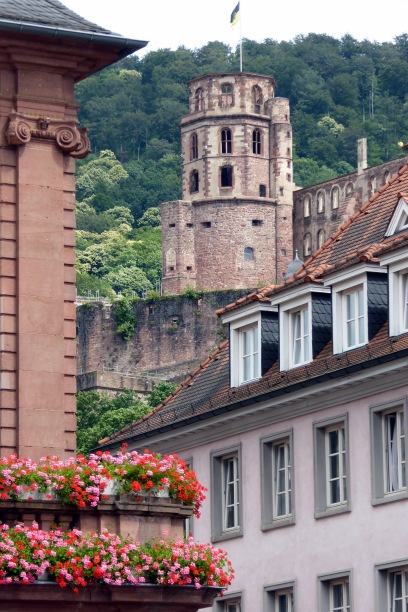 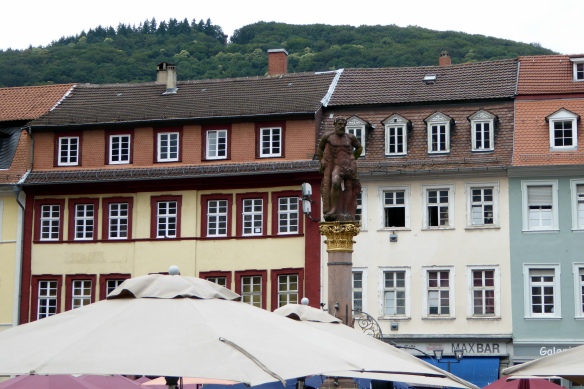 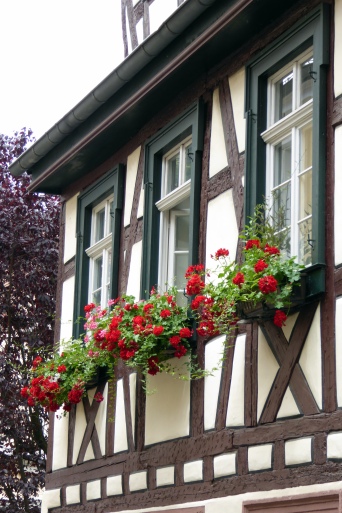 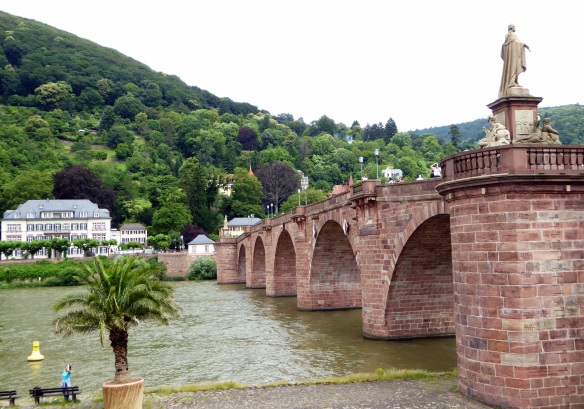 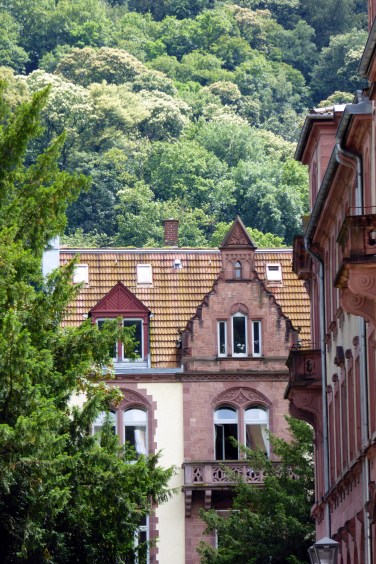 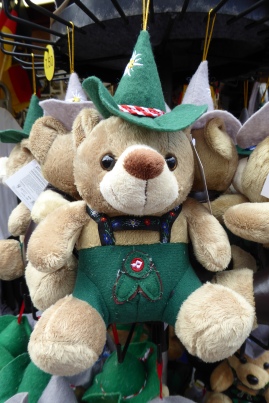 Our tour in historic Heidelberg concluded with a bus ride back to Frankfurt and the River Voyager, but our day was not done.  After all, we still had fantastic Frankfurt to explore on foot!

Not wanting to lose time before sunset, we ate a quick dinner in the Cotton Club Café and headed back out.  The following are scenes captured during our walk around town and the riverfront:

We walked along the riverfront towards the bridge you see in the distance.  Old Town was located adjacent to the second bridge. 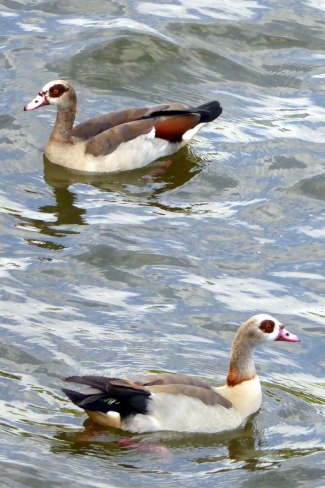 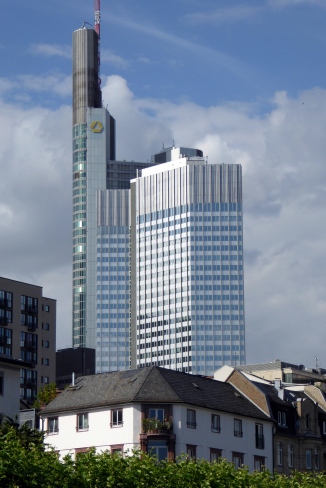 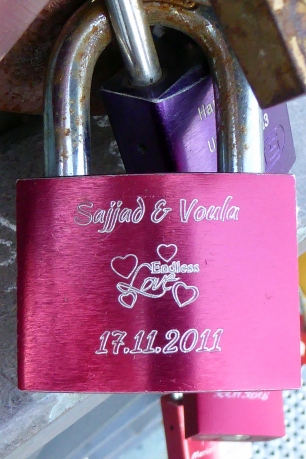 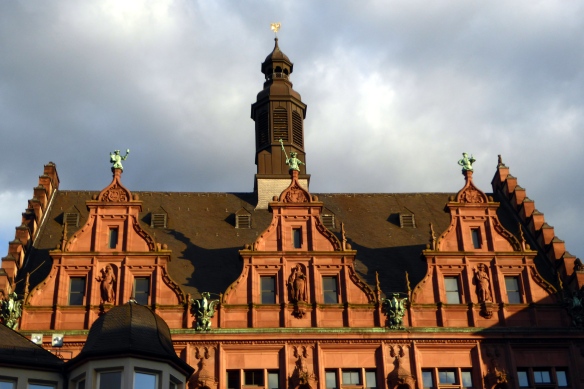 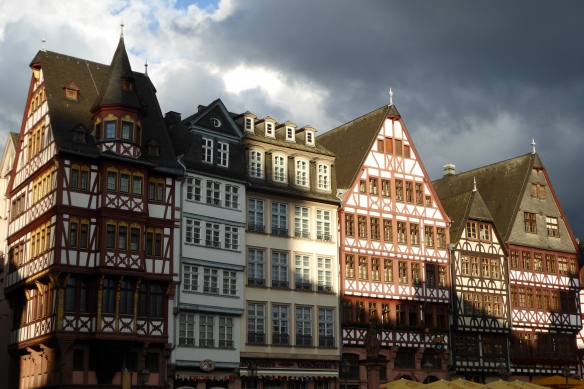 Coming up next:  Rudesheim