When Vantage Travel needed to change our European river cruise departure date, I had pretty much written off the idea of competing in the Georgia State Games Open Water Meet.  It was scheduled for the morning after our evening return, and I knew I would be leaving my suit at home and taking three weeks off from the pool.

It made me a bit sad, because even though it is not a pool meet, it’s my favorite local swim event of the year.  It’s also the third event of the Georgia Grand Prix Series, and I am leading the series in my age group.  After winning it in 2012, 2013, and 2014; I wanted to win it back after having lost in 2015 due to sitting out a couple of the events after having hip surgery and a set-back.

I didn’t discuss competing at the open water meet with Bruce, because I just knew he would NOT want to get up early the morning after returning from Europe.  Besides, I was having a problem with my shoulder that required a short course of physical therapy before we went to Europe.  On top of that, I developed an acute case of calcific tendinitis in my other hip while in Vienna, requiring an injection of a short and long-term anesthetic.  (Thankfully, it worked like a charm!)

Late in the trip, I finally casually mentioned the upcoming meet to Bruce, and he said, “Well, are you going to compete in it this year?  I think you should!”  Really?  I couldn’t believe my ears!  We agreed to see how my hip was doing after our return and whether we would be up for peeling ourselves out of bed for the 1-1/2 drive to Lake Acworth.

Thank goodness traveling west is easier on the body than heading east.  Neither of us have jetlag when we travel west, so we were in luck.  We crashed by 9:00 PM last night (3:00 AM our body time), got a good night sleep, and woke up refreshed this morning.  We took one look at each other and said, “Let’s go!”

I was so excited, I felt like a retriever puppy waiting to get released from my leash, so I could go chase thrown sticks in the water!  We piled our gear into “AQUADOG” and hit the road.

Arriving just in time for the 3K start, my heart skipped a beat as I saw them take off.  The 3K is my favorite open water race, but I knew I shouldn’t push it, so I settled on racing the 1K instead.

After three weeks out of the water (even longer than after my hip surgery), it felt SO good to be back in!  The rest did my body good, though, and all four cylinders were working great.  I won gold (although there was only one other gal in my age group), my time better than last year, and it was a lot of fun.  My win also mathematically eliminated my competition in the Georgia Grand Prix Series!

Thanks, Bruce, for your love, support, and encouragement!  I love you!! 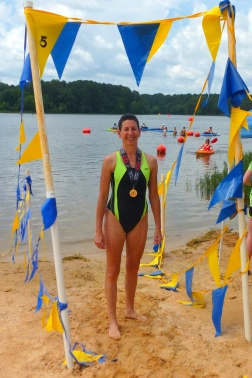 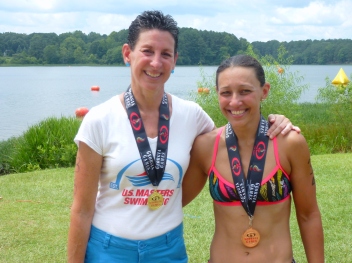 Last year, Loukia and I were side-by-side and really pushed each other during the last half of our 1K race.  I won, but she beat me this year!  (Thankfully, she is in a younger age group, so I was able to still win gold.)

Stay tuned for blog posts about Europe.  After I edit the TONS of photos I shot, I will start posting the blog posts I wrote off-line and include my favorite shots.