In my August 14, 2011 blog post, I SEE MORE WITH A CAMERA IN MY HAND, I wrote about the details I discovered when photographing macro—things I would ordinarily miss when I am not shooting pictures.  Some people would argue that travel photographers miss what is going on around them while they are shooting photos, but those of us who take the time to study our subjects and compose our shots (rather than carelessly snapping away) would passionately disagree.

Sure, there have been plenty of times I have quickly snapped shots on the go when I didn’t have the time and luxury to stop, but given the opportunity, I thoroughly enjoy taking the time to study my subjects.  Beautifully displayed fruit, photographed for my 2011 blog post are a perfect example.  Having a camera in my hand inspired me to stop, study, and shoot.  I left with a greater appreciation of the beauty of the fruits and vegetables I enjoy eating so much, because I saw them as more than just food.

Today, after dropping Bruce off for kayak fishing, I grabbed my camera and took a stroll along the shoreline near the boat ramp.  The previous day, we had seen hundreds of crabs scurrying about in the sand, but we didn’t pay much attention as we launched our kayaks.  This time, though, with camera in hand, I bent down to study these little creatures and see if I could photograph one before it ran off.

Setting the camera to shoot macro, I was able to fill the frame with this little guy that was perhaps an inch wide.  As he stared at me with his claw open and ready to defend himself, I admired his interesting features.  Who knew a little crab could have such fascinating eyes?

ollowing my short stroll along the Guana Reserve shoreline— there was no way I was going to venture too far off the beaten path and meet up with another alligator—I made my way to the beach to enjoy the sound of the Atlantic Ocean waves crashing on the shore.  The tide was low, so the beach was very wide and full of little shells that had been deposited in the sand by the rolling surf at high tide.  As I gazed out at the waves and reflected back on my kayak surfing days in California, I could hear the crunch of the shells underfoot as I made my way along the beach.  I didn’t give it much thought; the sound was appealing to me, so I continued to absent-mindedly walk across the shells.

I had my camera with me, though, and the mood struck to bend down and take a look at what was creating that crunching sound as I strolled along the beach.  At that moment, I discovered just how beautiful all those tiny shells (most no larger than my smallest fingernail) were that I had previously taken for granted and not given much thought about.  I never knew what I had been missing until then—one of life’s little pleasures. 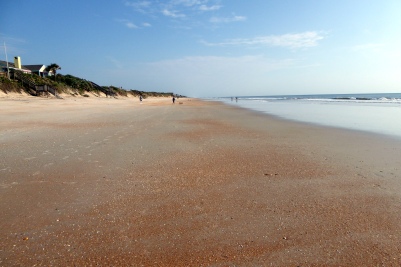 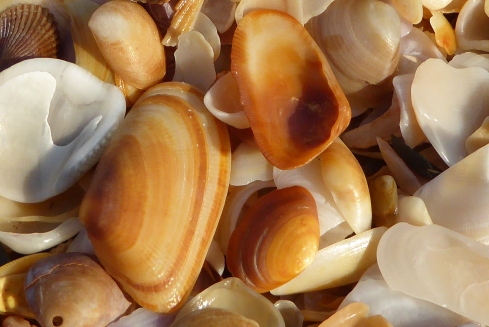 4 thoughts on “LIFE’S LITTLE PLEASURES: YOU JUST MAY NEVER KNOW WHAT YOU’RE MISSING”