When Bruce and I travel we enjoy seeing how the locals live, where they shop, and what they do during their leisure time. It’s that “When in Rome, do as the Romans do” thing that can give you a feel for the place and its people.

On Fridays, the locals head to the Green Dragon Market in Ephrata to shop for just about anything and everything you would need (or don’t need, for that matter). It’s a swap meet and farmer’s market all mixed together in a huge outdoor area and a couple of (non-airconditioned) buildings.

Amish and “English” alike sell their wares and shop there, and it’s a great place to people watch and eat the local foods.

There is even a special parking place just for the Amish: 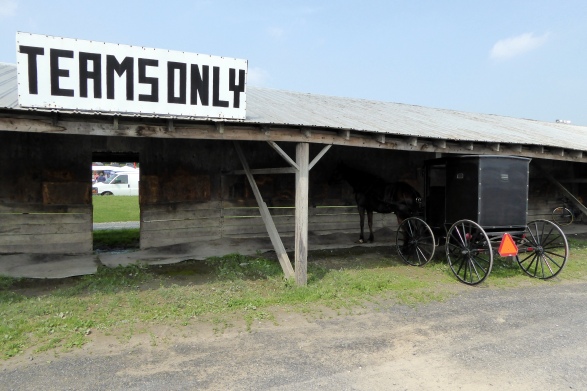 Prices at this market were fantastic. Gorgeous hanging baskets of flowers were only $10, a bargain! 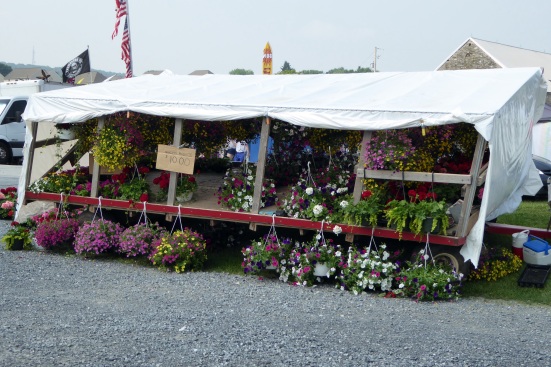 How about an entire shoo-fly pie for $3? This molasses pie is an Amish tradition. It gets its name because the sweet molasses odor attracts flies that must be “shooed” away.

Not wanting to indulge in an entire pie, we later bought ourselves a piece to share. It was good, but I’ll stick with my chocolate, thank you very much.

These pretzels were being handmade at a table directly behind this glass case:

Need some dog bones? How about some medium knuckles? YUM! 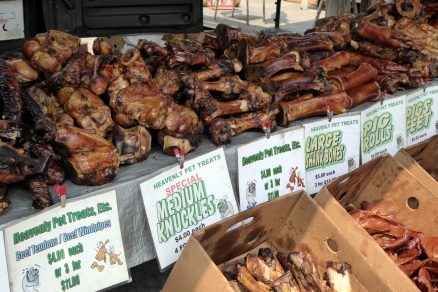 Next up on our market run was Central Market in downtown Lancaster. A Lancaster tradition since the late 1700’s, the building was beautiful brick, and its interior housed stalls with all sorts of foods. Prices were much higher, though, not the bargains that we saw at Green Dragon Market. That huge shoo-fly pie for $3 shrunk down to just six inches.

The Landcaster Visitor Center was located near Central Market.  This building also dates back to the late 1700’s. 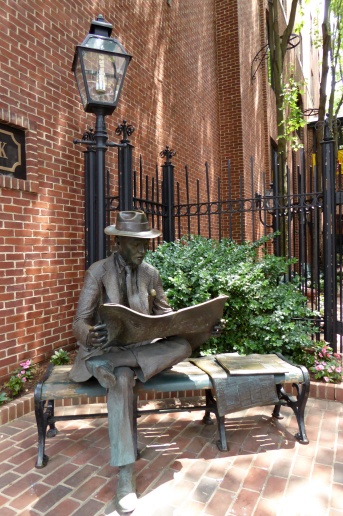 This dapper fellow was reading the newspaper in front of the Press Building on King Street.  We were amazed at the incredible artistry in the detail, all the way down to his wing-tip shoes.

Here’s some interesting trivia about Lancaster: Did you know it was the capitol of the United States for one day? Yep! On September 27, 1777, Lancaster was our capitol. On each September 27 now, the city officials commemorate the day with a 15-minute ceremony.

Our final stop on the market run was… COSTCO! Well, shoot, why the heck not? I was due for a nice fresh salad after making a breakfast (and lunch) of Amish bakery, and we like to check out the Costco in other places if it’s convenient.

This Costco was very different, though. Does your Costco have one of these in the parking lot?

Yes, the Amish do shop at Costco, too!