It has been such a full day, it’s hard to believe it was actually this morning when I started the day with a swim (my third day in a row!) at the motel pool in Hershey. We experienced so much today, I had to stop and think for a moment where the day began.

Our day continued in Lititz, a town designated by Budget Travel Magazine as one of 2013’s Top Ten Coolest Small Towns in America. Honestly, our initial reason for stopping in Lititz on the way to Lancaster was to tour the Julius Sturgis Pretzel Bakery, and visit the Wilbur Chocolates Factory and Museum. When we arrived, though, it was love at first sight. What a charming historic town it turned out to be! The stone buildings I photographed dated back to the 1700’s, and we soon realized why Budget Travel Magazine selected Lititz for their list. 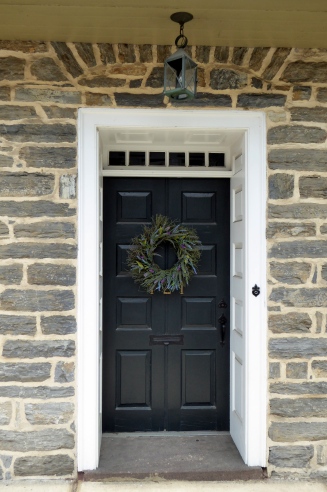 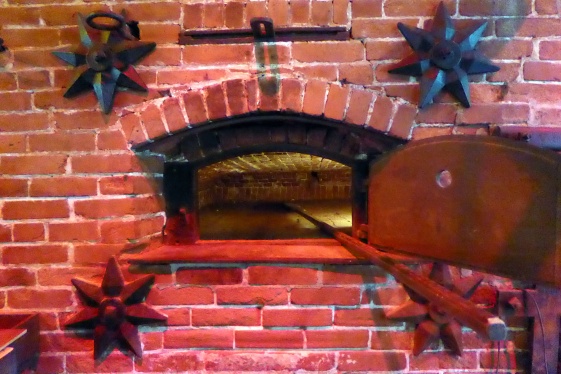 Bruce and I had never toured a pretzel bakery before, so we enjoyed seeing the old brick ovens where Julius Sturgis first made his pretzels back in 1861. Those were soft pretzels at first, but an “Oops!” turned into a great discovery, and the hard pretzel was born. We enjoyed both versions; the soft pretzel at the factory and these “Horse and Buggy” pretzels later this afternoon. (Note the cover model of this magazine. The Amish don’t like to have their faces photographed; however, this one is smiling directly at the camera. Is this gal really Amish?)

At Wilbur Chocolates, a chocolate company dating back to the late 1800’s before Hershey Chocolates were around, we discovered they were the first to make what Hershey Chocolates calls “Kisses”. Wilbur’s “Buds” were produced in 1894, thirteen years before “Kisses” were created. Hmmm…

Although the museum at the Wilbur Chocolate Factory is small, they had quite a collection of antique chocolate molds, chocolate-making equipment, cocoa tins and other items that I found quite interesting. 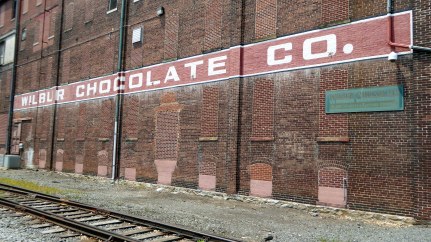 Our day continued by making our way south to Lancaster and getting checked into our motel before heading out for our three-hour evening “Amish Experience VIP Tour” that began at 5 PM.

As with almost everything else we have done on this road trip, this was a highly rated Trip Advisor find that turned out to be a fantastic experience.

For starters, we liked the fact that groups were limited to 14 people, and the shuttle bus was very comfortable. It was a very hot day, so the airconditioning was a welcome reprieve in between stops.

Joe was also an excellent tour guide who was quite knowledgeable about the Amish and did a great job answering our questions. Although, what we discovered while listening to his answers was that the Amish traditions and way of life are as clear as… MUD. Black and white they are not, rather, shades of gray would be the best way to describe their beliefs.

Take the use of electricity, for example. Like many people, Bruce and I had the misconception that the Amish do not use electricity at all. That is what we had heard and learned in the past; however, they just don’t use electricity off the grid. Instead, they will create electricity using a diesel-powered generator which must be housed in its own building according to Amish beliefs. The electricity is then used for air compression and machines to milk the cows.

In the home, batteries are used to provide electricity, and they even now use solar energy.

Another dispelled misconception was the use of telephones. The Amish do have phones; however, they are kept outside of the home in little huts or “shanties”. Although most don’t use cell phones, some do; however, they are simple stripped-down basic models.

The Amish are not allowed to own or operate cars; however, they are permitted to ride in cars, buses, and trains. They also forbid the use of inflated tires for their wheels, so bicycles are a no-no, but self-powered scooters are ok.

Are you confused yet? I was, and the best way I could describe their rules is “squishy”. “Gray” or “squishy”, it had me stumped.

Their philosophy and way of life boils down to this: Convenience and mobility is for the “English” (non-Amish) and not for the “Plain” (Amish). The idea is they value keeping the family unit close to home. Cars are too easy to hop in and go wherever you like, such as the road trip we are on that is taking us throughout many states. Riding on a bus or train takes much more effort, though, so the Amish think twice about making that effort. Bicycles, too, are much easier and convenient than scooters that are much more difficult to ride over long distances.

Telephones are kept outside the home so as not to create an intrusion or disturbance. (Oh, how I wish the “English” felt that way about cell phones!)
The basic philosophy we understood; however, the way it is interpreted by each Amish group (and their elder who enforces the rules) is a puzzle that nobody outside of their community has solved. It really depends on who the enforcing elder is and their interpretation of what’s convenient and what is not.

Traveling in a horse and buggy is definitely NOT convenient. It takes about 1-1/2 hours to travel 18 miles. (And, speaking of buggies, they aren’t inexpensive either. They cost $9-10,000 depending on the included features.)

Back to our tour, Joe took us to meet three Amish families on their separate farms. Levi and Fannie Fisher had a dairy farm with 40 cows they milk by machine yielding them 8 gallons each day from each cow. Hold on, make that 41 cows. This little cutie was just born yesterday!

Now, those 40 cows eat A LOT of food each day, so they also raise alfalfa and corn to feed them. Since modern machinery isn’t permitted, the horse power used in the fields are– horses (and mules). 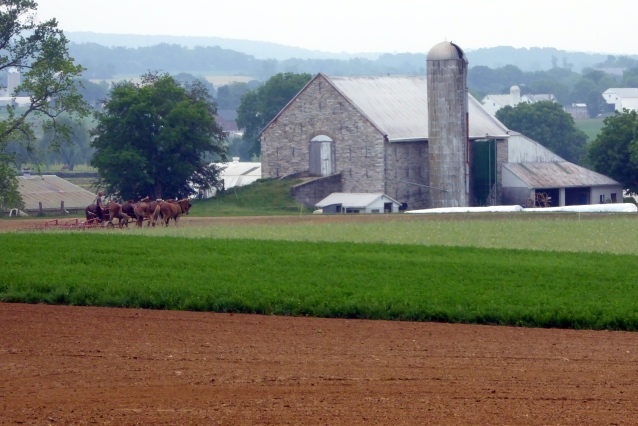 Levi and Fannie work hard tending to their farm, as do their eight children. Like other Amish families, they raise their own fruits, vegetables, and herbs. All of their clothing is handmade and washed by hand as well.

Since convenience has been (mostly) taken out of the equation, it’s a very long day for them to get all of the tasks accomplished. Their day begins at 4:30 or 5:00 AM milking the cows (they have to be milked twice each day), and it doesn’t end until sundown. Even then, there are times they have to work the fields into the night.

Strong work ethic? Yes, definitely, and the reason why Amish families are so large. Children are needed to get the work done, which is also the reason why their education typically ends after the 8th grade is completed.

The Amish don’t attend “English” schools either. They are taught in one-room schools by their Amish teachers, and children of all ages learn in the same classroom.

Since two different German dialects are spoken exclusively in the home, young children don’t speak any English until they go to school at the age of 5, and learn English in the classroom. By the time they have completed their education, though, they are trilingual, speaking the two dialects of German as well as English.

Have you ever wondered like I have about their clothing and beards? The Amish are still wearing the style of clothing that was worn when they first formed as a group back in the 1600’s in Switzerland when they split from the Menonites. Men don’t grow beards until they are married, and the women start wearing white “prayer caps” when they are 15 or 16 years of age.

Zippers are not permitted to be used in their clothing; however buttons (and sometimes snaps) are. Clothing must be plain and subdued, and women must wear dresses. The men have buttoned flaps in the front of their pants.

You might think with all of these strict rules and the hard life they lead in our modern society that the Amish will soon be a thing of the past. At this point, there are only about 300,000 Amish in 32 states and Canada; however, their numbers are actually remaining strong due to the 85-90% rate at which adult Amish men are choosing to join the church rather than leave the Amish way of life. (By the way, the Amish are NOT shunned if they leave their community and decide at a later date to return. According to Henry and Emma Fisher, the third family we visited, they are warmly welcomed back.)

Before we met Henry and Emma, we visited another family who had a nursery. It was a beautiful setting, and we enjoyed getting to know the family and their business as well as watching their children play and visiting their animals.

The evening concluded at Henry and Emma’s farm, where we were taken for a tour of their home and gardens before sitting outside in a conversation circle to ask questions and hear about their way of life. 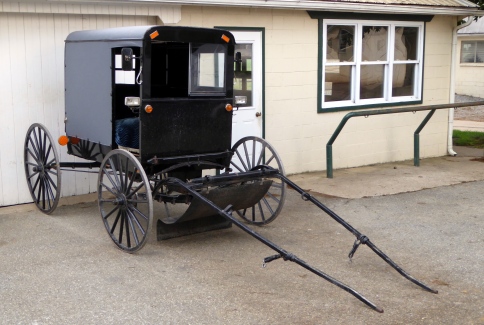 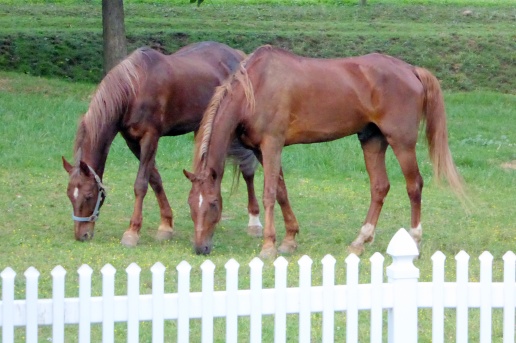 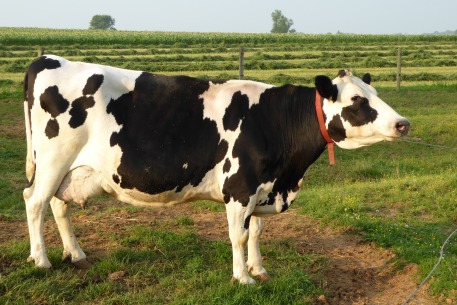 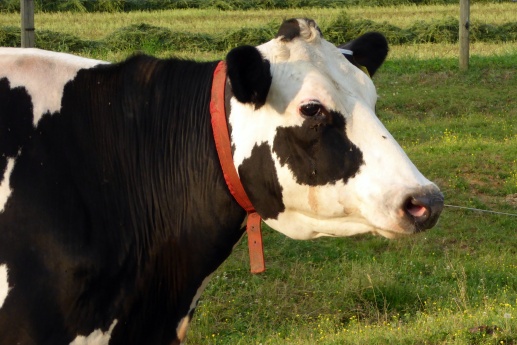 While we were there, it was a whirlwind of animal activity. Their son was tending to the horse and buggy when another family came to visit in their horse and buggy. Between the dogs they brought with them and the dogs the Fishers had as pets, it was a humorous three-ring circus when something would excite one of the dogs, and they would all chase along with him barking the entire way.

Meanwhile, Tina, their beautiful husky wanted no part of it preferring instead to hang out with us and get petted. Their cat seemed to feel the same way.

Henry and Emma were just as curious about us as we were about them. Henry wanted to know what we each did for work, and they asked us plenty of questions, too. They host a tour once each week for extra income, and they seemed to enjoy it as much as we did! It was a wonderful way to end an interesting and fascinating day!