I’m like a Timex watch; I take a lickin’ and keep on tickin’.

Having a left leg 1/2″ longer than the right and a pelvis that tilts to the right throws the entire body out of proper alignment, and is one of the causes of many of the injuries I have experienced. Couple that with inheriting a whole host of ugglies from my father, including severe degenerative disk and joint disease, I am an accident waiting to happen.

Just as I was finally getting my injuries under control and having great results from trigger point dry needling physical therapy, I showed up to U.S. Masters Swimming Summer Nationals with what I thought was a mildly strained muscle in my torso. Swimming made it feel better; however, I think I jammed my leg and hip on a misstep on uneven terrain. On the night before my biggest day of competition, I had severe muscle spasms and was up all night. So, the following morning, I went to the sports medicine massage tent, prior to my 400 Meter Individual Medley race.

As it turns out, the muscles spasms had caused my 1/2″ longer left leg to appear to be 1-1/2″ longer, according to the therapist, Chuck. He said I had a subluxation (dislocation) of my last rib which is a floating rib. The dislocated rib was pressing on my kidney, causing the pain. So, he did what he could to get the spasms under control, however, he wasn’t qualified to set the rib back in place. He said to return on Sunday to see Dr. Mike.

Unfortunately, Dr. Mike didn’t arrive until I was just about to swim the 200 Meter Butterfly, so I had to see him after the race to get my rib set. As it turned out, I ended up racing my 400 IM, 200 breaststroke and 200 fly (three of the most difficult races in competitive swimming) with a dislocated rib poking my kidney on every stroke.

Although I was unable to race at my top speed, I completed all of my races successfully without getting disqualified. I ended up 9th in 200 Meter Breaststroke, winning my first individual Nationals medal (top ten win medals) and placed 4th in 200 Meter Butterfly for my other individual medal. My time was 1:13 slower than when I raced the same event last summer at a long course meters meet at Greenville (and much slower than my 2,000 yard butterfly pace), but I did it!

Now, there is a disclaimer I should add to that 4th place. Out of 88 women competing in my age group, only seven signed up to race in that grueling event and five showed up to the blocks to race it. And, one of the women got disqualified. Hey, you can’t win a medal if you don’t show up!

Of the five individual races and one relay I competed in, the highlight was racing breaststroke in the Women’s Mixed Medley Relay (and winning my third medal) with three of my teammates, including Diann Uustal, a multiple world record holder. Only seven of us from Georgia attended Nationals, so I was fortunate to have that opportunity. Not only is Diann the best in the world in her age group in freestyle and backstroke, she is a class act. When I first saw her at the pool upon arrival, she ran up to me, gave me a hug and said, “I get to swim on a relay with you!” I looked at her stunned and replied, “Uhh, I think you have that backwards. I get to swim with you on a relay!” And, after the relay, Diann actually thanked me for swimming on the relay and gave me a big hug and kiss afterwards. 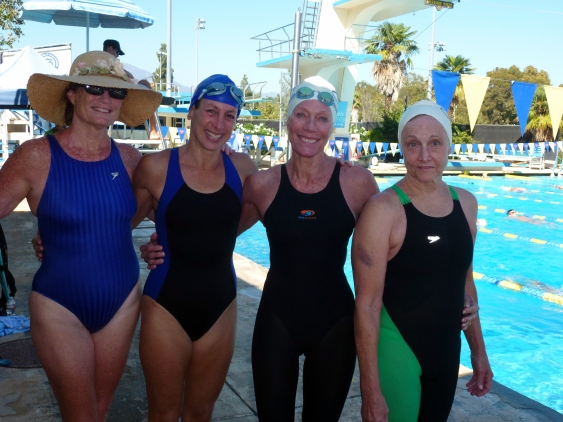 Relay teammates Lisa Watson, Diann Uustal, and Francine Williamson.  We placed 6th and won a medal, my first of these Nationals.

The icing on the cake was arriving to the starting blocks for the race, looking over to the next lane to check out my competition, and seeing my good friend Deb smiling back! We knew each other would be competing in that relay, but we had no idea it would be in the same heat and neighboring lanes. Awesome! Her team ended up placing 3rd and we placed 6th, however, I was ecstatic. It was Deb’s first ever medal and it meant the world to her competing with her teammates, just as it meant for me to race with mine.
As it turned out Deb’s team, Arizona Masters, won the meet with their contingent of 35 swimmers, including Olympian Clarke Burckle. Our little team of seven women placed 7th out of 19 regional teams. We may have been small, but we were mighty!

My goodfriend and fellow USMS Discussion Forums “Forumite,” Debbie Duane, known as “Debaru” on the forums.

In one word, the entire experience was AWESOME. Mission Viejo did an outstanding job organizing and running the meet, leaving no detail out. From the poolside steel drum band that welcomed us, to the reading glasses hanging from strings at the results board, they thought of everything to make it a terrific experience. 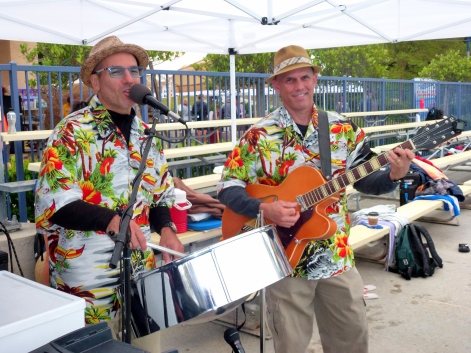 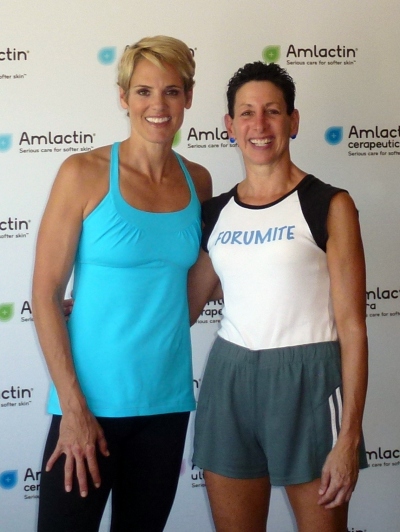 The highlight, though, was seeing my friends (especially my Forumite friends, like Deb, from the U.S. Masters Swimming Discussion Forums) and making new ones. U.S. Masters Swimmers are a great bunch of people; from the youngest at 18 to the oldest at 95 (Rita rocked the pool with her beautiful freestyle and backstroke!), they were all there doing what they loved. And, by the looks of the smiling faces around the pool, they were all having a blast doing it!

Chief Official (and teammate), Ed Saltzman pulled me aside after racing the 200 Butterfly.  “Did I DQ (disqualify)?”  My heart sank as I waited for his reply.  “No, but I’m just curious why you stayed underwater so long after the start before you surfaced to start your stroke.”  Your kick was weak, and you almost came to a complete stop when you surfaced!”  I am not a procrastinator, but the last thing I wanted to do with a dislocated rib was swim full butterfly.  It was “Ouch!” on every stroke!

Donna and I tried to sneak up on Ed as he was officiating a race, but he caught on…

“That Guy,” Doug Jelen, is one of my favorite Forumites.  He’s a hoot!  But, until this moment, I had never met him in person.  He caught up with me immediately after my 100 meter breaststroke race as I was bent over with an aching side from my injured rib.  When he greeted me by name, I looked up with a “Who the heck are you?” look.  I hadn’t a clue, because I expected That Guy to be bald (as he appeared in a race video he had posted.)  My first words to him when I learned his identity were, “You have hair!”  Lifting his cap, and rubbing his head probably wasn’t something he expected…

I absolutely LOVE the logo that was designed for these Nationals!  Having lived most of my life in San Diego and being a So. Cal. Native; surfboards, palm trees, and water are what it’s all about!