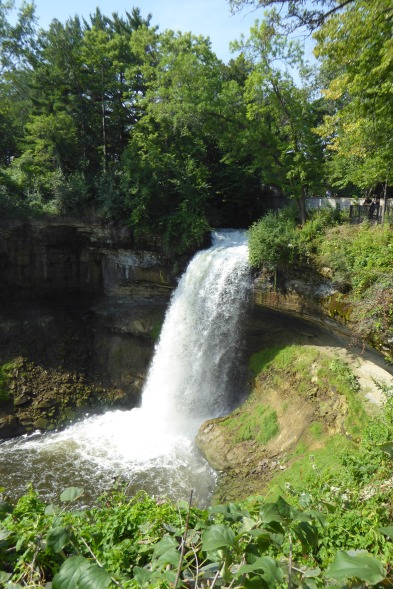 According to the results of my Google search, Minnehaha is a fictional Native American woman documented in Henry Wadsworth Longfellow’s 1855 epic poem, “The Song of Hiawatha”. She is the lover of the titular protagonist Hiawatha and comes to a tragic end. The name, often said to mean “laughing water”, literally translates to “waterfall” or “rapid water” in Dakota.

The name does make you chuckle, don’t ya think?

Minnehaha Regional Park, where the 53-foot falls are the star attraction, is one of the most popular sites in Minneapolis and was highest on our list to visit.  Walking/hiking and travel photography are our “thing”, and there were plenty of opportunities for both.  Besides, the park is also home of Sea Salt Eatery, a popular casual seafood restaurant reputed (on Trip Advisor) to have tasty fish tacos.  The great outdoors and delicious food; what a perfect combo!

The Metro Transit train stop was just across the street from the park, and the falls were located a short walk through lovely gardens, once we entered the park. 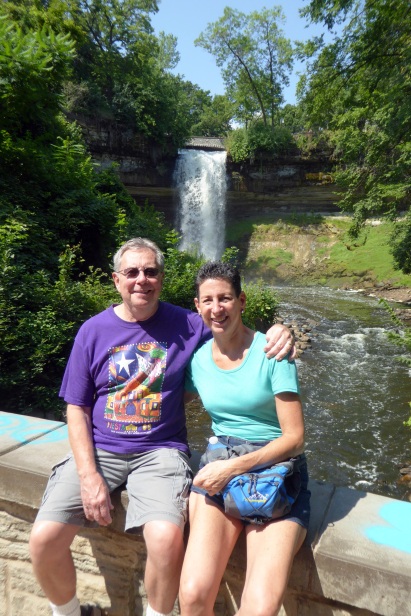 The fish tacos?  As tasty as the reviews stated, and dining alfresco was a lovely way to enjoy our brunch along with the hypnotic sound of the rushing water over the falls. 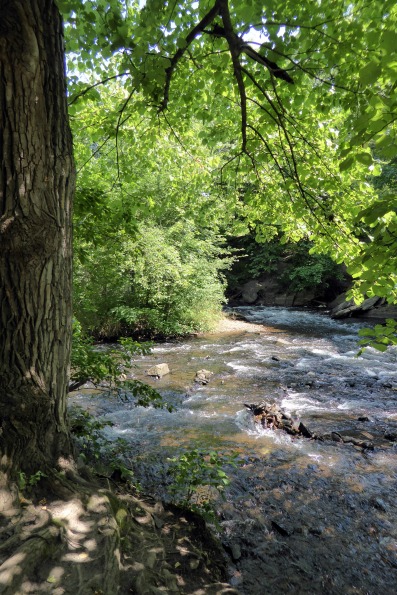 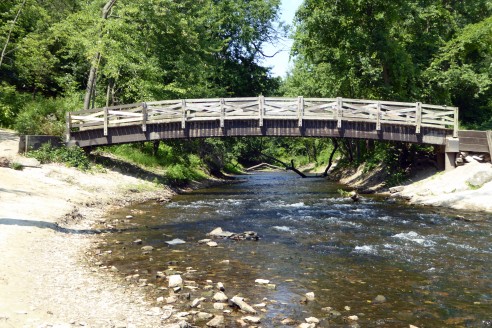 Fueled up, we were ready to rumble, and hike along Minnehaha Creek (which flows over the Minnehaha Falls) to see where it met the Mississippi River.  The scenery along the creek was beautiful, and it was interesting to see the confluence—the perfect fishing spot for this fly fisherman:

Taking a different path back and going the (unintended) long way back to the station gave us the opportunity to see more of this 167-acre park.

The remainder of the afternoon was spent walking the city and checking out two sports stadiums—homes of the Minnesota Vikings and Minnesota Twins—both located in downtown Minneapolis.  The glass building of the football stadium made for some fun photography!

“The times they are a changing.” This is Bob Dylan, then and now. 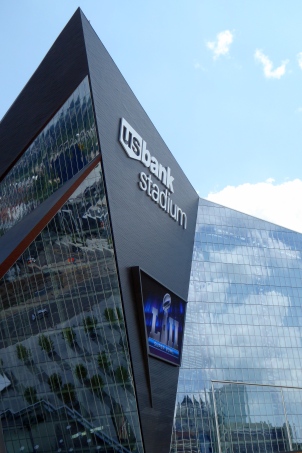 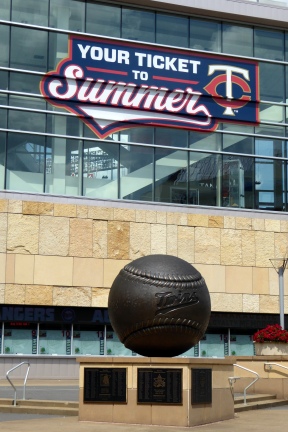 The following day was a cold and rainy one, so we planned everything just right for our Minneapolis visit!  The first day was spent all outdoors, and our second one indoors.  We took the train out to the University of Minnesota to see my friends compete at U.S. Masters Swimming Nationals.  The weather at Minnehaha Falls couldn’t have been better, so we didn’t mind having a rainy day where we had planned on spending it indoors, anyway.

It was great seeing a few of my teammates, but I was most excited to see our friends from Oregon, Allen and Carol.  “King Frog” (as I have called him since he broke the 200 Meter Breaststroke World Record in his age group) has been my breaststroke mentor on the U.S. Masters Swimming Discussion Forums, since I joined USMS in 2010.  We (and our spouses) became friends and look forward to seeing each other at national competitions.  (We even met up at the FINA World Masters Swimming Championships in Montreal, in 2014!  King Frog broke a World Record then, too.)

After lunch with King Frog and Carol, we took the train out to Mall of America.  Shopping wasn’t the draw (we don’t particularly enjoy it); however, the spectacle of it all was what we were curious to see.

The mall completely surrounds an amusement park, and I managed to find plenty of photo ops. at the rides and throughout the mall.  The massive Lego sculptures were especially must-photograph features, as was the irresistible Crayola Crayon store where the colors on display were so cheerful. 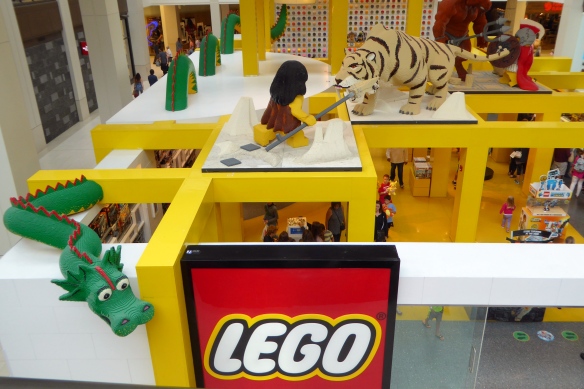 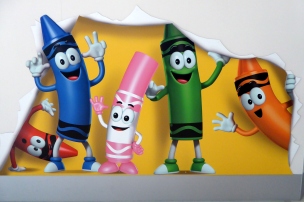 Coming up next:  HITTIN’ THE ROAD TO WISCONSIN

“Minn” in the Dakota language means “water”, and there’s plenty of it in Minnesota—more than 10,000 lakes!

How did we end up in Minnesota, anyway?  It all started from two separate paths that met up perfectly in Minneapolis.  U.S. Masters Swimming Summer Nationals was scheduled for early August, 2017, and it’s a state we had never been to during our travels.  I had also missed the National Senior Games when it was held previously at the very same pool, so I thought it would be a great opportunity.

Meanwhile, I had been telling Bruce over the past four years how great the American Steamboat Company’s “American Queen” was when I took my mom on a paddle wheel cruise down the Mississippi, from Memphis to New Orleans.  It was an experience I thought he would like very much.

One day last year, Bruce greeted me at the door holding the new American Queen Steamboat Company brochure, exclaiming, “I found a cruise for us!”  I figured he had finally decided he wanted to try one of their one-week cruises from Memphis.  Instead, he picked out their 23-day re-positioning river cruise that paddles down the Mississippi from Red Wing, Minnesota to New Orleans!

It just so happened that cruise was scheduled for one week after Nationals, and he had a plan.  (I sometimes wonder what’s rolling around in his head when he takes breaks from his glass work, kicks back on the bed, and stares at the ceiling…)  “How about if you swim at Nationals, and then we’ll rent a car and do a road trip around northern Wisconsin?  We can return the car back in Minneapolis, and then we’ll take the cruise?” he asked.

Adding up the days, this plan amounted to five weeks of travel—piece of cake for me, but not so much for Bruce.  “Are you sure you want to be away for THAT long?” I asked.  “We did a seven-week road trip two years ago, didn’t we?”  Yeah, good point.  “What about your Etsy business?”  I asked.  “We’ll take it with us!” he replied.

Fifteen minutes later, I was on the phone and the cruise was booked.  (By booking immediately before the early-booking deadline, we saved $3,000 and were able to get one of the lowest-priced cabins that book up quickly.)

Fast forward to May of this year, the swimming part of the plan started to unravel (as you may have read in my July 8 post).  Due to injuries, I didn’t know whether I would be able to compete at Nationals after all.  The entry deadline was prior to my open water swim, and I wouldn’t have time to prepare for my usual competitive events.  (There’s a big difference between swimming the 200 Meter Butterfly or Breaststroke in a Nationals competition and a 1K freestyle fun race in a lake.  Others may argue with me on this point, but I’ll take the 1K as the easier-on-the-body-and-mind event.)

The deadline came, and I knew I wouldn’t be ready to compete at Nationals, so I let it pass.  We decided to go anyway, see (and cheer on) our friends, and stick with our travel plans.

We arrived in Minnesota on August 1 and took their excellent Metro Transit train downtown to our hotel.  The afternoon was spent taking a long walk down to the river and across the bridge for lunch, and then back downtown.

Here are some scenes from our first day in Minneapolis: 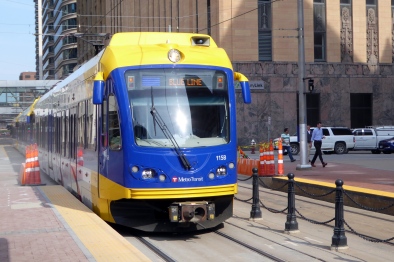 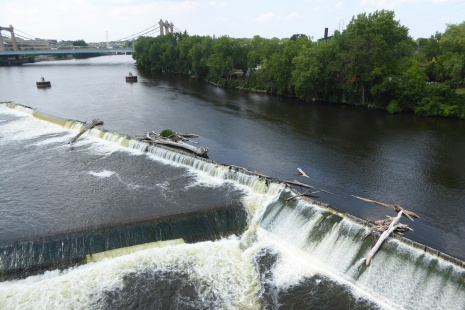 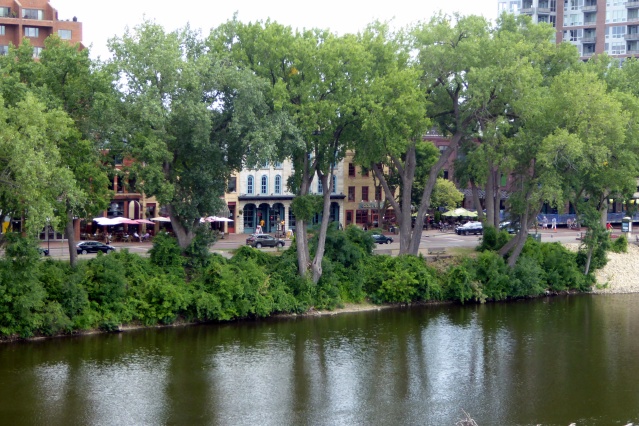 Across the bridge from downtown Minneapolis 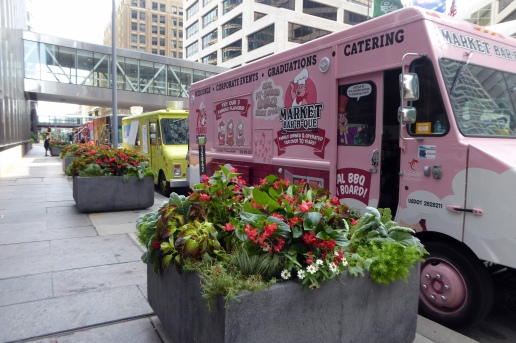 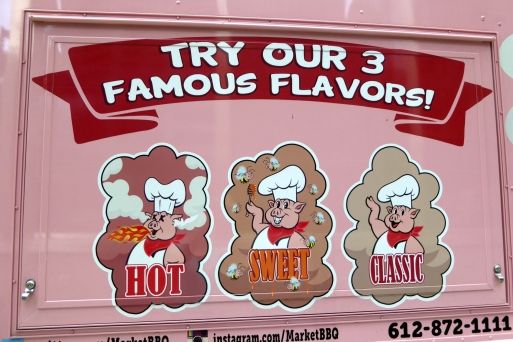 Next up:  The M’s have it!  Minnehaha (Ha-ha!) Falls, Minneapolis, and Mall of America

Where has the time gone? So much has happened since visiting Montreal and competing in the FINA Masters Swimming World Championships in early August! After World’s, we visited Quebec City for a few days of sightseeing and then flew back to the States to compete in the U.S. Masters Swimming National Championships. Next, it was time to gear back up to compete in the Southside Seals Pentathlon on September 13 where I competed in my first Ironman. Nothing like racing a 400 Individual Medley, 200 Freestyle, 200 Breaststroke, 200 Backstroke, and 200 Butterfly (saving the hardest for last) in just over two hours! Then, on September 19, I raced a full slate in the Georgia Senior Golden Olympics so I could qualify for Nationals that will take place in the Twin Cities in July 2015. My race times were slow; however, competition was light, so I ended up with two gold and three silver medals. 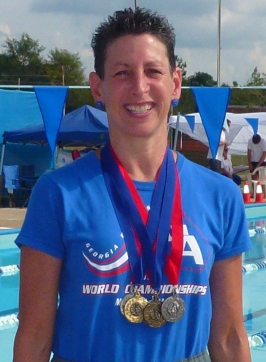 Our travels are still on my mind as wonderful memories, though, so I thought I would share some of them with you.

Back in Montreal, Day 2 of competition at World’s didn’t include any of my race events, so it was a day off for me. Most swimmers would choose to relax and stay off their feet given that opportunity; however, we wanted to see Montreal and it was important to me to make this an enjoyable trip for Bruce as well.

Our day off from the pool started with a Metro ride to the Marche Jean-Talon, a wonderful market that was so much more than just produce stalls. It was an experience. 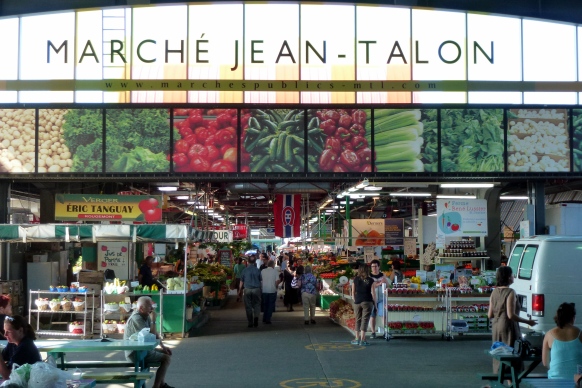 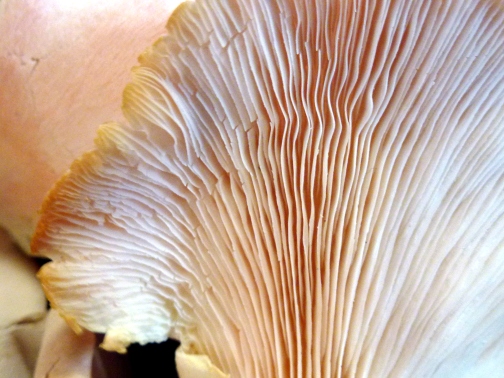 Most of the remainder of the day was spent exploring the streets of Old Montreal where it felt like being back in France. From the architecture dating back to the 1600’s to the horse-drawn carriages, it was hard to believe we were still in North America. The gas lamps, flower baskets, sidewalk cafes and French-speaking locals gave Old Montreal even more of a French feel to transport me back in my mind to France.

Riding the Metro trains around Montreal was an efficient way to see the city, and swimmers were given a free 9-day pass to see the sights. Family members were sold passes at an excellent discount, so Bruce and I took advantage of it throughout our nine-day visit. The condo we rented through http://www.homeaway.com was located downtown just a couple of blocks from a Metro station, so it was very convenient. Since the Parc Jean-Drapeau Aquatic Complex was located at one of the Metro stops, we used Metro for getting to and from the pool each day of competition.

Everywhere we went around the city, we saw other swimmers and their families wearing their World Championships credentials around their necks. It was to be
expected given the 9,000 athletes in town for the five Masters aquatic events, including swimming, open water swimming, synchronized swimming, diving, and water polo.

What I didn’t expect, though, was to run into my own teammate on a crowded train during our day away from the pool sightseeing! On our way back to the condo, we were just about to board a train when I noticed that some of the cars were more packed than others. We made a quick decision to run up ahead to board a less-crowded train, and there was Ed Saltzman, Georgia Masters team relay coordinator, standing at the car door with a grin on his face. Ed had all of the team’s t-shirts with him, so he quickly dug through his backpack trying to locate mine. Wait! “What station are you getting off at, Ed?” When we realized we were hopping off at the same one, we breathed a sigh of relief and took care of business in the station instead. What a fun way to end our first day of sightseeing in Montreal! 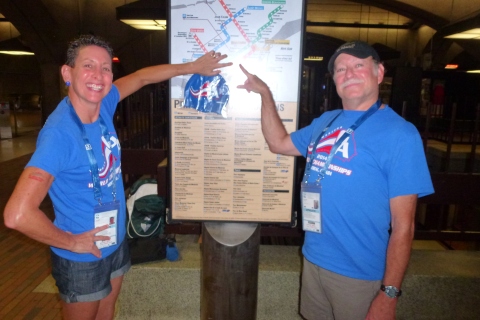 The view from our condo in downtown Montreal.