Do you remember that really cheesy, sappy TV show, “Flipper” with the even cheesier theme song?  When I was a little kid, Flipper was my favorite show; must-see TV for me.  I was so envious of Sandy; I wanted my very own pet dolphin, too!  I was so crazy about dolphins, my dream was to grow up and become a dolphin trainer at Marineland (no longer in existence) or Sea World.

Well, fast forward to 2012 and now I am a baby geezer, remembering that childhood dream.  Flipper was from Florida and now I was on a mission to see his distant cousins here, too.  Sure, I have seen plenty of dolphins in my 50 years, but “plenty” is never enough, when it comes to seeing your very favorite of anything.

But, I’m getting ahead of myself, as far as yesterday’s adventures go.  The day started out back at J.N. Ding Darling Wildlife Refuge; this time with our kayaks, rather than a tram tour.  There are two places to launch within the reserve and we opted for the second, after passing the white pelicans. 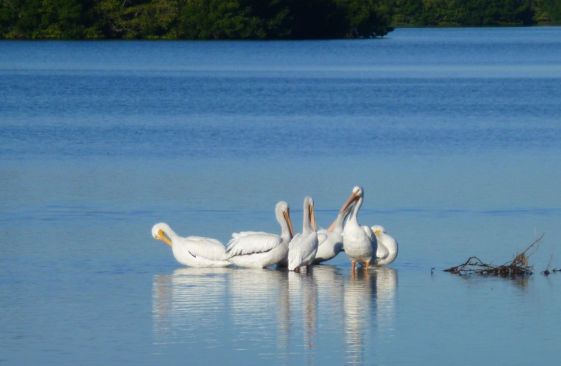 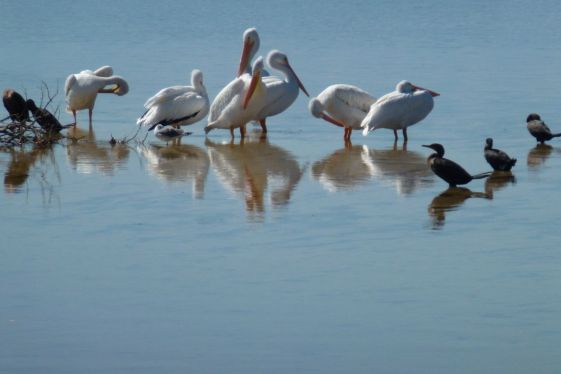 Bruce brought his fishing gear, intending to catch this time, rather than just fish.  But, it just wasn’t meant to be.  It’s not that he’s a bad fisherman; I used to watch him catch 6-10 bass in one hour off Coronado Bay, from his kayak.  And, that’s no fish story; it was a regular thing!  But, here, the fish just aren’t going to bite at much of anything when they are suffering from a sudden 10 degree temperature drop.

So, while Bruce fished, I chased around a blue heron and watched the egrets on the shoreline.  It was a gorgeous day and so quiet and tranquil.

After fishing, a swim workout, and a deli sandwich from Jerry’s, we headed for the Lighthouse in our kayaks in search of dolphins.  They were there the other day, so we figured our luck would be with us again.  Sure enough, before we even launched our kayaks, we spotted them, just 50 yards out.  FLIPPER!

The gulf was completely flat and winds were only 4mph; perfect for ‘yaking.  We paddled towards the pier and spent the remainder of the late afternoon paddling around a couple of pods of dolphins out for their evening meal.  A mother and baby, close by her side, didn’t seem to mind us at all; a surprise, since mothers are always so protective of their young.  At one point, Mom poked her head up by Bruce’s kayak to have a look, before swimming right under his boat.  He must have met her approval (how could she not???), because they continued to hang around the area. 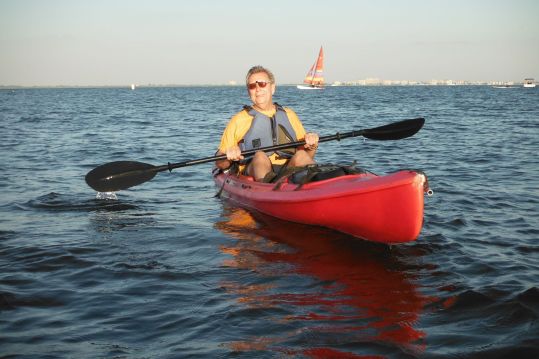 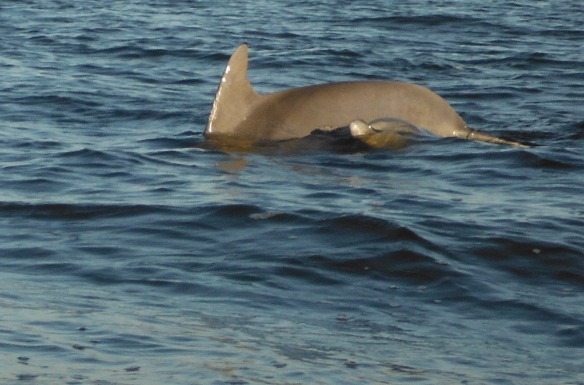 A few times, the dolphins surfaced right by my boat, as well, before taking a dive right under me.  (Of course, every time, I was too slow at the trigger and ended up with plenty of photos of just a fin sticking out of the water…)  It was such a thrill, reminding me of the times I had paddled with the dolphins before; once in Long Beach and the other in Aransas Pass, Texas.

The main thing was that it was such a blast to be out there with the dolphins, so close to the shore, watching them feed.  At times, they would dart towards the shore chasing down their dinner; their speed and agility amazing to see.  We were having so much fun; we didn’t want to turn back when the sun was almost set.  For that hour or two, I was living that childhood dream.  “They called him Flipper,  Flipper, Flipper, …”

We didn’t know Sanibel Island even existed until our friends, Becky and Paul told us about their vacations to Captiva Island, Florida, located just past Sanibel Island.  They couldn’t say enough great things about it though, which explains their once or twice per year annual visits.  So, we were convinced we just had to see it for ourselves.

Sanibel Island measures roughly 12 miles long and five miles across at its widest point.  Captiva Island is smaller at less than 5 miles long and a 1/2-mile wide.  Both are accessible from Fort Myers by the Sanibel Causeway Bridge.  At a bridge toll of $6 and steep beach parking fees, they are not frequented by Floridians as often as other destinations- just the way the locals like it.  So, it is not as touristy here like, say, Daytona Beach or Orlando.  Rather, the vibe is low key and relaxing.  This is where we are staying:  www.seahorsecottages.com ; a very low key place in a great location near the beach.

There are so many reasons to visit Sanibel Island; especially if you are a beachcomber.  Sanibel Island ranks number one on the continent for shelling and we could see why!  We literally saw piles of shells as we walked along the beach at sunset, on the evening of our arrival.  Due to its east-west torque of Sanibel’s south end, it acts as a ladle, scooping up all the shells that the Gulf imports from the Caribbean and other southern seas.  The abundance and variety of shells draws serious shellers from all over the world.

Birders are also drawn to Sanibel, because of the abundance and variety of gorgeous birds that wade in marshes and cruise the shorelines.  In our first day alone, we saw everything from two varieties of each of pelicans, herons, and egrets, to ospreys and the bright pink Roseate Spoonbill.  And, on the beach, there were dozens of willets, plovers and sandpipers. 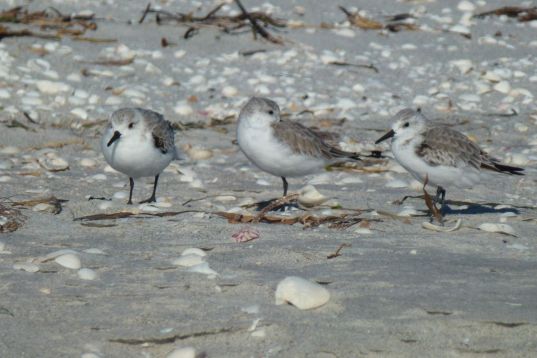 Even if you ignore the shells and birds, the beaches here are gorgeous!  And, that’s before I even get into what is beyond the shore.  Last evening, we saw our first bottlenosed dolphins frolicking about just 50 yards out.  From what we hear, there will be plenty more of them to see.  But, we really hope to see manatees, too, known to frequent this area.

There is also the 6,400 acres of J.N. “Ding” Darling National Wildlife Refuge, the natural showpiece of Sanibel Island.  After my swim at the Sanibel Recreation Center (a wonderful facility!), we visited the refuge today.  We took a guided tram ride and thoroughly enjoyed the beauty of the area and the wildlife we saw, including a variety of birds and even an alligator catching some rays in the shallow water right near the road. 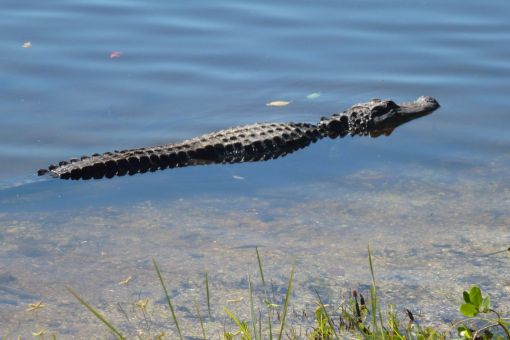 Tomorrow, we will get our kayaks out on the water, so Bruce can fish for Redfish, Speckled Trout, Tripletail, Snapper, Cobia, and/or Snook.  He plans to mostly catch and release, but I’ll try to snap a photo or two first.

Our first impression of Sanibel?  We’re hooked (no pun intended)!