“Be careful in Chicago; there is so much crime!”  “Don’t go out at night in Chicago, even in the tourist areas!”  These were the warnings I received from a couple of acquaintances who used to live in Chicago.  I had heard it all before.  Chicago’s crime was all over the news, and it had gotten much worse since I visited the city with my best friend, in 2012.  Those warnings, however, weren’t going to stop me and Bruce from seeing U.S.A.’s third largest city together, and this was the perfect opportunity—at the end of our cruise, before flying home.

During our three days in downtown, we took the necessary common-sense precautions, walked all over downtown, and thoroughly enjoyed it!

For a good overview to begin our stay, we used our on-board credit and took a city tour that was offered through American Queen Voyages, the company we had cruised the Great Lakes with during the previous two weeks.  On our final day, we did an architecture river cruise to learn about the skyscrapers that lined the Chicago River.  Both tours were excellent!

What most impressed us about Chicago was how clean and beautiful the downtown city center was everywhere we walked.  The city is situated along Lake Michigan, and the city planners did a fabulous job lining the waterfront with attractive parks that offered great vantage points of the amazing skyline.

There is so much I could write about Chicago, but I will let my pictures tell the story instead. (To view them larger, click on the photos.)  Here, then is Part 1:

It was fun watching the faces change on Crown Fountain, and then “spit” water every ten minutes. The kids loved it! What a great way to cool off during the hot, humid summers.

We stayed on the 14th floor at the Warwick Allerton Hotel, on North Michigan Avenue. This (right) was our (zoomed in) view of Michigan Avenue from our room, including this gorgeous bird! Yes, it was real! I was able to photograph it by sticking my camera out the window that opened up just enough to fit my hand and camera through. Our room was on a corner, so it required a bit of maneuvering and guess work to angle my camera, hold it steady, and snap these shots!

The largest Starbucks in the world was located a block away. People actually line up around the corner to get in! We don’t drink coffee, and we aren’t Starbucks fans, but we thought it was worth a look inside when we happened to walk by when there was no line.

The planters along Michigan Avenue and neighboring streets were fabulous! They added such a beautiful element to soften the appearance of all the steel and concrete of the city.

Some of the buildings featured interesting artwork on their exteriors:

Although we thoroughly enjoyed our vegetarian deep dish pizza at Lou Malnati’s during our pre-cruise Chicago visit, we decided to try Giordano’s stuffed vegetarian deep dish pizza for comparison (see below). Lou Malnati’s crust wins the contest; however, Giordano’s wins for everything else! We loved their sauce and stuffed pizza! Want to make your mouth water? Click on the pizza photo to see it larger!

Now, for dessert. Kind Snacks is on their “Frozen Summer Tour,” and we were lucky enough to see them– twice! First, we saw the truck at the park at the foot of Navy Pier, and they were handing out free samples of their DELICIOUS frozen bars. They were eager to give you as many as you wanted, so we went back for seconds. 😀 The next day, they were on Michigan Avenue near the Chicago River! They would have given us an entire box if we wanted! The sample lady was eager to empty their coolers and call it a day. We ended up tasting one each of three different flavors and made pigs of ourselves. Damn, those things are good!

Next up: Cruising the Great Lakes #12: Captivating Chicago, Part 2

After disembarking the architectural tour boat, I couldn’t wait to get over to Millennium Park to see Cloud Gate; affectionately known as “The Bean”.  The stroll through downtown was lovely, but my heart skipped a beat when I saw a thick stand of trees, just up ahead.  We were almost there and I couldn’t wait to get my camera out and start clicking away…

Cloud Gate, a huge bean-shaped stainless steel sculpture, designed by Anish Kapoor, was constructed between 2004 and 2006.  It is the centerpiece of Millennium Park; Chicago’s largest rooftop garden that takes up 24 acres of Grant Park.  Millennium Park is a 24-acre rooftop garden, you ask?  Well, yes, because it sits atop a parking garage and the commuter rail.  What an amazing use of public space!  And, it has become Chicago’s second-most favored attraction, after Navy Pier. 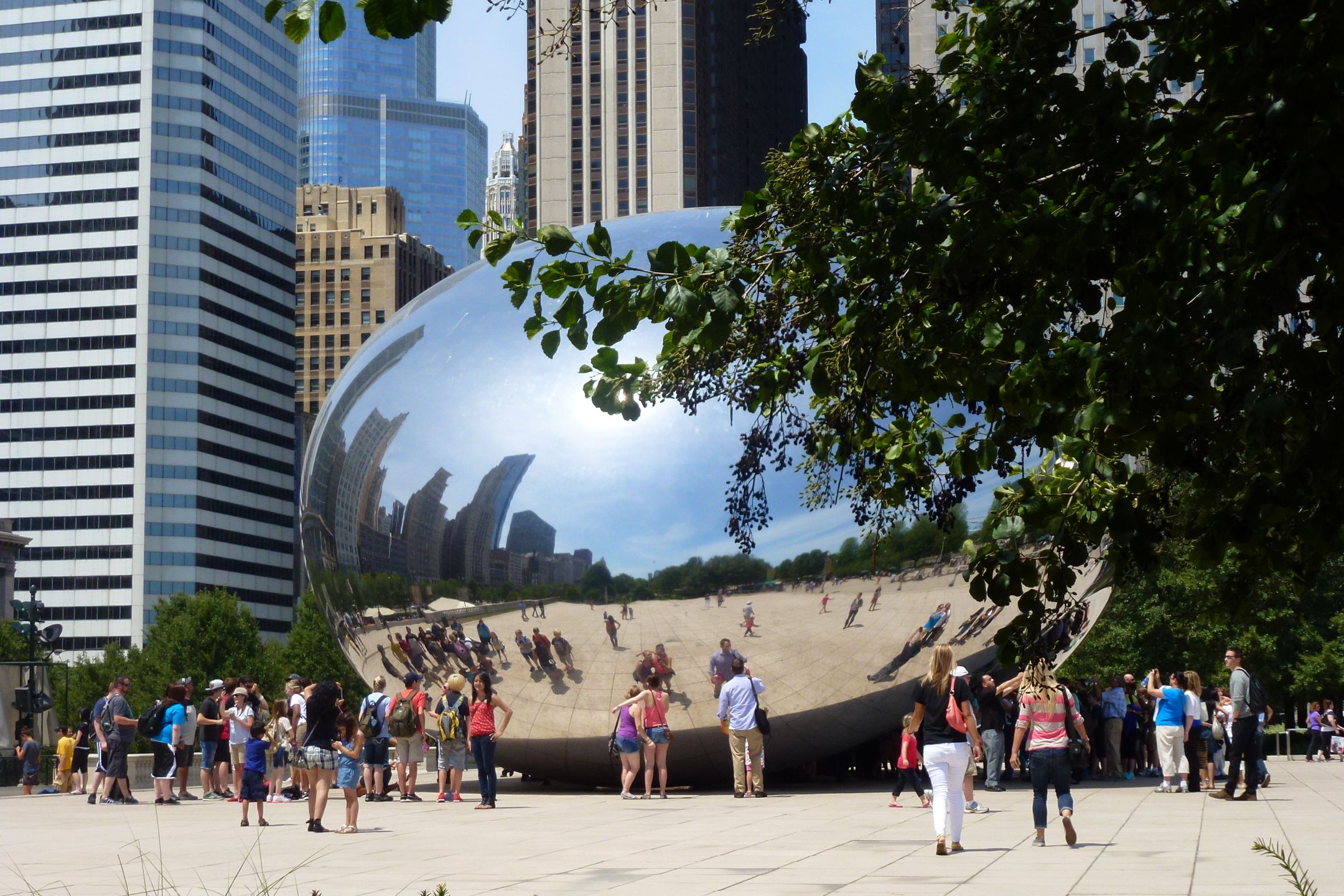 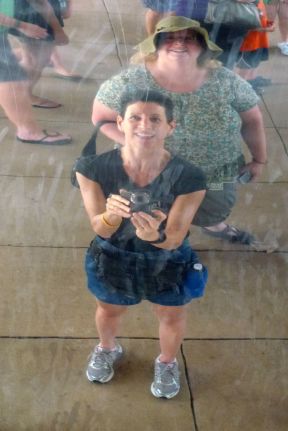 I could have easily stayed at The Bean all afternoon and into the evening, thinking of various other ways to photograph that magnificent sculpture.  I could only imagine what fun it would have been capturing the city lights, at night!  But, I tore myself away, so Laura could show me the park’s fountain.  WOW!  How cool is this?

Crown Fountain is a video sculpture named in honor of Chicago’s Crown family and designed by Jaume Plensa.  The fountain is composed of a black granite reflecting pool placed between two transparent glass brick towers that use light-emitting diodes behind the bricks to display digital videos.

Other highlights of the park include Jay Pritzker Pavilion, the most amazing band shell I have ever seen: 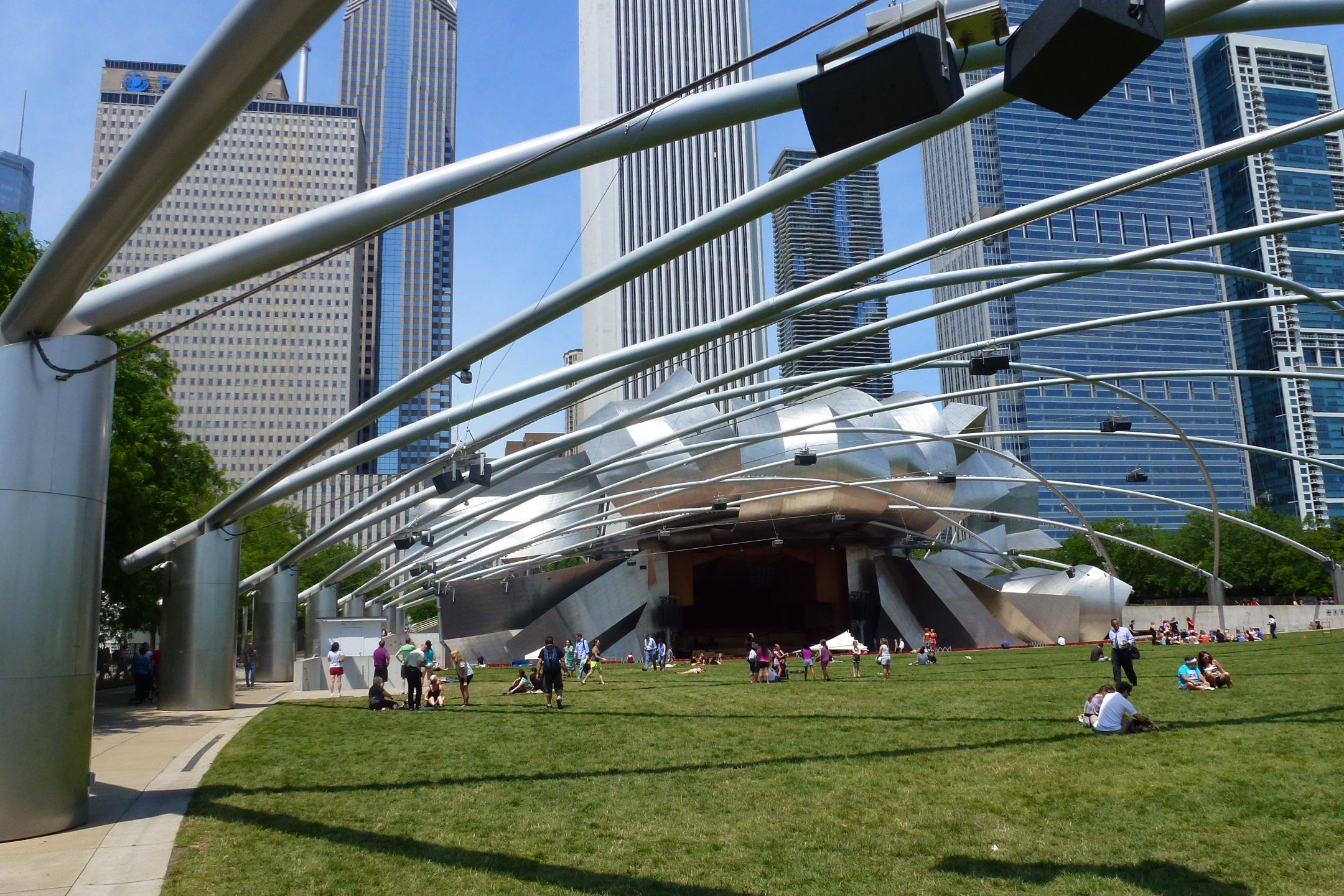 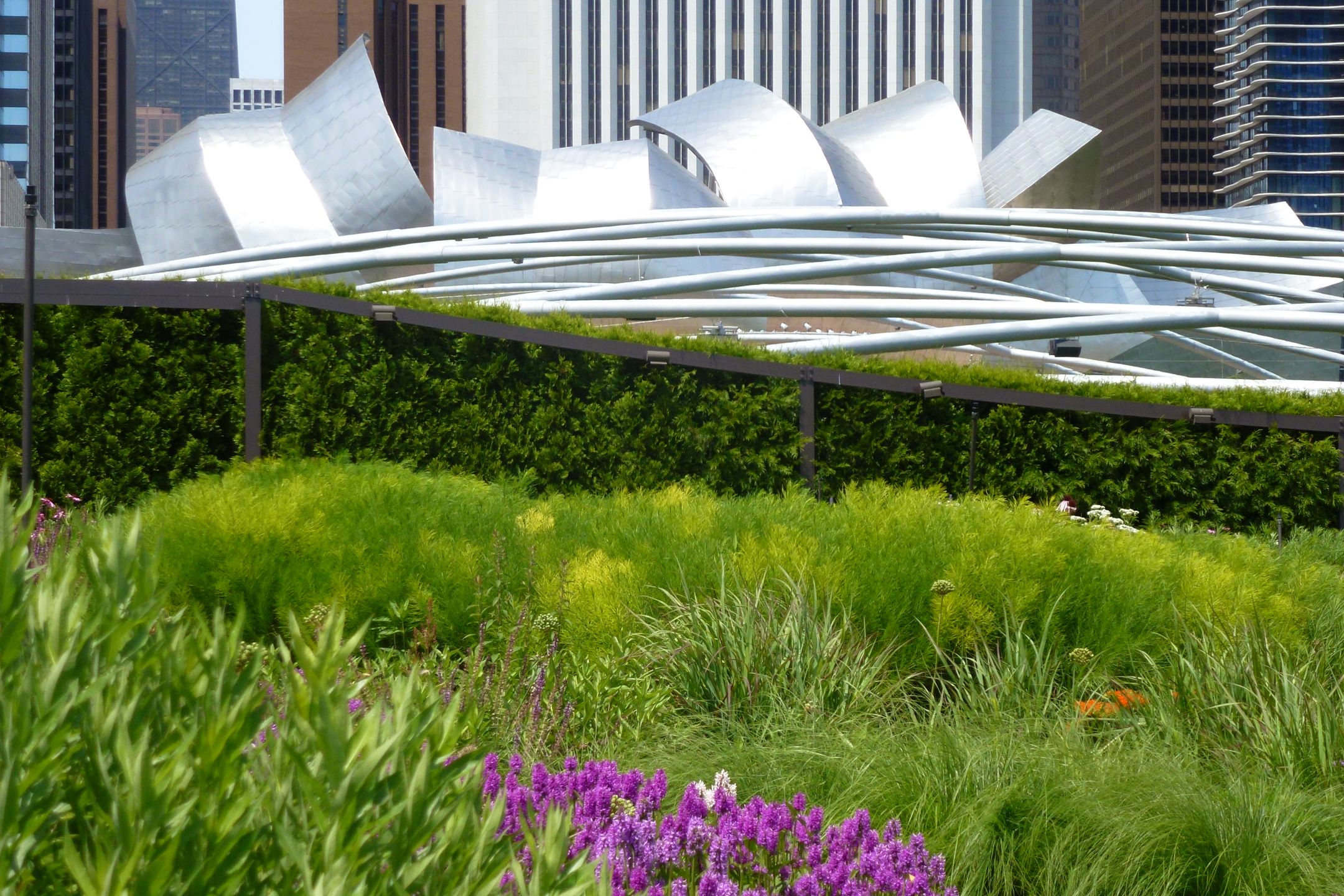 Lurie Garden was a lovely addition to Millennium Park.  The 2.5-acre public garden is a combination of perennials, bulbs, grasses, shrubs and trees.  It is the featured natural component of the world’s largest green roof. 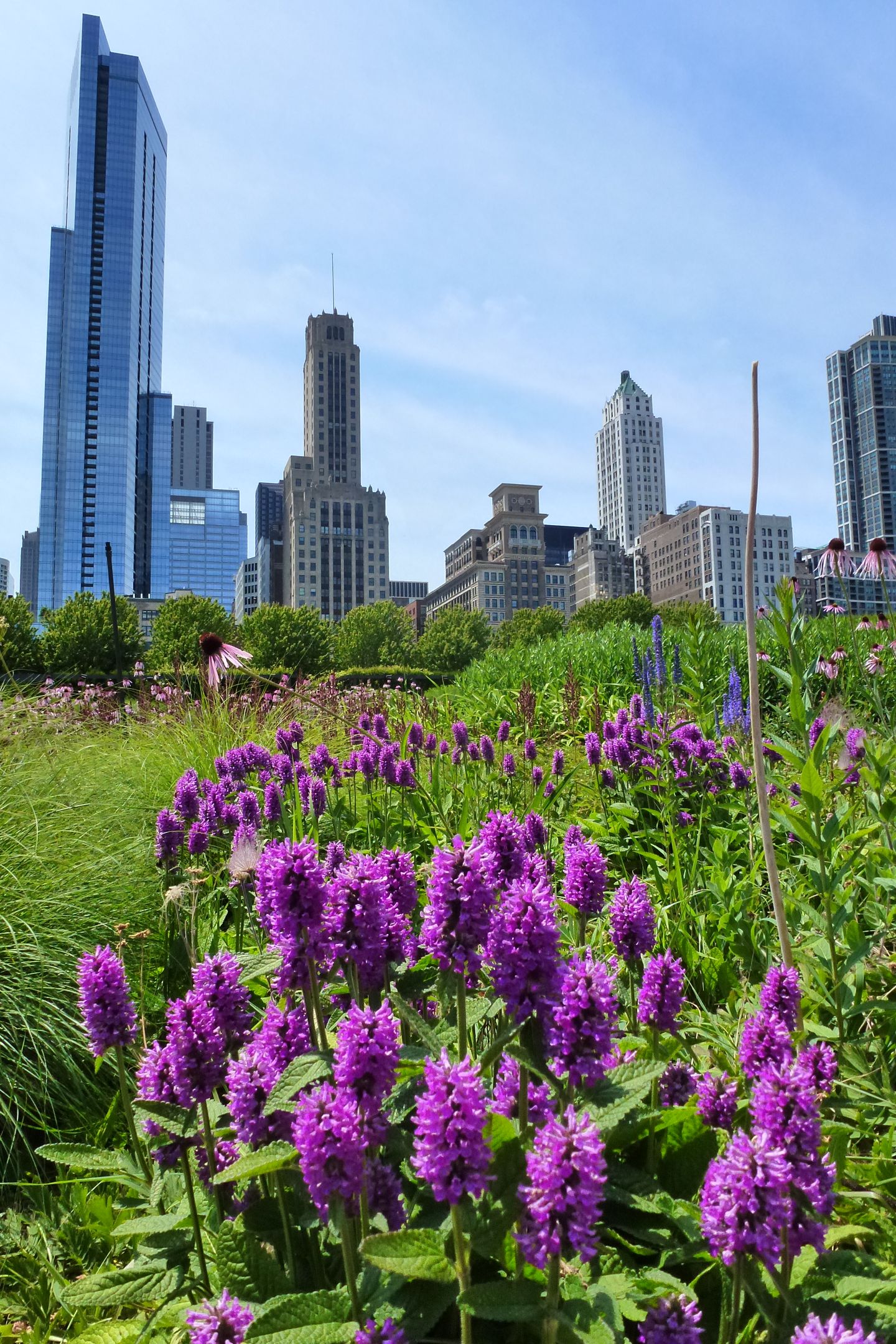 After strolling through the garden, we ended our day at The Art Institute.  Stop by shortly for highlights of the exhibits we enjoyed , before wrapping up the evening with dinner at Frontera Grill!

Before I travel, I do a lot of research on my destination; because it is something I really enjoy doing as part of the entire travel experience.  But, this time, I chose a different approach, because I was traveling with Laura.  She had been to Chicago before and had ideas in mind about what she wanted to see, this time around.  I was excited about going along for the ride!  And, we were meeting up in Chicago more to celebrate her upcoming 50th birthday, rather than mine, which had already been celebrated in California.  So, aside from finding our accommodations on Trip Advisor, I had only glanced a time or two at Chicago’s tourism website and quickly checked out “Things To Do” in Chicago, on Trip Advisor.

There were only a few things I knew I really wanted to do in Chicago; my must-see, must-do list.  Otherwise, I figured I would enjoy anything Laura would want to see and do; after all, she has been my best friend for 42 years!  So, what topped my list?  First of all, “Cloud Gate”, the huge sculpture in Millennium Park affectionately known as “The Bean”, because of its bean-like shape.  I knew it would be a hoot to photograph, so I had my heart set on it.  Meanwhile, I had my stomach set on sinking my teeth into a Chicago-style deep dish pizza.  In my mind, when in Rome, do as the Romans do.  In Chicago, it’s deep dish pizza!  And, speaking of food, which Laura and I do frequently, I wanted to treat Laura to dinner at Rick Bayless’ Frontera Grill, for her birthday ( http://www.rickbayless.com/restaurants/grill.html ).  Finally, I was sure Laura and I would agree on this one:  An architectural boat tour to learn about downtown Chicago’s varied architecture.  (And, if we made it to the Art Institute, it would be a bonus!)

Thanks to Laura scoring a Groupon, we got a great deal on that architectural boat tour that we were both really looking forward to doing.  So, we set out on foot after enjoying our first night and breakfast at our B&B, heading down Michigan Ave. (“Magnificent Mile”) towards the river. 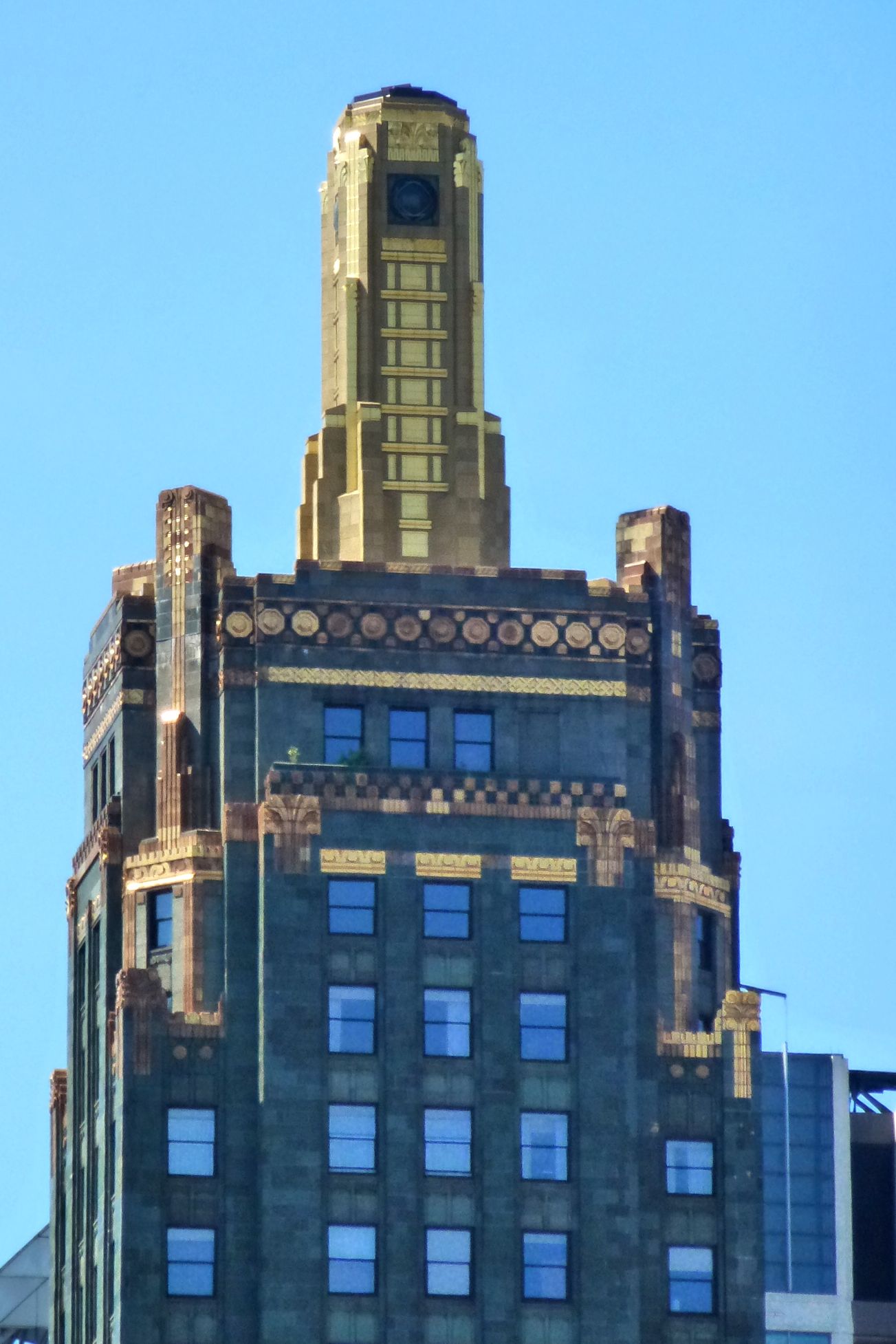 Wow!  What a gorgeous avenue; the most beautiful I have ever seen in a large U.S. city.  Gorgeously planted and maintained mini gardens surrounded each tree, along each side of the street, and there was no litter or graffiti to be found.  Chicagoans sure take pride in their city; at least in that part! (We never ventured out to the south side…)  But, the Magnificent Mile is also one of the wealthiest miles anywhere.  Sak’s, Neiman Marcus, Tiffany’s; the list goes on.  It it’s not there, it doesn’t exist.  Needless to say, my wallet stayed firmly in waist pack as we soldiered on (with blinders).

We arrived at the Wrigley Building early for our boat tour, so it was a perfect opportunity to take a stroll along the river and take in the sites of downtown.  What a fabulous surprise!  There was a point to me explaining my lack of research preparation for this trip, detailed previously; I had no idea Chicago had a river located right in between the skyscrapers of downtown!  Having skipped over any of the photos posted on the tourism website or Trip Advisor, I had no idea what to expect.  And, honestly, what I thought I might expect was something more like Manhattan, in New York City.  I figured downtown to be located on Lake Michigan and our boat tour cruising along the shore, to take in the sites of the skyscrapers.  After all, that is what our N.Y. boat tour was like.  Reasonable, right?  Noooo; it wasn’t like that at all!  A river runs right through downtown Chicago with skyscrapers and cafes lining each side of it.  And, beautiful bridges (all unique) cross the river at each block.  WoooHoooo!  It was love at first site.  And, at the very moment I laid eyes on this scene, I declared Chicago my favorite large city in the U.S.A ; other than San Diego, that is!) 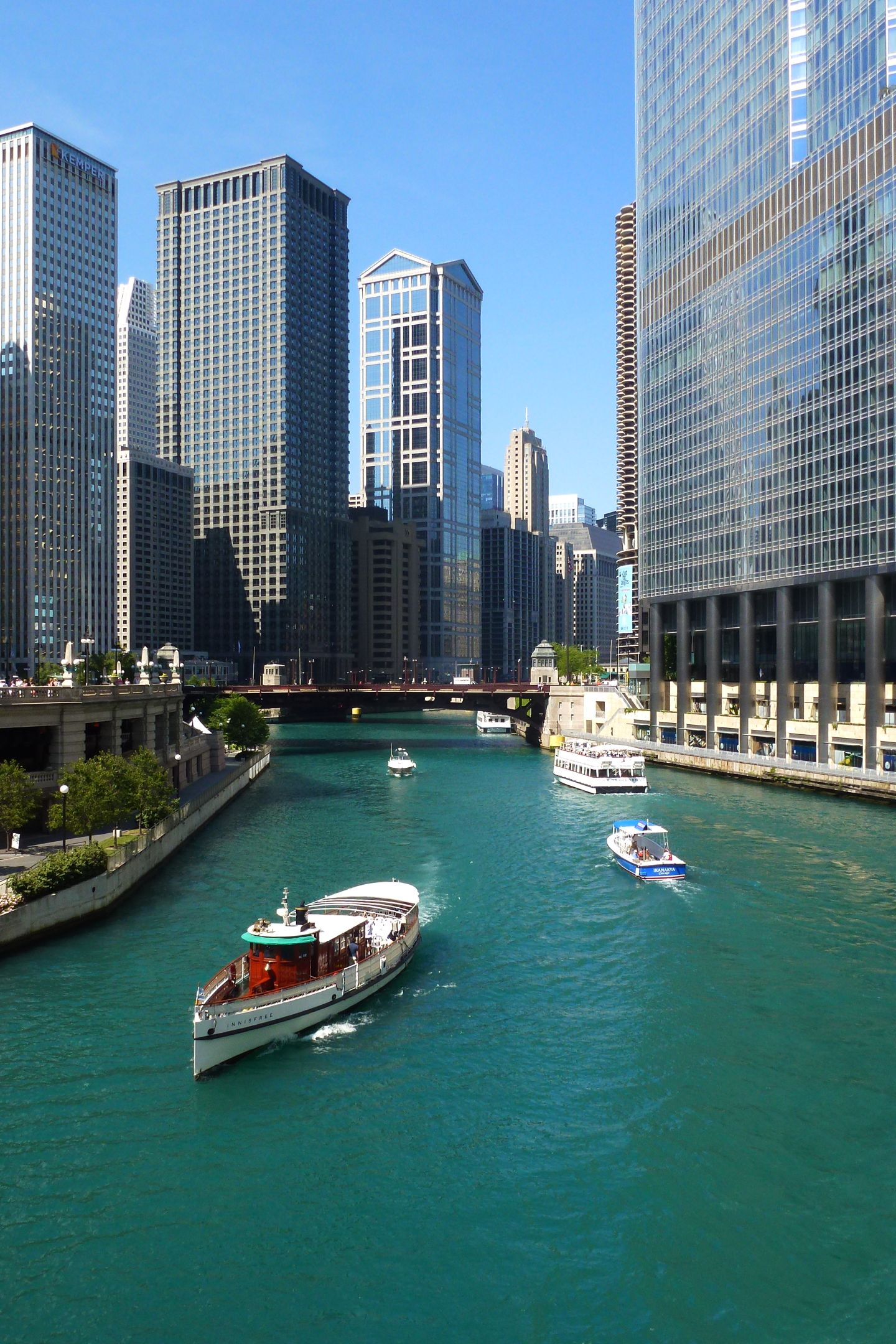 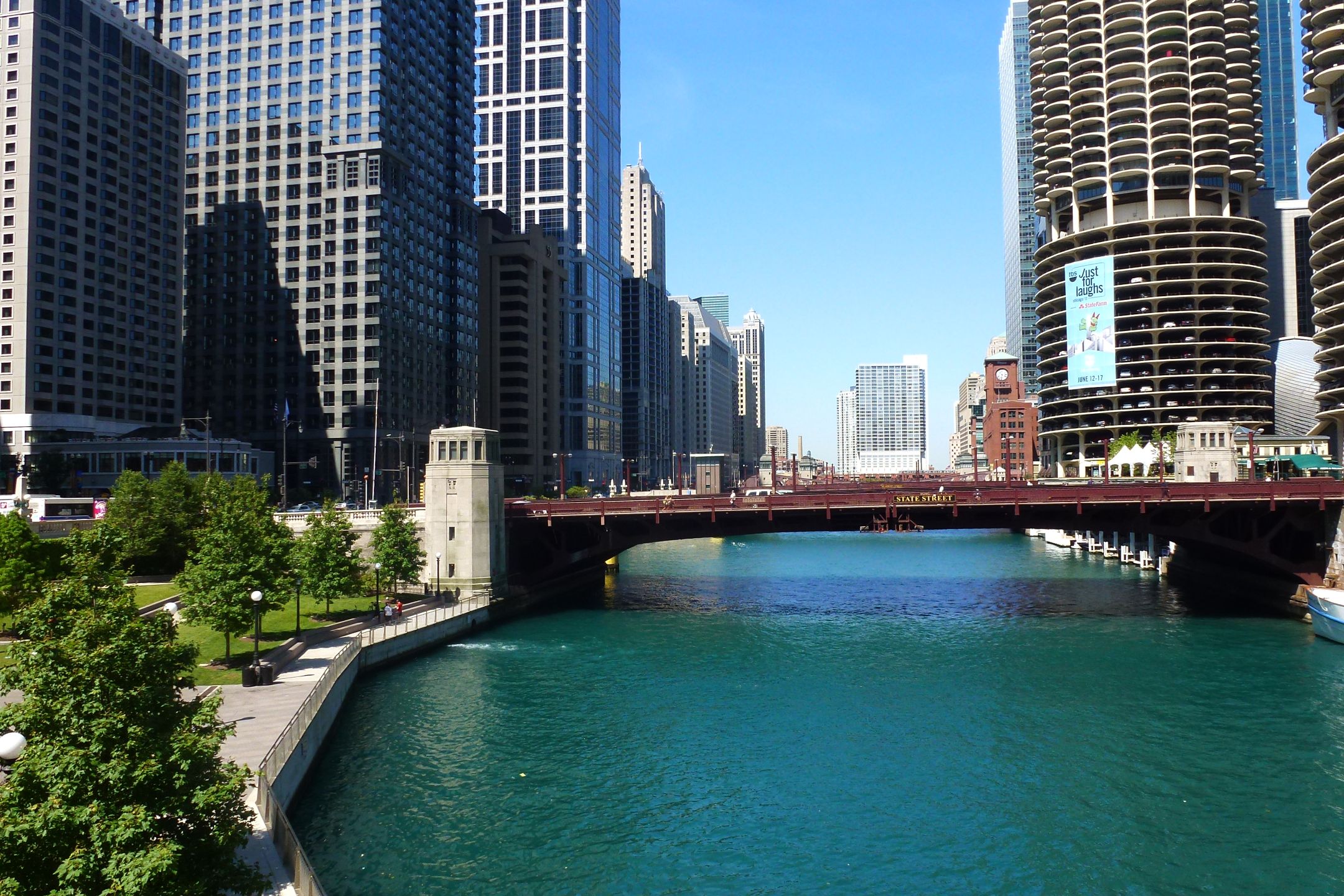 The twin towers above are “Marina City” (aka “Corn Cobs”); a mixed-use residential/ commercial building.  It was designed in 1959 by Bertrand Goldberg; an architect who seemed to have an aversion to right angles.  When it was completed in 1964, they were the tallest reinforced concrete structures in the world. 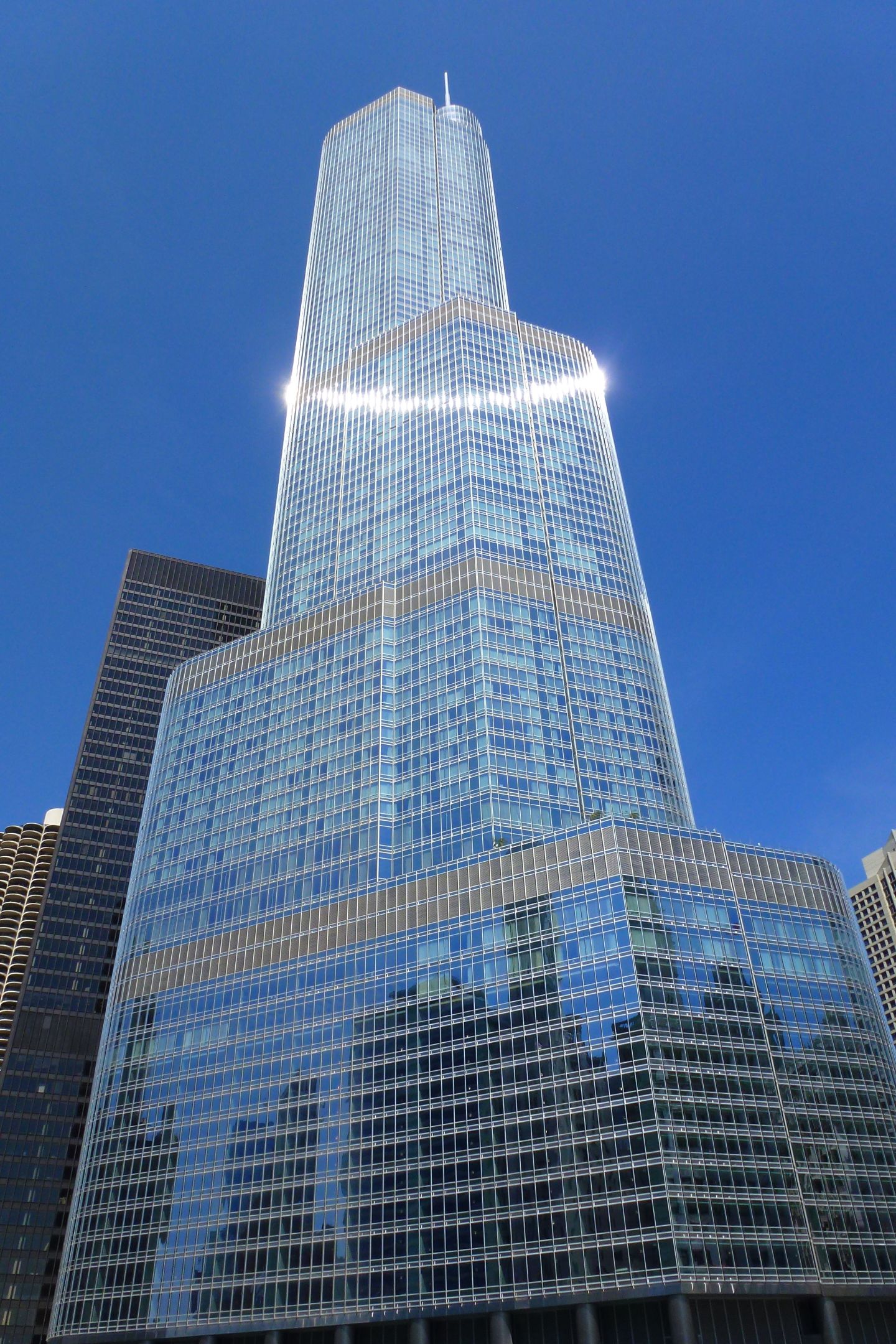 Trump International Hotel and Tower, named after The Donald, is a condo-hotel designed by Adrian Smith.  At 92 stories (1,389 feet), it is one of the tallest buildings in Chicago.

This is why I enjoy modern downtown skylines: 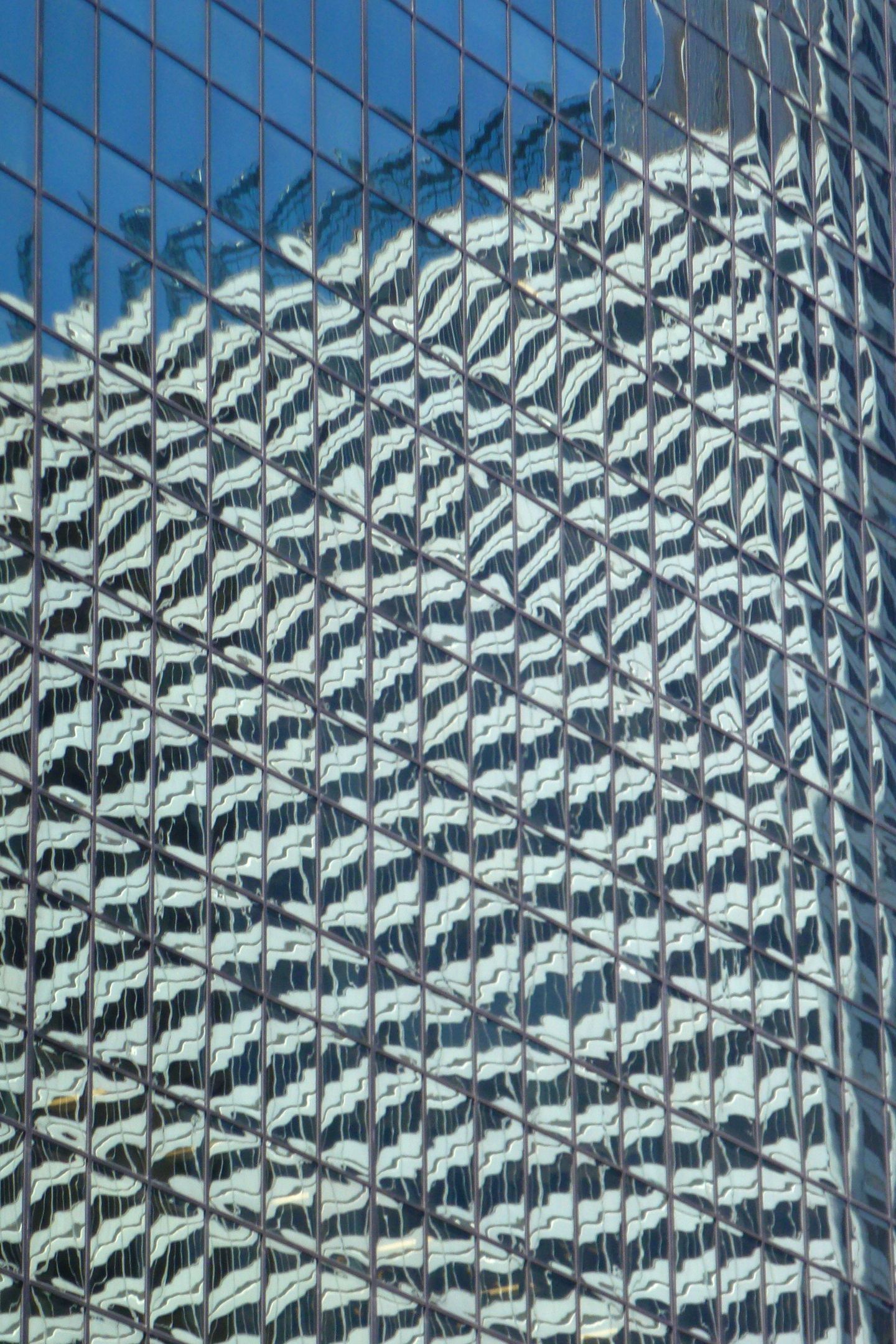 See you next at “The Bean”!