The theme of our cruise was “The Great Riverboat Race,” but the race theme was carried out in a few of the other stops as well.  In Louisville, we toured Churchill Downs (horse racing), and that evening, a group went to the NASCAR races (car racing).  In Maysville (detailed in a future blog post), the American Duchess staff had arranged a 3K run/walk race for the passengers.

Cincinnati was the location for the Great Riverboat Race originally scheduled to be between the American Duchess and Belle of Cincinnati.  As it turned out, however, a third boat entered the race:  American Queen Steamboat Company’s American Queen, the boat Bruce and I cruised on in 2017 for the three-week “Mighty Mississippi” trip.  That wasn’t in the original plan, because the American Queen wasn’t supposed to be in Cincinnati.  Due to the very high water levels on the Mississippi River, however, the ‘Queen had to drastically alter their cruise route.  Not only would they be changing stops, but they also had to divert to an entirely new end destination.  What a mess!  I can only imagine the chaos of having over 400 passengers disappointed and/or angry.  But, what could the ‘Queen do?  Even with the smoke stacks down and the pilot house lowered, the boat couldn’t clear some of the bridges.  Besides, the passenger contract clearly states that the cruise line isn’t responsible for diversions due to situations like this.  Still, the company wanted to keep their passengers happy, so it did all they could to cheer them up.

For one thing, they tied the ‘Queen up alongside the American Duchess for the earlier part of their Cincinnati stay, and then they entered the race, among other perks. 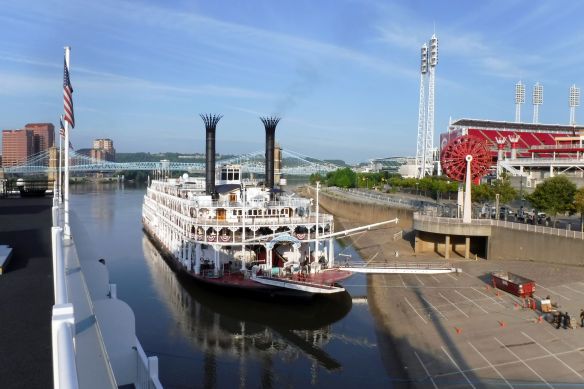 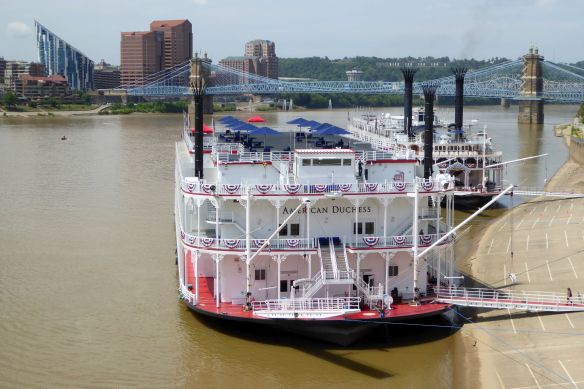 The company’s owner, John Waggoner, and his wife, Claudette, were on the ‘Duchess for the afternoon, so we got some of the scoop while watching the race together on the top deck.  When one of the passengers asked why the ‘Queen’s passengers all had matching t-shirts, Mr. Waggoner explained to her that he thought it would be a nice thing to do since their cruise itinerary was completely rerouted.  (Keep this in mind as I tell you about the race…) 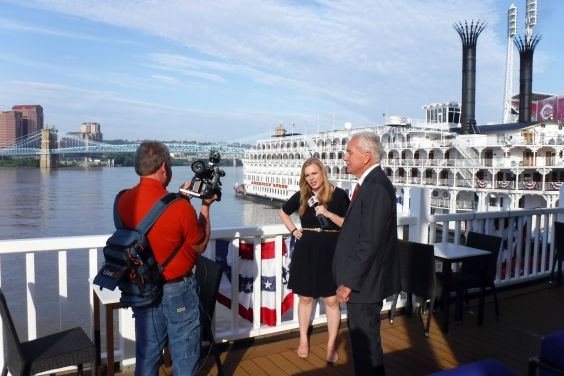 John Waggoner, CEO of American Queen Steamboat Company is interviewed by a local TV station about the upcoming race.

We were supposed to have a pre-race champagne party up on that top deck; however, just as the corks popped and the band was about to play, a rain squall chased us back downstairs.  Fortunately, the canopies were quickly broken down and the band equipment was hauled back downstairs to spare any damage.

It was also fortunate that the skies cleared just in time for the race.  Along with the ‘Queen and Belle of Cincinnati, the crews untied the lines, and we all lined up at the bridge.  To the sound of (very loud!) horns, RACE ON! 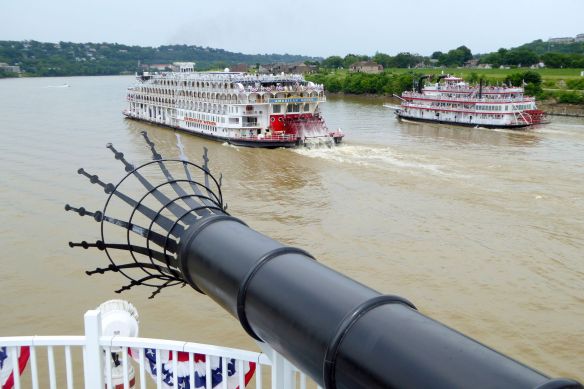 Now, keep in mind that after cruising on the ‘Duchess once before and having been traveling on her for several days already on this cruise, Bruce and I were familiar with just how fast the boat could travel—and, how fast the paddlewheel could turn.

These facts, together with the plight of the ‘Queen’s staff (dealing with disappointed and/or angry passengers), all come into play when I speculate on the reasons behind the outcome of the race.

Oh yeah, and did I mention that the Great Riverboat Race has a history of shenanigans?  Just read that linked article, and you will see what I mean!

According to the ‘Duchess crew, she is the fastest of the three boats and theoretically should win any race between those other two boats.  Having said that, you would think that to be especially true if the ‘Duchess cheated.  Which she did.  First, she got off to an uncharacteristically pokey start (on purpose; see previous photo), and then, before the designated turning point, she turned early, slowed, and then blocked the Belle’ from passing her.  At least, that’s how it looked to all of us on deck! 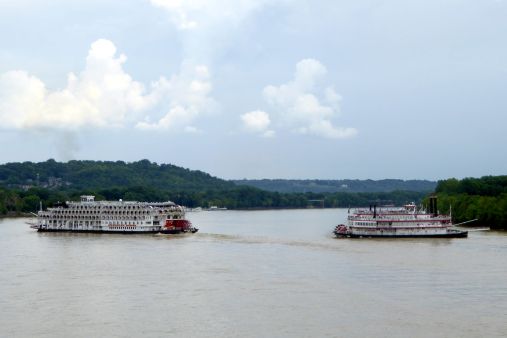 We had already turned (early!) and were headed back to the bridge.

This allowed the ‘Queen to pass both of us.  Then, when we lagged behind, Bruce and I headed aft to take a look at the paddlewheel.  It’s rate of revolutions had mysteriously slowed.  Considerably.  At least, that’s how it appeared to us…

The Belle’ is a smaller boat, and she didn’t stand a chance against the larger and more powerful ‘Queen.  Besides, she was loaded down with a bunch of tourists who had paid to experience the race from ground-zero.

The Belle’ passes us.

The Belle’ had been blocked by the ‘Duchess, so she was unable to catch up to the ‘Queen.

So, dear readers, these are my questions that will never get answered (unless the Waggoners decide to fess-up):

By the reaction of some of the passengers (including one who rudely insulted Mr. Waggoner behind his back by complaining to the Shore Excursions Manager while I was talking with her), you would think this was the Kentucky Derby with money at stake!  Come on, folks, this was all in GOOD FUN!

And, fun it was!  Bruce and I had a blast watching the spectacle, especially at the race start when we were alongside the ‘Queen, and their cruise director was talking smack about us over his very loud microphone.  It was a hoot!

We also enjoyed meeting the Waggoners, the nicest couple you could ever meet!  I had previously written to John, letting him know how much we enjoyed our experience on the ‘Queen.  He wrote a wonderful personal message back, rather than a form letter.  Now, THAT’S how you do business!

Claudette was very personable, and I enjoyed our conversations throughout the day.  I gave her my card, so she could read my blog posts, and she sent me the sweetest e-mail!  If you are reading this, Claudette, thanks!

The entire day was a blast, and definitely the highlight of the trip!

The following are scenes from earlier in the day in Cincinnati.  As you can see, the weather was all over the board!

We couldn’t wait to go over to the American Queen and look for our favorite crew, Tyrone James (“TJ”).  We got to know him during our Mighty Mississippi cruise, and we became buddies! 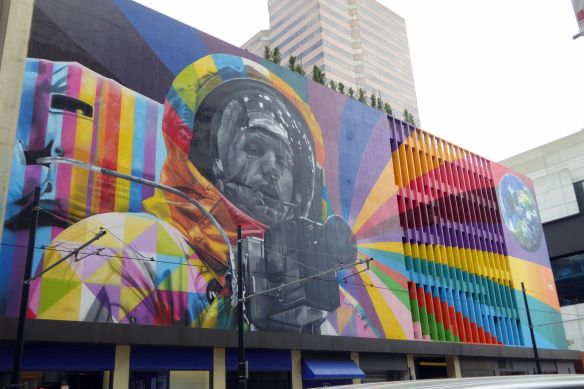 We walked into town and enjoyed what we discovered! What a clever way to disguise a parking garage!  The same with the one below. 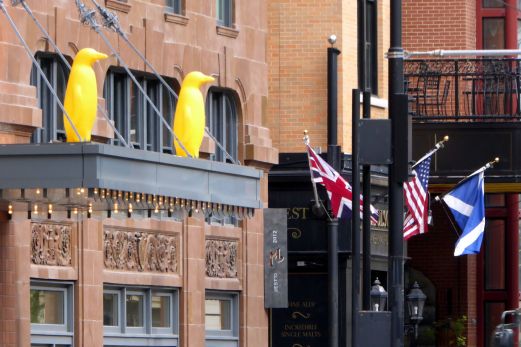 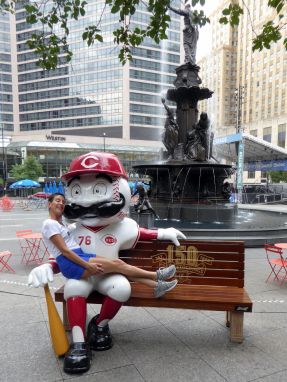 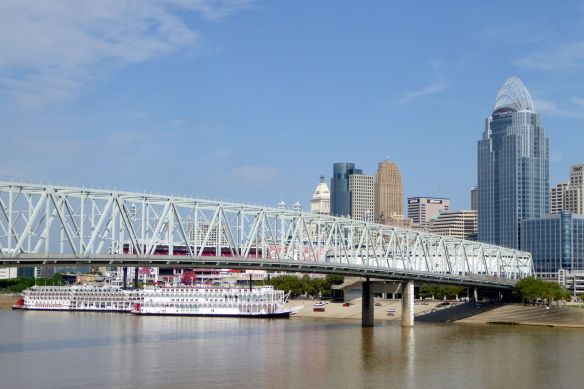 After walking around downtown, we hopped on American Duchess’s hop-on, hop-off bus for a tour around the city.  We hopped back off at Newport on the Levee, across the river from downtown.  It was a nice walk across this bridge back to the boat. 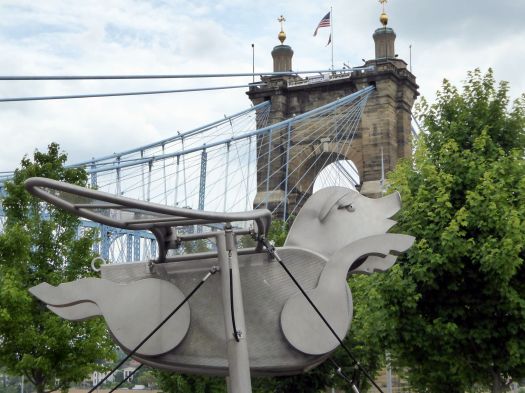 Ha!  I loved the sense of humor of this artist!  This was playground eqt. that kids could climb on and make the pig fly!  This was located at the beautiful park along the river, in front of Cincinnati Reds’s stadium.

This is the world’s largest foot organ, and Bruce played it.  It was built by Cincinnati’s Verdin Company, the maker of bronze bells, street clocks, tower clocks, and carillons.

We got a kick out of this dog biting at the water, while his buddy looked on.  Meanwhile, The Reds’s mascot hangs out on the park bench.