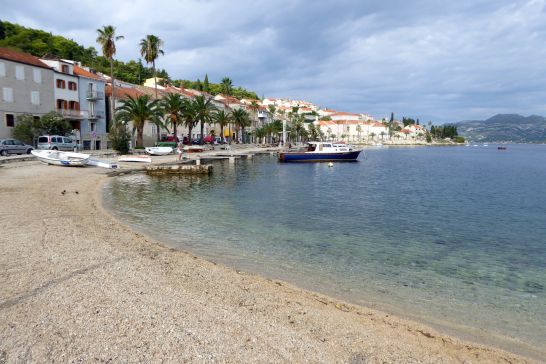 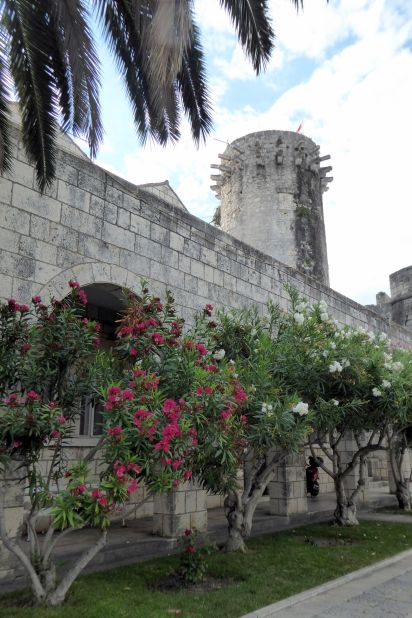 The medieval town of Korcula, surrounded by massive stone walls and towers, was constructed by local stone masters of the 14th, 15th, and 16th centuries.  They did an exquisite job of stone-cutting, adding ornamental accents throughout.

Korcula is known for its stone masters as well as the starting point where Marco Polo began his expedition.  It is also known for its rich ship-building history. 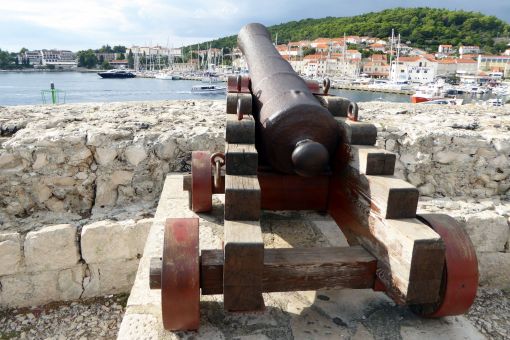 Korcula is one of the greenest of the Croatian Islands.  In addition to its beauty, we loved that the island was not being surrounded by loads of tourists—something we knew we were going to experience in Dubrovnik.  There were no cruise ships, due to the lack of infrastructure to accommodate anything much larger than a yacht like La Perla.  We were able to dock right in town next to the massive stone wall that encircled the town.  Our group of 24 was the only tour group we saw on the island during our walking tour, and during our free time, we thoroughly enjoyed a wonderful day of peacefulness on the island. 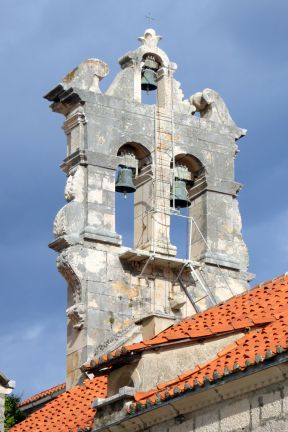 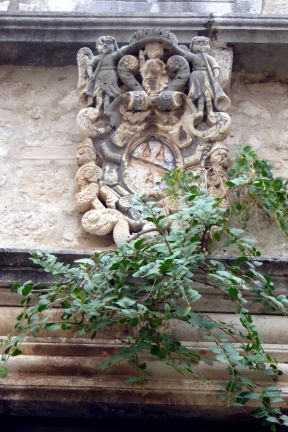 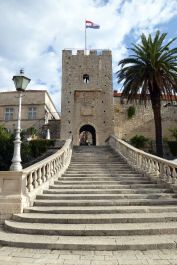 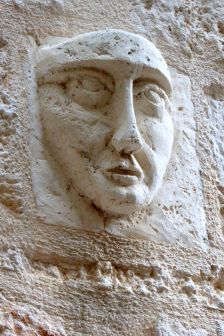 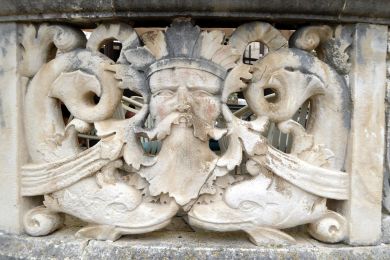 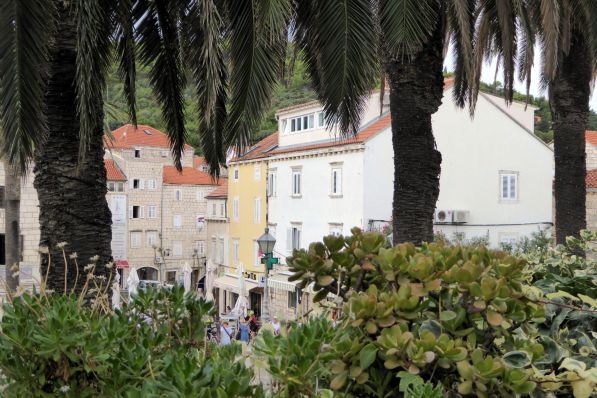 Inhabited almost entirely by ethnic Croats, Korcula is the second-most populated island.  We learned about its history during our guided walking tour as well as during our visit to the Korcula City Museum.

These vessels were used to store wine or olive oil.  They date back to the 1st and 2nd century!

During our walking tour, we ran into Ante, La Perla’s owner (pictured with Sinisa).  He had just bought produce from the farmers market as well as some ice cream for our dessert.

Following our tour, we had plenty of time on our own to explore the narrow limestone walkways, quaint shops, and stroll past the seaside bistros.

On the right side, just before the second set of steps, there is a water polo net up against the wall.  Water polo is very popular in Croatia, and the country is always quite competitive at the Olympics.

I bought a beautiful little hand-carved boat from this craftsman. 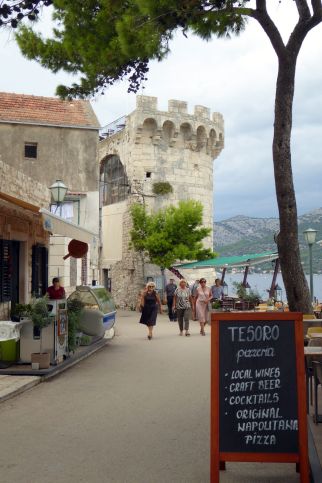 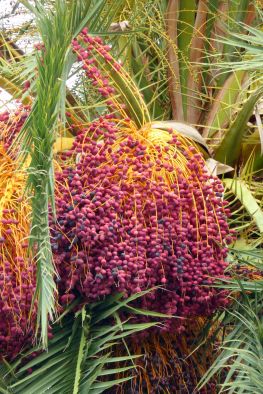 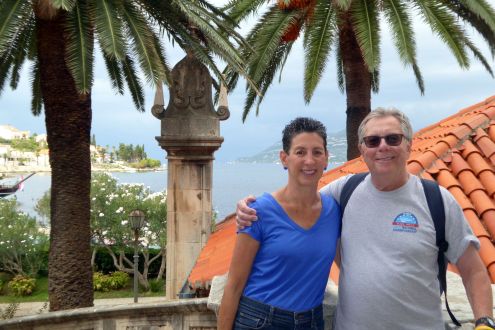 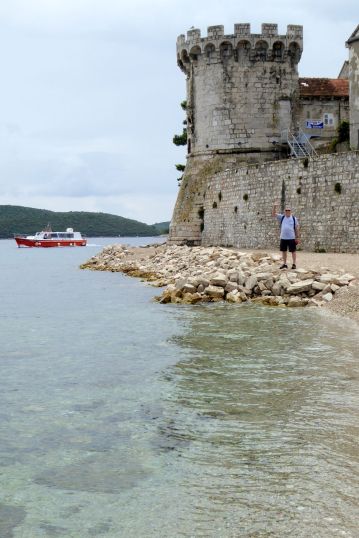 The weather finally cleared up in the afternoon in time for our cruise to Slano, located on a small bay perfect for swimming and kayaking.  La Perla anchored, so we could enjoy the crystal-clear Adriatic Sea.  Ahhh! 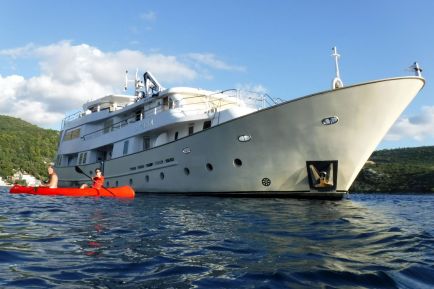 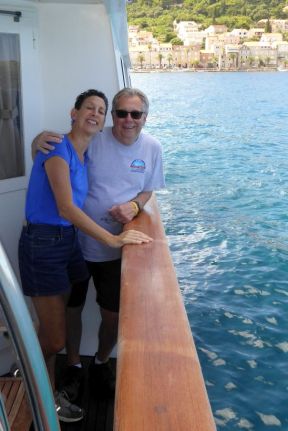 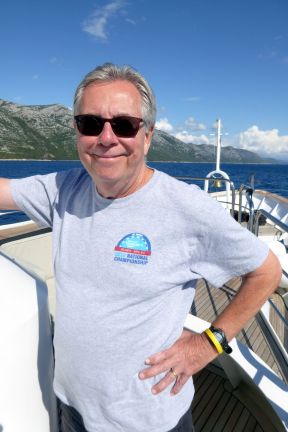 The evening was lovely!  A local fisherman came on board with a cooler full of fresh oysters harvested from the waters nearby, and local wine from family vineyards we could see on the hillside.  We learned all about both while we were offered as many oysters as we wanted to eat.  I’m not big on raw oysters, but I managed to suck down ten of them after working up an appetite from my swim! 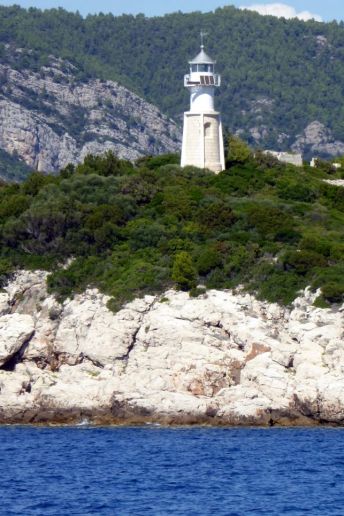 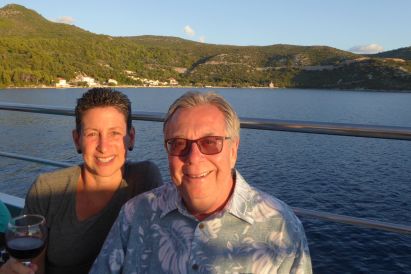 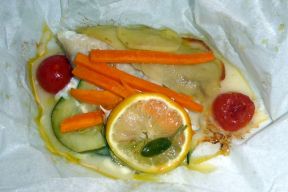