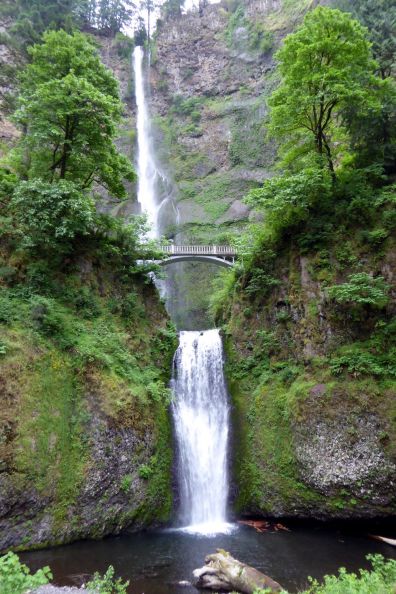 Multnomah Falls measures 620 feet from top to bottom.  On September 4, 1995, a 400-ton rock slid from the face of the upper falls and dropped 225 feet into the upper falls pool.  It sent a 70-foot splash over the bridge and drenched a wedding party having their photographs taken!

The American Empress stayed overnight in Stevenson, so the following day, we took a tour to see the breathtaking Multnomah Falls and the panoramic views from Vista House.  Unfortunately, it was a cloudy day and not the best for photography; however, we couldn’t complain.  The weather was fabulous otherwise!

During the afternoon, we took the hop on-hop off bus to the Bonneville Dam where we were fortunate to have an opportunity to tour the facility.  We arrived at the dam’s visitor center just in time for one of only three tours scheduled for the day.  It was fascinating to see how the dam and power plant operates.  Just as was done at McNary Dam, a fish ladder system was built for fish migration, and we were able to get a close look at it from above and below.  Viewing windows allowed us to see the fish pass through.

When we returned to Stevenson, there wasn’t much to see in town, because it is very small.  We were quite entertained, though, just hanging out along the shoreline and back on the boat, where we watched wind surfers and kite surfers having a blast!  The dependable high winds on the riverfront is a huge draw for them, and they come from all around.  We had a perfect vantage point from our veranda—great for photography! 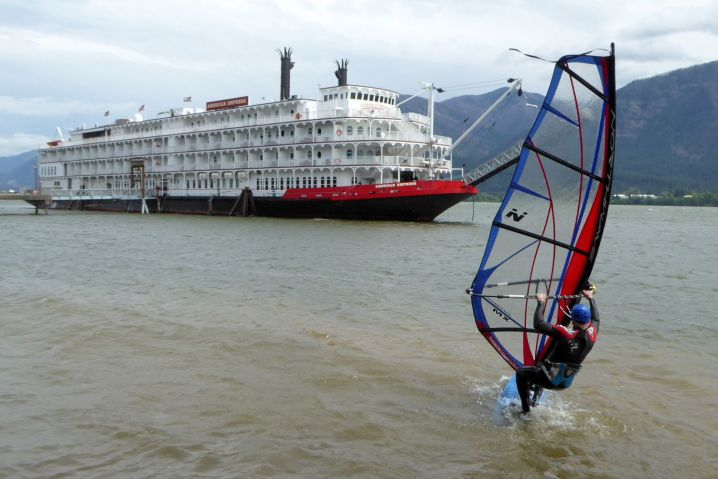 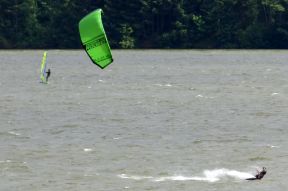 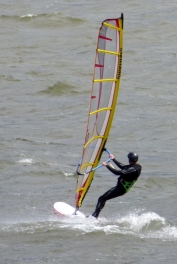 Our final port was Astoria, Oregon where we had a gorgeous day to cap off our cruise.  Situated near the mouth of the Columbia River, the deep-water port city of only 10,000 residents has a growing art scene, and a cool vibe.  The Riverwalk thrives with cafes, a brewery/restaurant, and shops served by an old-time trolley that stops alongside them. 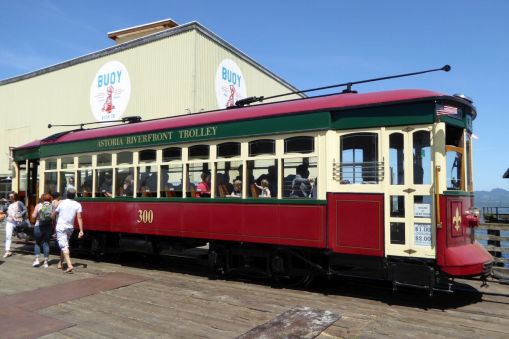 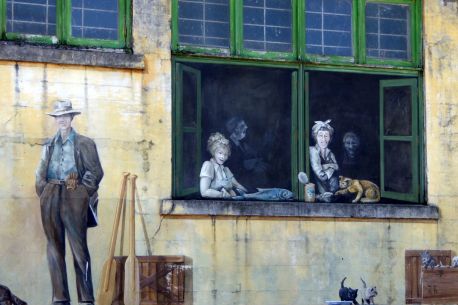 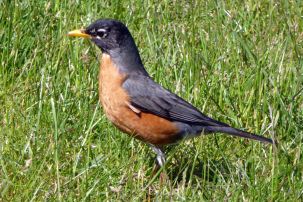 The highlight of the hop on-hop off route was enjoying the breathtaking views of the river from the Astoria Column.  When we disembarked the bus, we were given a souvenir balsa wood glider kit.  After hiking up the 164-step spiral staircase, we flew our gliders from the viewing platform and watched the long flight to the ground below.  If you were lucky, it didn’t end up in the trees!  I was lucky– twice.  I had written our names and date on the bottom of the wing, so I would know if I had found my own glider down below.  Somebody else found it and placed the glider on a bench in front of the gift shop.  Trying my luck again, I gave it to another American Empress passenger getting ready to climb up to the top.  Sure enough, I later found my glider on the ground, and it now sits atop my computer printer as a souvenir—at least for now.

Meanwhile, the exterior of the 125-foot Astoria Column has a beautiful wrap-around mural depicting the history of the region from 1792 to the 1880’s.  If the mural was unwound, it would be over 500 feet in length!

Our next stop in Astoria was back downtown to see the Sunday street market, an excellent market considering the small size of the town.  In addition to the usual produce and foods, there were several high-quality artists and crafters. 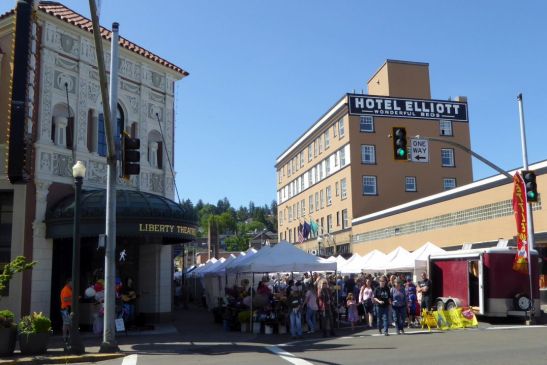 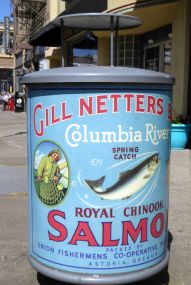 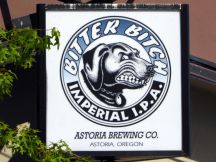 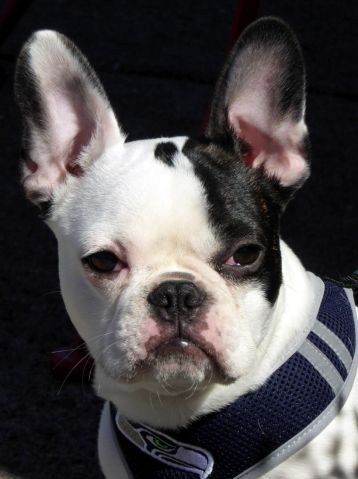 Next, we toured the Flavel House.  Built for Captain George Flavel in 1885, the 11,600 square-foot Queen Anne style house was full of beautiful woodwork and antiques.

The backyard of the Flavel House

The woodwork was beautiful throughout the house. 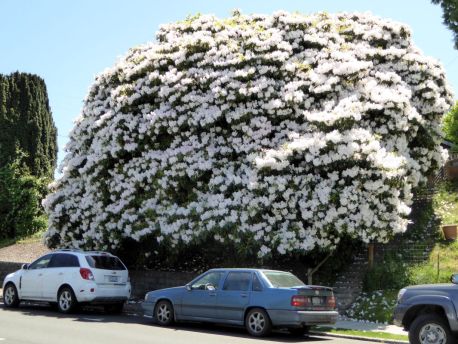 Rather than take the bus back to the boat, we walked down to the riverfront and enjoyed the views of the river along the Riverwalk.  As we passed by the brewery, restaurants, and shops, we could hear the seals barking just below. 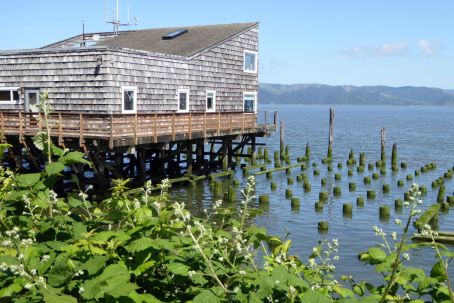 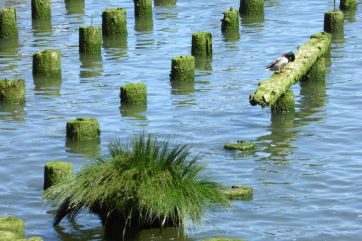 The American Empress was tied up at the same dock as the Coast Guard cutters and in front of the Columbia River Maritime Museum, so there was plenty to see around the boat as we made our way back on board for our final night aboard the beautiful paddlewheeler. 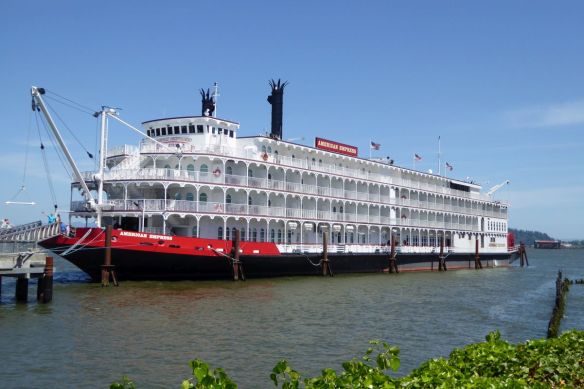 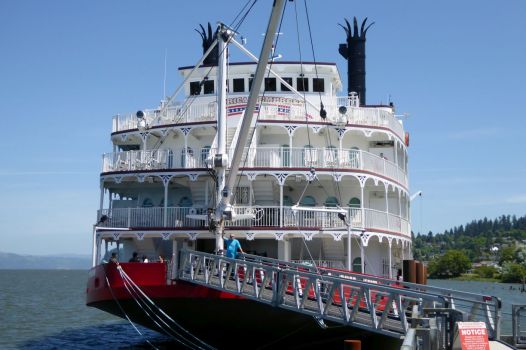 2 thoughts on “AMERICAN EMPRESS: PORTS ON THE SNAKE AND COLUMBIA RIVERS, PART 2”