The American Queen stayed a full day in Baton Rouge; however, I still found myself racing against the clock to get everything in that I wanted to see.  Bruce joined me for the first half of the day; however, he came down with what turned out to be a nasty case of bronchitis, so he was down for the count before the day was done.

We set out in the morning for the Saturday farmer’s and craft market in town, conveniently located near the hop on-hop off bus stop.  Thanks to the American Queen staff, they were thoughtful enough to make that arrangement for us!

As veteran craft show vendors ourselves (www.CookedGlassCreations.Etsy.com), we always appreciate and enjoy seeing what others create.  This particular market had some interesting and fun creations available.

Our next stop:  Louisiana’s State Capitol.  I had visited Baton Rouge before with the American Queen in 2013; however, Bruce had never seen the city.  Knowing how much he would enjoy seeing the capitol, we made sure to get a visit in while he still had the energy. 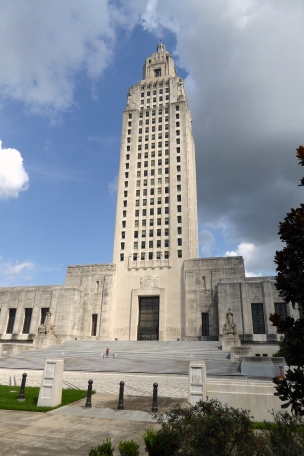 It was a prettier day when I was there in 2013, so you may want to check out my photos from that post.  Other than the state capitol, we didn’t see much that day, however, because it was Good Friday, and much of the city was closed down for the weekend.  This time, it turned out that there was so much to see, a day wasn’t enough time to get it all in. 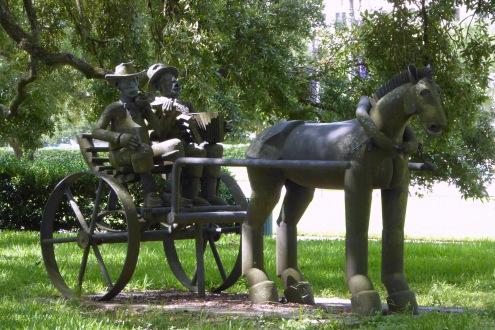 Following our visit to the capitol, we ended up spending far more time at the Capitol Park Museum than intended, because the exhibits were excellent.  Upon arrival, we headed straight up to the second floor to learn all about the various cultures in Louisiana, a state very different from our native state of California.

Louisiana was first inhabited by numerous tribes of American Indians, but then it was colonized by the French, Spanish, and English.  It was built largely by African slaves, and then acquired by the United States.

In 2005, Bruce and I had visited New Orleans for several days on a dedicated trip to the city; however, the second-floor exhibit at the museum encompassed the entire state.  The presentation of the exhibits was done in such a fun and colorful way, and today’s pop culture was included along with the history of each region.  In the colorful exhibit on Mardi Gras, for example, they even covered New Orleans’ gay krewes, including the Krewe of Yuga, the first organized krewe founded by and for gay men. 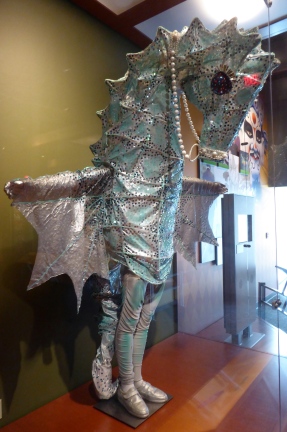 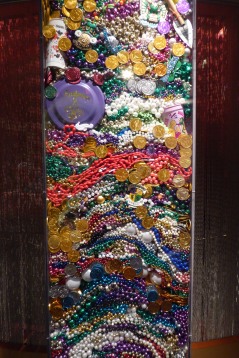 It was interesting to learn the difference between a Cajun and a Creole.  Cajuns were historically a French-speaking group that now mostly speak English.  Prior to 1955, French was their first language.  They are quite culturally mixed in heritage, because the Acadians who settled in Louisiana in the late 1700’s intermarried with other ethnic groups, including Spanish, Germans, and Anglo-Americans.  Today, they remain a culturally distinct group, linked by their shared cuisine, music, and geography.

During the early 1800’s, native-born Lousianians began defining themselves as “Creoles” to distinguish themselves from foreign-born and Anglo-American immigrants, and, in the case of free people of color, from enslaved African Americans.  After the Civil War, a white Creole was someone who traced his or her heritage to white French or Spanish colonials, and a Creole of color was of mixed ancestry (African, Native American, French, or Spanish) or else descended from French-speaking slaves.

Today, there is still no consensus in Louisiana on the term “Creole,” and it was interesting to listen to videotaped interviews of experts on the subject who all seemed to disagree.

One thing I know for sure about Creoles, though; they sure have an interestingly mixed cuisine, and New Orleans is known around the world for their fabulous food.  Influenced by American Indians, Africans, Anglo-Americans, French, Spanish, Germans, Italians, and those from the Caribbean; the resulting mix of spices, flavors, and styles of cooking is tasty!  Just remembering how good the food was in New Orleans made my mouth water as I perused the exhibits at the museum.  Thankfully, the food aboard the American Queen was wonderful, including the Cajun and Creole dishes we enjoyed throughout the Louisiana portion of the cruise. 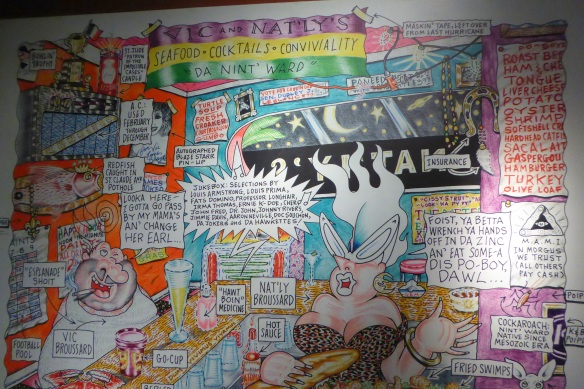 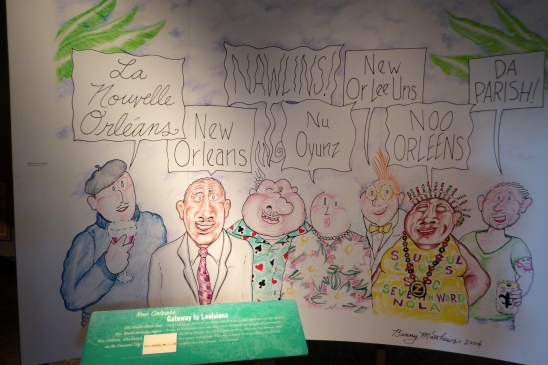 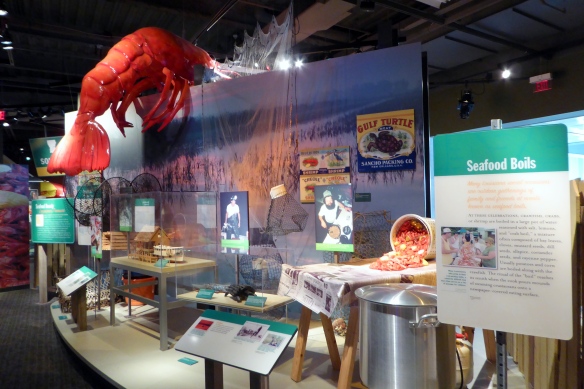 After spending so much time enjoying the second-floor exhibit, we only took a glance through the first floor, because Bruce was out of steam and ready to return to the ship.

I went back out to see the old state capitol building located just across the street from our dock.  What a surprise it was!  As I entered the lobby and looked up, I literally exclaimed, “Wow!”  I was alone, but I couldn’t help myself.  The stained-glass ceiling window was that beautiful. 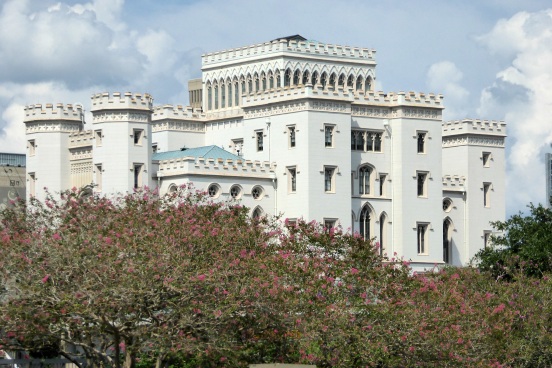 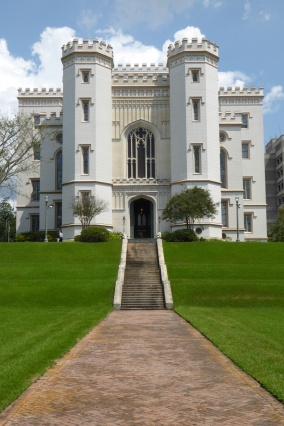 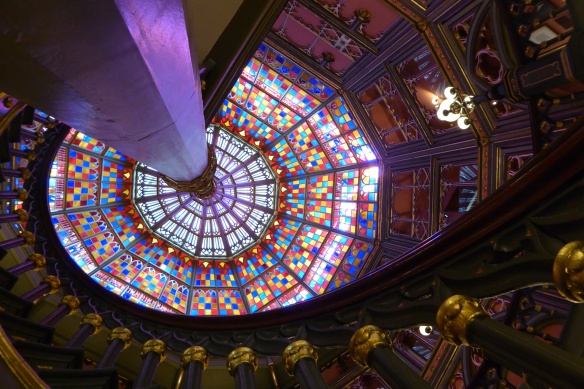 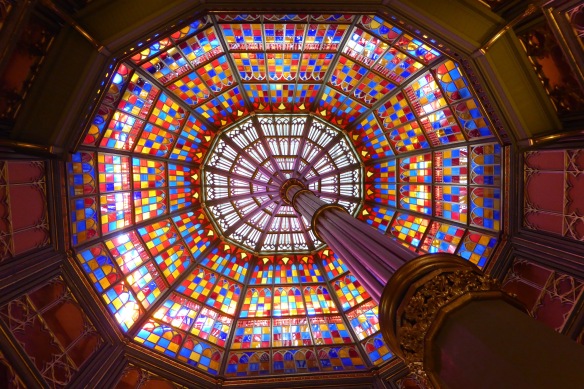 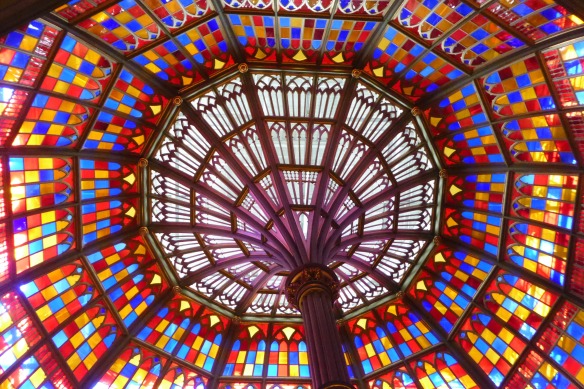 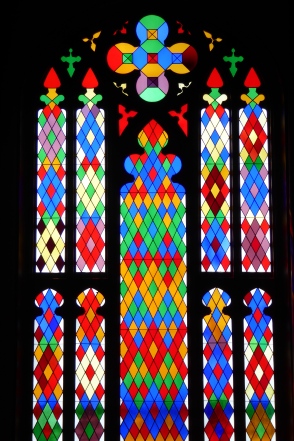 Built in 1850 (and restored in 1880 after the war), the capitol building was cast aside in 1932, when the new capitol was built, which is the tallest state capitol in the United States at 349 feet.  (Megalomaniac, narcissistic Governor Huey Long made sure of that.  Does that remind you of our current president, perhaps?)

The most interesting exhibit in the building, I thought, was on Huey Long, and it was done in a very clever way.  As you walked into the room a black faux crack went across the floor, up the wall, and across the ceiling, dividing the room in two.  In the yellow-painted right half of the room, the exhibit detailed all of the good things about Governor Long’s character and his accomplishments.  The left, blue-painted half of the room pointed out the ugly and evil side of the governor, and all of the ways he tarnished Louisiana.  It was this half of the room where I saw the uncanny parallels between Long and President Trump. 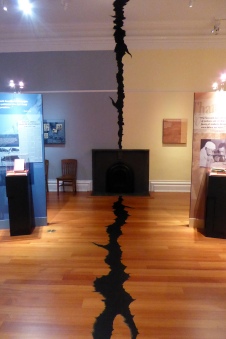 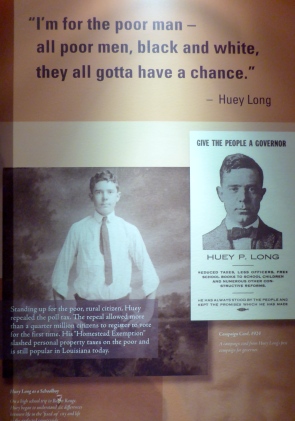 When we return to Baton Rouge aboard the American Duchess, I look forward to showing Bruce the Old State Capitol.  We also plan to return to see the first floor of Capitol Park Museum, and perhaps take a stroll through the Louisiana Arts & Science Museum, located directly across from the Old State Capitol and adjacent to the riverboat.

For my final post about our three weeks aboard the American Queen, coming up next:  LAST BUT NOT LEAST: NOTTOWAY