When we left the port for a walk through the streets of Santiago de Cuba, we hoped we would meet some locals we could converse with in English, since our Spanish is extremely limited.

A large center for artisans caught our eye as a first stop, because I had also hoped to bring back a small wood handicraft to add to my international collection from my travels.  Surprisingly, in addition to woodcraft, we also spotted a glass artist who did torch work to create glass figurines.

Although Eduardo didn’t speak English, his assistant, Grisel, spoke enough to communicate with us and translate to Eduardo.  We conveyed that Bruce was also a glass artist, and I showed them my earrings that Bruce had made for me.  The two men talked “shop”, and a bond was formed.

After a long conversation, we wished them our best and thought we would continue on our way to Cespedes Park where the cathedral was located.  Eduardo turned and grabbed a glass globe containing a purple flower from his display shelf and insisted on having Grisel wrap it up as a gift for us.  We insisted on paying, but they wouldn’t allow it.  Instead, we asked Grisel what her favorite color was, so we could send her one of Bruce’s fused glass bracelets.  Business card in hand, we were on our way, amazed at what had just transpired. 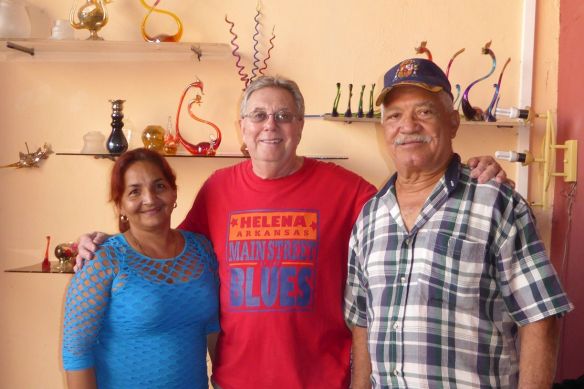 On average, Cubans earn the equivalent of a mere $20-$40 per month.  (Actually, their new currency, the Cuban Convertible Peso, CUC, is worth about $1.)  The fact they wanted to give us a “present” (as she insisted) spoke to what our interaction with them meant.  They were so pleased to learn we were Americans, too; and, it warmed my heart there was still somebody in the world who liked Americans.  I truly believe that won’t be the case in the coming years…

During other interactions with the locals who spoke English, we were pleased at the overwhelmingly pro-American sentiments expressed to us.  I was thankful we visited Cuba so early in Trump’s presidency.

After listening to a violinist in Cespedes Park (the town square), we climbed the stairs and peeked into the cathedral.  More enjoyable, though, was watching the bustling streets below us.   A few 1950’s-era American cars drove past, and well-dressed students in their crisp blue uniforms walked by with their backpacks.  (Later in the week, in the Dominican Republic, I would learn just how hard the word “backpack” would be for a Spanish-speaking woman to pronounce in English!) 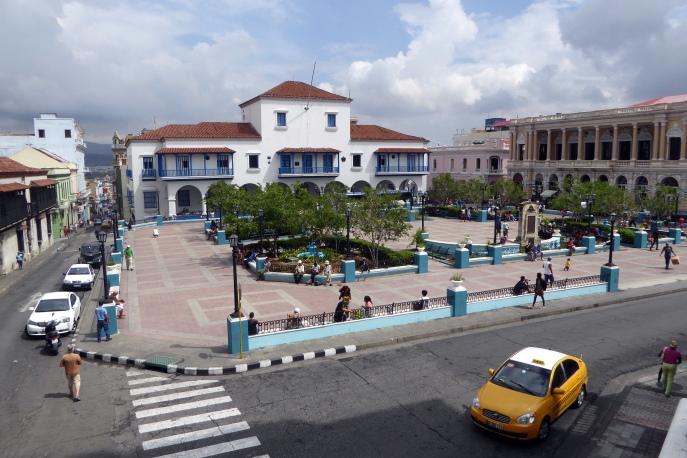 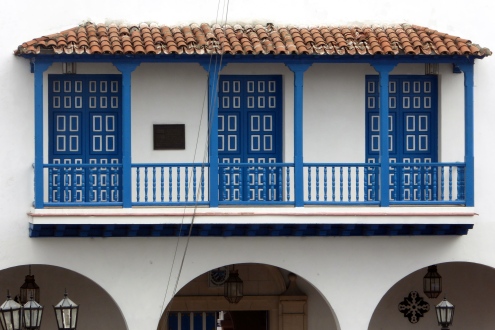 Fidel Castro gave his first speech from this balcony in 1959.

The first building on the left was built in 1519.

Along our stroll through the streets of the city center, we came across a small town square where an unusual band was performing for tips.  The featured instrument was a 1950’s hand-cranked organ, unlike anything we had ever seen before.  When I gave the musician a big smile and a curious look, he responded in kind and was pleased I wanted to photograph his band.  The music they played was fabulous, so I shot this clip:  https://youtu.be/rvc7L25oIgg . 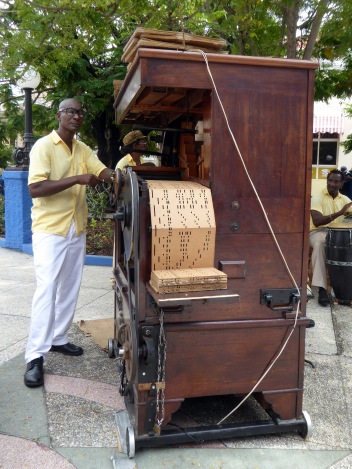 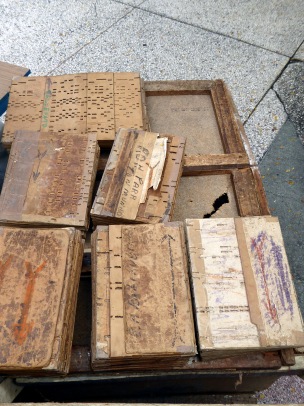 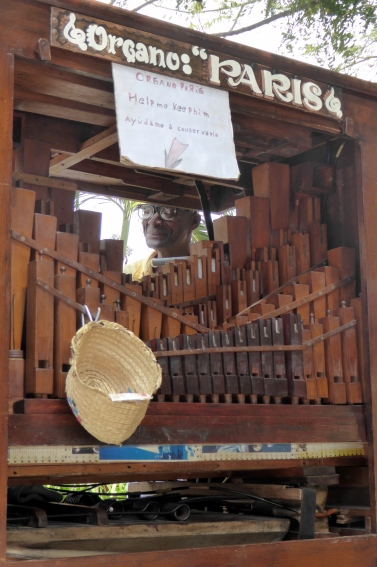 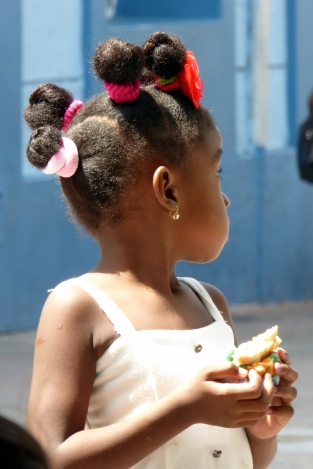 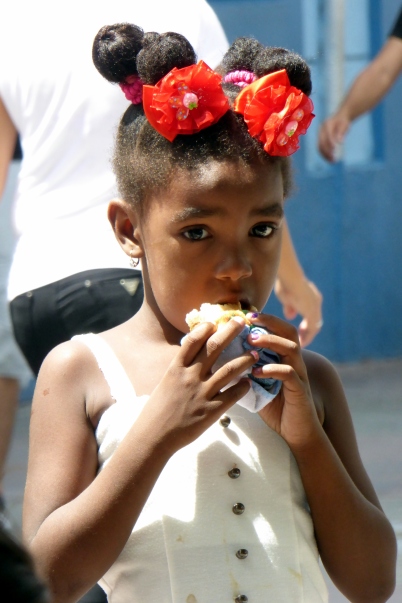 We enjoyed strolling along the pedestrian street and watching the people go about their day.  Although I am not much of a shopper back at home, I am always curious to poke into local shops when I am traveling, just to see what the locals buy and sell; and, at what price.

Playing dominoes is a favorite pastime in Cuba, so we paused to watch a couple of games being played in the small city parks. 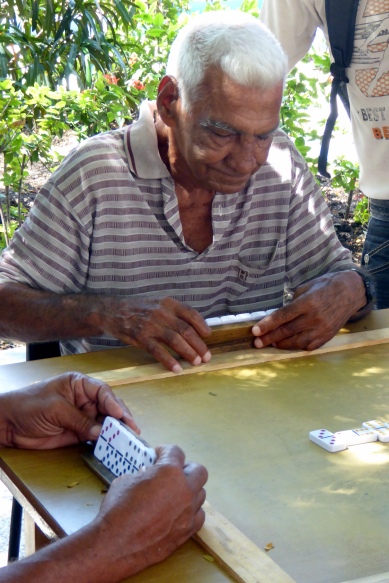 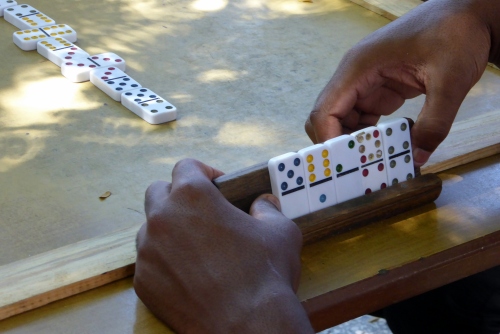 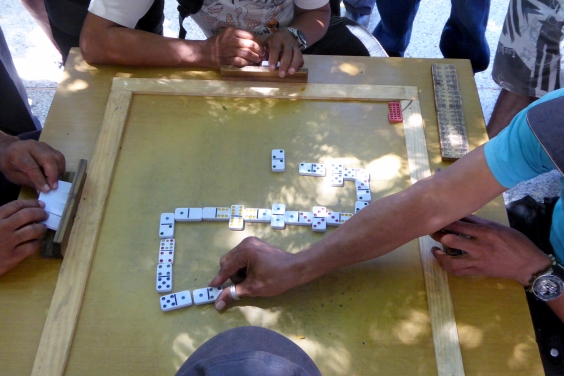 Before making our way back towards the ship, we allowed plenty of time to return to Eduardo’s shop to buy them a cold drink and say a final goodbye.  Eduardo had left for a meeting, but we treated his wife to a cola and promised to send one of Bruce’s glass bracelets when we returned home.

In the same artisan’s complex, we stopped to look at some other shops and came across a friendly man who spoke English.  He asked, “Where are you from?”  When we replied that we were from the United States, he grinned and asked if he could practice his English with us.  The extroverted man said he didn’t want anything from us, but did we have time to just have a conversation?

Well, that is exactly what we had hoped for when we stepped foot on Cuban soil…

Next up:  OUR NEW CUBAN FRIEND “BENI”

4 thoughts on “MAKING FRIENDS IN CUBA”