Since joining U.S. Masters Swimming (USMS) in 2010, I’ve met so many wonderful people I would have never met otherwise.  Participating in any swimming event means being around others who have a shared passion:  SWIMMING.

My past few days have been happily filled with swimming and being around many amazing people who share my passion.

Two of the days were spent (in part) in Atlanta volunteering in the hospitality suite for the 2016 USMS Convention.  In addition to getting to spend time away from the pool with a few of my teammates, it was a great meeting delegates from around the country and seeing people again who I had met at previous competitions. 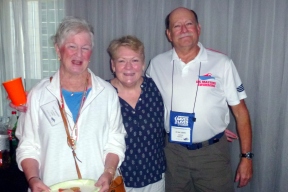 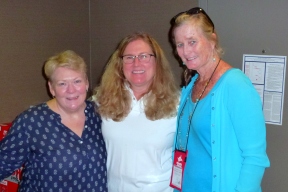 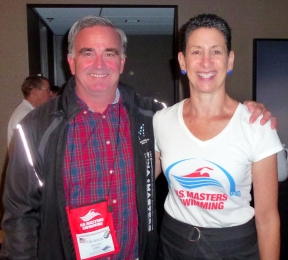 Bumping into Tim Waud brought back fun memories of this: 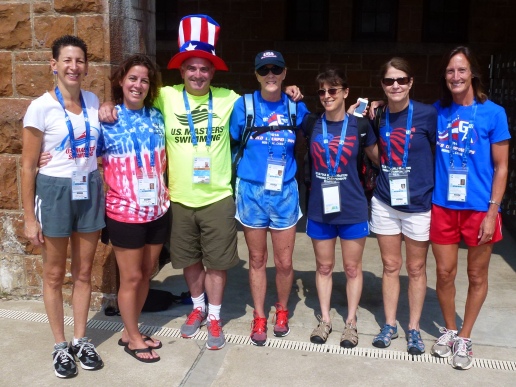 That’s Tim in the patriotic hat representing USMS as Head Coach for our team at the 2014 FINA World Championships in Montreal.  I’m the one in the white shirt, and all the other gals are my awesome teammates! 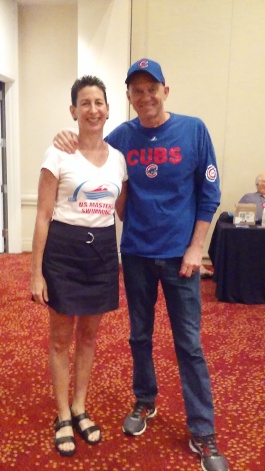 I forgot to bring my camera back to the convention today, so this is a grainy picture of me with three-time Olympic Gold Medalist, Rowdy Gaines.  If you watched swimming in the last few Olympics, that was Rowdy’s enthusiastic voice you heard on NBC.

Meanwhile, yesterday, Bruce and I headed in the opposite direction to Warner Robins for the Georgia Golden Olympics, a qualifying meet for the upcoming 2017 National Senior Games which will take place in Birmingham, Alabama next June.

In addition to several of my other teammates, my favorite teammate, Anne Dunivin, came to compete in the meet.  Type the name “Anne Dunivin” in the search box up above, and you will see I have written about Anne several times.  She is a rock star in the swimming world.  Why?  Because she is going to be 100 years old on October 17th, and she is still passionate about swimming! 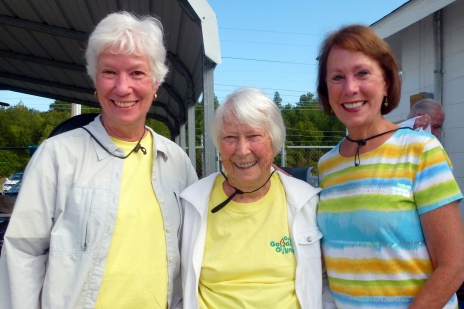 Anne, with daughters Virginia and Barbara 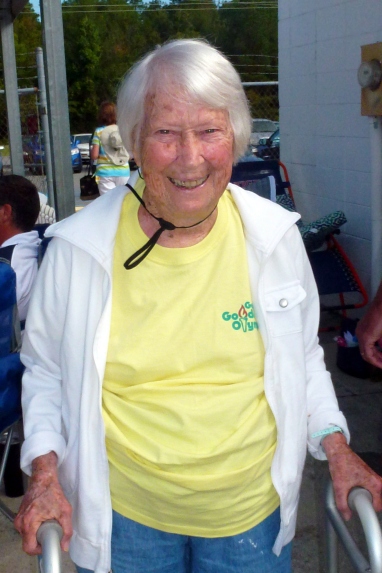 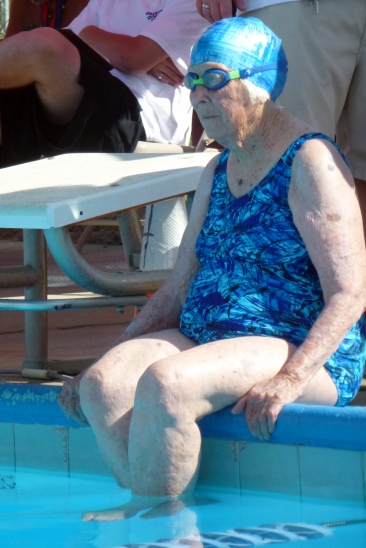 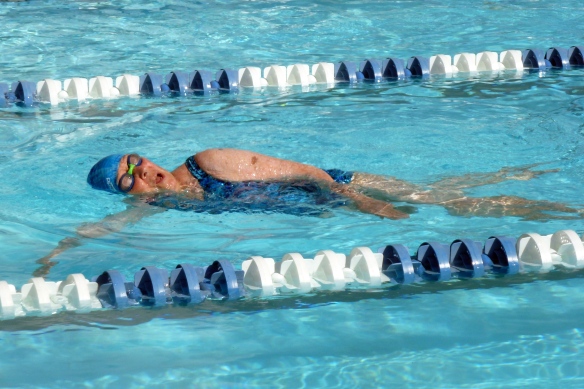 Anne, in great form racing the 100 Yard Freestyle.  She won gold!  (Of course, it helps to outlive your competition!) 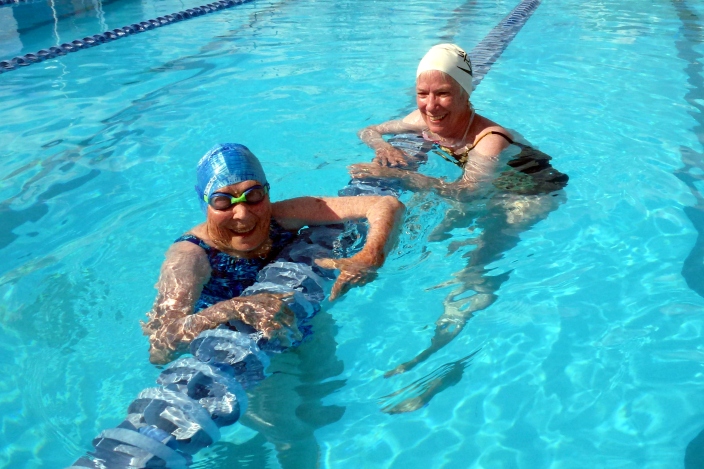 Anne and her daughter, Virginia.

Anne was in demand at the meet.  She was interviewed by a local newspaper and two TV stations (WGXA and WMAZ)!  Here she is giving an interview for WGXA: 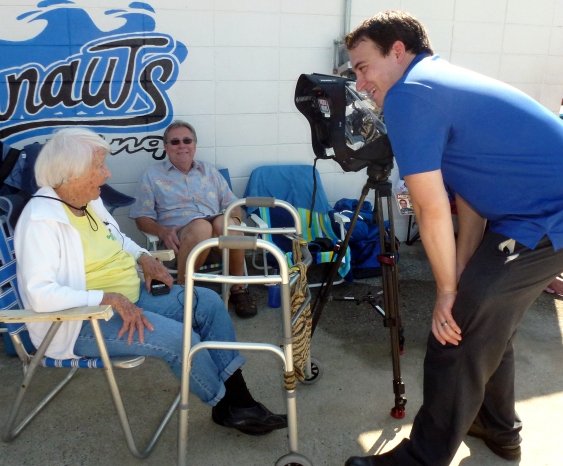 That’s Bruce getting a kick out of listening to the interview!

It was a long day (10 hours!) in the 94-degree heat, but it was well worth the 90-minute drive south to spend time with Anne and her daughters, cheer Anne on, and qualify for the National Games.  I ended up with four gold medals and one bronze medal in the meet; and, I was the only woman to compete in the 200 Yard Butterfly.  (Hey, you have to show up to win!) 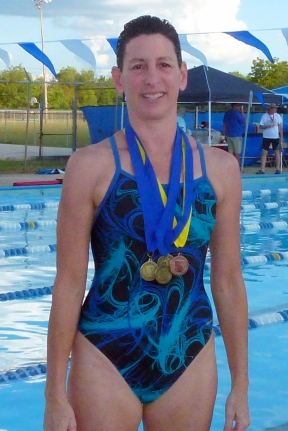 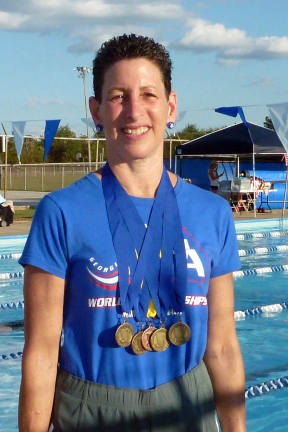 The picture on the left is with four of my medals, and again after I picked up my final medal.  I swam in the first event (400 Yard Individual Medley) and last event (500 Yard Freestyle), so it was a very long day.  It was dark by the time we arrived home!

Today, after returning home from the USMS convention, I received a wonderful message from Julia Galan of Swimspire.  She had asked me to write another article for her website, and she notified me that it went live.  Here it is:

Julia had asked me to submit a photo of Bruce shooting underwater swimming video and another of me swimming.  Little did I know, she dug up some photos her dad had shot of me at 2014 USMS Summer National Championships to add to the article, too!  It was such a happy surprise to see the article on her website with some fun photos that brought back great memories! 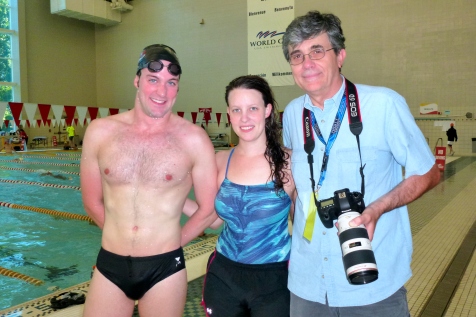 Julia, with her brother, Peter, and her dad, Florian

These past few days have been so joyful, inspiring, and FUN!  I hope you have a passion– or discover one– that brings you this much joy as well!

6 thoughts on “A SHARED PASSION”