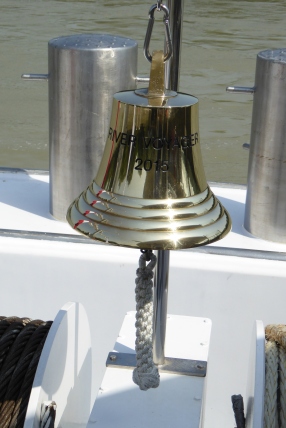 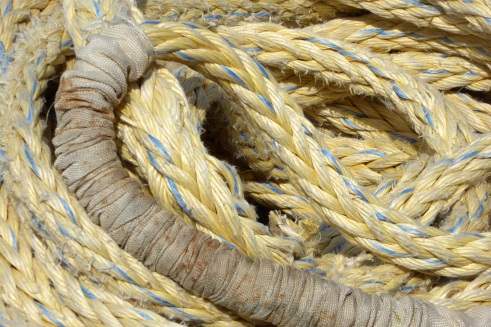 The previous three Vantage Deluxe World Travel river cruises I had taken in Europe were with my mom, and they were on boats that have since been retired from their fleet.  Vantage had three new boats built, and we boarded the newest of the fleet in Budapest.  Introduced into service this year, we were about to embark on the 14th sailing of the River Voyager.

At first, I wasn’t sure what I thought about the new, modern feel of this boat; but, once we had a good look around, it was love at first sight.  The jazz theme of the décor definitely hit a soft spot in my jazz-loving heart, and the additional outdoor seating in front of the forward Blue Note Lounge as well as behind the Cotton Club café was a nice surprise.  (In retrospect, given the high water level in the rivers these extra outdoor lounge areas on the lower decks were a huge benefit, because the captain had to close down the top sun deck of the boat while cruising under low bridges.) 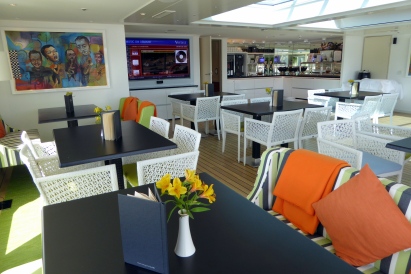 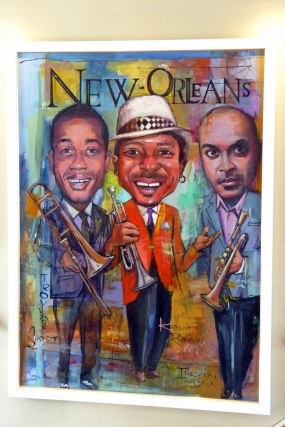 Along the wall leading into the Blue Note Lounge 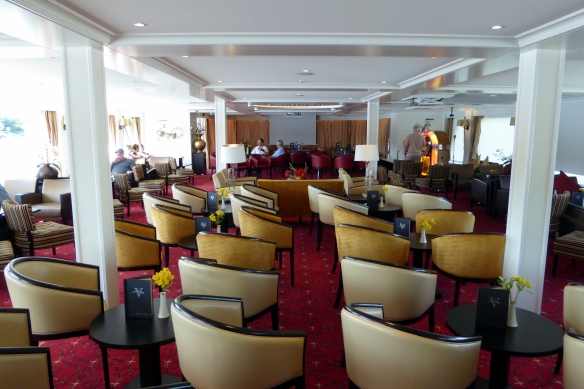 At the far end of the lounge, there were floor-to-ceiling windows looking out onto the forward deck.  The drapes were closed at this moment in preparation for a lecture.

The top deck of the ship was closed during portions of the cruise due to low overhead bridges.

The cabins were wonderfully appointed, and the bathrooms were actually larger than those on the older boats.

I didn’t photograph the cabin; however, I did get this (distorted!) shot of the bathroom.  The lower right is a very large drawer with a pull-out trash can beside it.  There was plenty of counter space  (on the left), and a shelf full of wonderful toiletries.  There was plenty of room in the shower, and I loved the adjustable shower head and glass door.  The toilet was to the right, and towel racks were located on the walls to the left.  It was actually quite roomy in there! 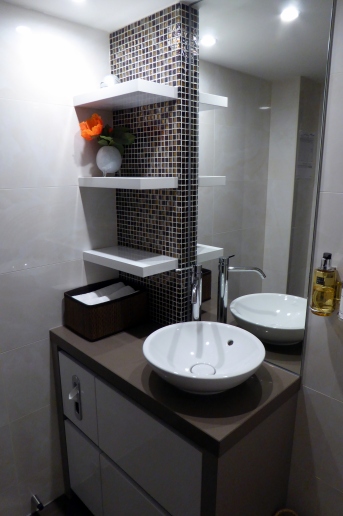 This is a public restroom located mid-ship.  Nice! 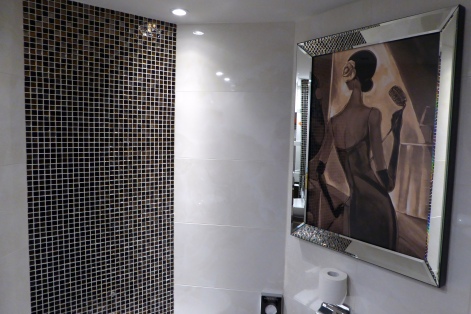 The other side of the same public restroom.

Technologically, the River Voyager was very modern, and a great WI-FI system was accessible from anywhere on board.  The front desk staff even loaned out iPads at no charge as well as brand new bicycles with saddle bags and helmets.

The staff on board was fabulous!  Not only were they unfailingly friendly and warm, the service was outstanding. 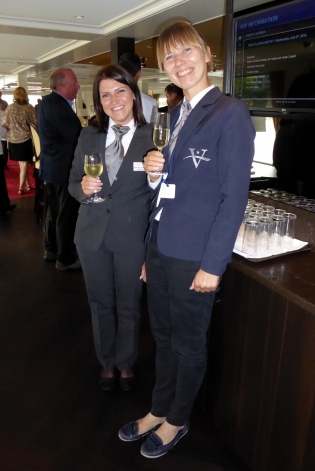 Our cabin steward, Bowo.  We named our towel dog after him and kept him throughout the cruise.

The dining room had open seating, so we always gravitated to Robert’s section, because he was our favorite waiter. 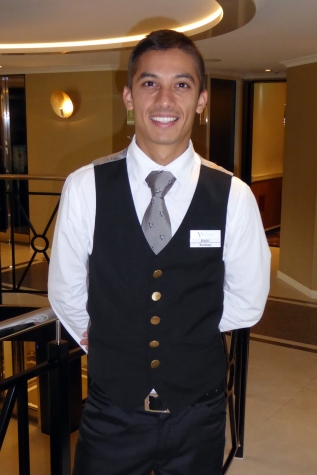 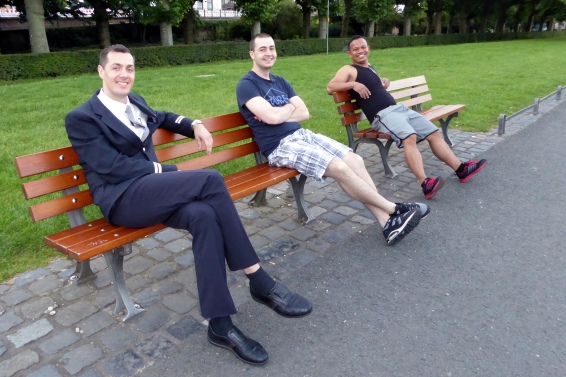 A well-deserved break for the crew!  That’s the head chef on the far end.

The food?  Fantastic!  Our Balinese chef did a wonderful job with his staff in his surprisingly small kitchen, and we found ourselves raving at every dinner over the food and presentation.

Chef Ketut (“Chef”) had a great sense of humor, too, as well as a wide, cheerful smile.  Later in the cruise during the galley tour, when asked how long it took to cook the whole pig they brought out during our traditional Bavarian lunch buffet, he replied, “Cooking the pig wasn’t the problem, it was catching it!” 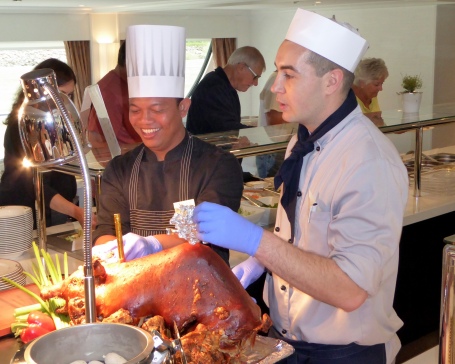 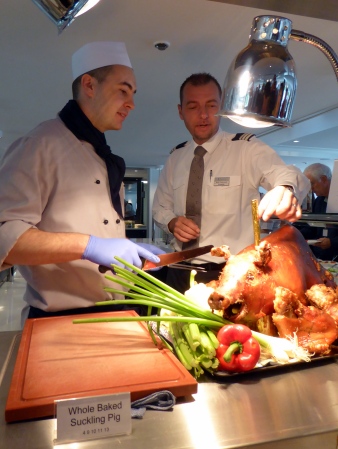 As it turned out, that lunch was quite a highlight!  Complete with soft pretzels graciously handed out by Chef, flowing beer served by the staff, and a buffet of sausages of every description (with sauerkraut, of course!); it was fabulous!  (Thinking back, I don’t think I had eaten sausages and sauerkraut since my last cruise in 2011!  Meat isn’t a normal part of my daily diet, but as they say, “When in Rome…”)

Although the previous river cruises were on ships with a maximum capacity of 145 and the River Voyager could cruise with 175 passengers, I would say that is the only negative of the newer river boats.  I like the intimacy and quaintness of small boats, but the trend is going towards larger boats (and larger ships) for economic reasons.  Still, I wouldn’t hesitate to book a cruise on this very same boat again!

As for the passengers, in general, I have found them to be much more experienced travelers than mega-ship cruisers.  Conversations over meals or around the ship were always lively and interesting with plenty of travel stories to go around.  I especially enjoyed hearing about other river cruise experiences, and the advice we received about itineraries was very helpful. 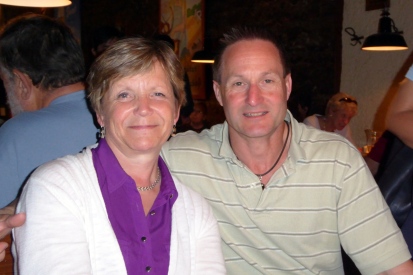 Marg & Wendell, our dining partners for lunch in Heidelberg, and a few times on the ship.

We first met Betsy and Mary on our pre-cruise tour, and then in Vienna, Betsy and I ended up going to the hospital together with Renata as our escort and interpreter.

Betsy, Renata, and Me at the hospital

Partying it up during the Captain’s farewell cocktail party.

Over all, I can’t say enough good things about our experience.  The best part?  Seeing Bruce enjoy it so much that he already has our next Vantage river cruise picked out!

4 thoughts on “RIVER VOYAGER IN REVIEW”