We initially had no intention of spending two nights in Luray; however, rooms in Charlottesville for tonight were either sold out or MUCH too expensive. I don’t know if it’s a big event happening there this weekend or just Father’s Day, but somethin’ is definitely up.

Here at the motel in Luray, a family reunion has consumed most of the rooms. Rather than dining out, they brought their own food with them, and have picnics on the motel grounds, instead. The coolers our neighbors brought seem to be attracting flies, so one of the men has been passing time by systematically eliminatng them with a fly swatter. With beer in one hand and the swatter in the other, I’m watching out the window while he keeps count outloud with every kill. “31…32… Oooh, a double! 47 and 48!”

At the moment of this writing (6:30 PM, June 20), I’m unplugged from the wall outlet, because we are in the midst of a thunderstorm– the other reason I am writing this in our room at 6:30 PM. Knowing the storm was coming, we had an early dinner and returned to hunker down. It seems as if our reunion group is waiting until the storm passes to have their picnic. “57… SWAT- 58…”

The day started out ok, though, and we took another drive through Shenandoah National Park along Skyline Drive. It was quite hazy, so I only shot a couple of photos:

Meanwhile, the following are a few I shot yesterday and saved for today’s post: 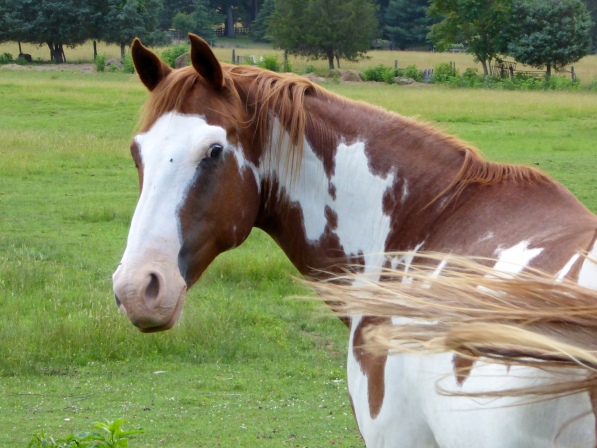 “61… 62…” It seems as if the remaining flies have a reprieve as Mr. Fly Swatter is now contently sitting in his lawn chair awaiting for dinner to begin. I’m rather disappointed, because I had planned on going out to congratulate him on his 100th kill. Oh well, I just hope those are raisins in that carrot salad on the picnic table.

The rustic cabin we had hoped to stay in, however, the nightly rate was too steep.  We opted instead for the Trip Advisor-recommended motel across the street.  Except for the flies, it was just fine.