On a rainy day (and 20 degrees below normal temperature for June 1), what better way to spend the day than staying dry indoors sampling Vermont’s foodie favorites?

We actually did get a fair bit of walking in outdoors before the rain settled in for the afternoon. Burlington is a nice, walkable city in the historic downtown center. The 4-block long outdoor pedestrian street is lined with historic buildings on each side with shops and restaurants. “Homeport” was our favorite store– 4 levels of EVERYTHING you could possibly want for your home all loaded in a historic building. At the end of the year, it must be an inventory nightmare for them, because they have such a huge selection. From sink strainers to interesting decorative wall hooks, they had dozens to choose from. It was a very cool store.

Working up an appetite from our walk along Church St. and along Waterfront Park and back, it was time to sample Vermont.

While walking along Church St. we came across this 124-foot mural entitled, “Everyone Loves a Parade!”  It was custom-designed by renowned Canadian muralist, Pierre Hardy, wide-known for his inventive and meticulously-detailed, large-scale pieces.  Grand Master Samuel de Champlain leads the charge as the scene depicts an evolution in time along Church St.  Notable and everyday Bulingtonians, downtown businesses, and iconic images of the past 400 years are distinguished through overflowing illustrations.

Follow this panorama photo, and the next three photos from left to right.

First up for sampling: Lake Champlain Chocolates. Unfortunately, there were no tours today (or tomorrow) because of new flooring being installed, but we went anyway to check out the factory and hunt for factory seconds to purchase. (Hey, they’re just going to be eaten anyway, so why purchase at full price?)

Our next stop: Ben & Jerry’s Ice Cream. Photos weren’t allowed on the factory tour, but I did get a few shots where cameras were allowed. 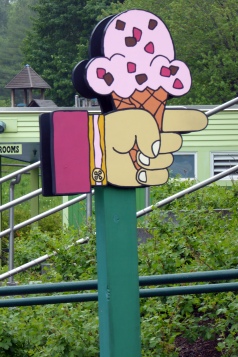 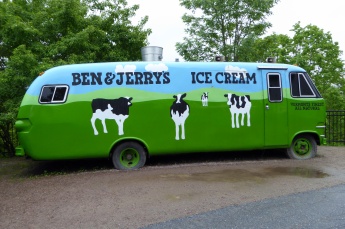 Bruce and I felt right at home at the factory, because Ben and Jerry’s hearts are in the right place as far we are concerned. Their company philosophy is spot-on, and they value social justice and the environment. They even had free hook-up stations in the parking lot for electric vehicles to get juiced while they’re owners get a fill of ice cream! 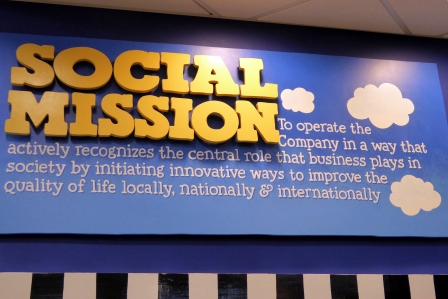 Recycling is also huge there and everywhere here in Vermont. The state’s goal is to reach a 40% recycle rate, and the businesses we have encountered are enthusiastically in support of that goal. Our motel is on board as was the restaurant we ate at this evening.

This is my kind of place; such a cool vibe. Georgia (and most of the rest of the world), GET WITH THE PROGRAM if you have any hope of leaving Planet Earth habitable for future generations!

The sampling portion of our day concluded with a stop at Cabot Cheeses where they had samples out of every variety of cheese they make as well as selections of maple syrup, dips, and other delicious foods. Fabulous!

While there we picked up a small bottle of Mannaz Mead from Groennfell Meadery, and just popped it open to sip as I type. Strange. It’s made with 100% single-source honey, something we have never tasted (or heard of) before. I think it’s an acquired taste, and I’m not sure I want to acquire it.

Earlier, after all the sampling in Burlington and Waterbuy, we made our way north on one of Vermont’s most scenic byways to Stowe. The Stowe Motel and Snowdrift is ourTrip Advisor-recommended home for a couple of nights, and it’s a beautiful, spacious property with large expanses of grass in between the buildings.

Upon arrival, we were greated by “Remy”, the owner’s gorgeous German Short-haired Pointer. We were also upgraded to a larger room without even asking! NICE!

Dinner in town was at a casual little 5-table place, “Bender’s Burritos.” Check this out: A sweet potato and black bean burrito with Spanish rice, minced ginger, mild cheddar cheese, chipotle mayo, and salsa verde. De-LISH, all one pound of it!