Can you imagine designing a castle to be built as a symbol of your love for your wife, hiring 300 men to build it over a four year period, and your wife dying suddenly just two weeks before the castle’s completion? This was the tragedy that broke George Boldt’s heart in 1904 as he neared completion of the castle he designed to have built on Heart Island, named for the heart shape of his private one-home island.

After this happened, he sent a telegram ordering his 300 employees to immediately stop construction. They dropped their tools, left the island, never to return. George Boldt never returned either, and the 127-room castle was abandoned and fell into disrepair. Vandals looted the castle and obliterated the walls with graffiti, adding to its sorry state.

In 1977, the Thousand Islands Bridge Authority assumed ownership of and immediately began a rehabilitation program. No government funds are used in its ongoing renovation, and it is completely supported by tour revenues and private donations.

George Boldt was quite the self-made man having come from a poor family who immigrated to America. Ultimately, he became the most successful hotel magnate in the U.S. and is most known for managing/ profit sharing the Waldorf-Astoria in New York, and the Bellevue-Stratford in Philadelphia.

Today, Bruce and I hopped on an Uncle Sam’s Boat Tours sternwheeler cruise for their “2 Nation Tour” of islands belonging to both the U.S. and Canada. The narrated tour ended at Boldt Castle where we did a leisurely self-guided tour before taking a shuttle back to the mainland.

Fortunately, we had PERFECT weather today, a dream scenario for an open-deck tour of one of the most gorgeous places we had ever seen. To say this was the highlight thus far in our road trip would be an understatement. It was magnificent! 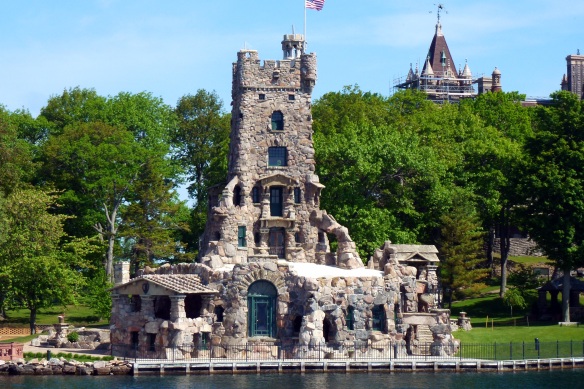 The view from the boat of Boldt Castle’s outer “playhouse.”  We later returned on foot for a closer look.

The view of the “power house” from the boat. This is where power was generated for use by the castle. 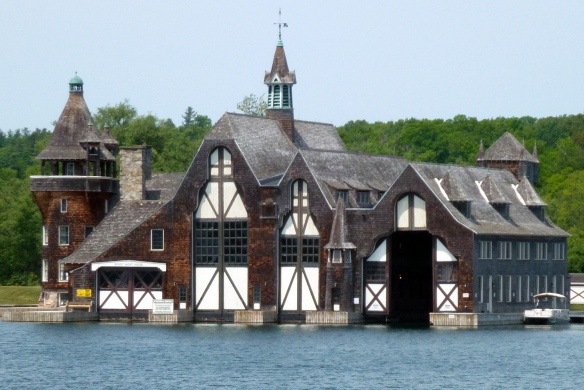 The boat tour continued before returning to the castle.  We went from viewing mansions, to Boldt Castle, to, well, this humble little cutie.  This is the one I would love to rent for a late-spring vacation!

This bridge connects the United States to Canada.

Following our narrated boat tour, we were dropped off on Heart Island to tour the castle. 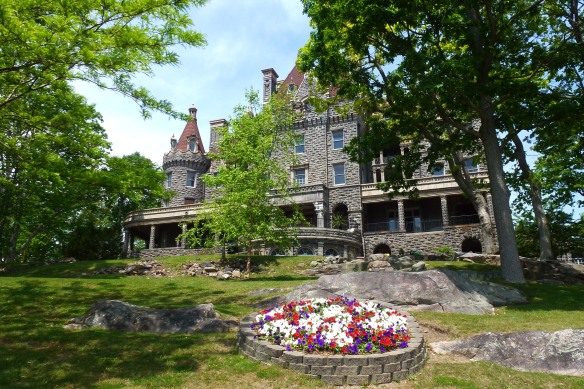 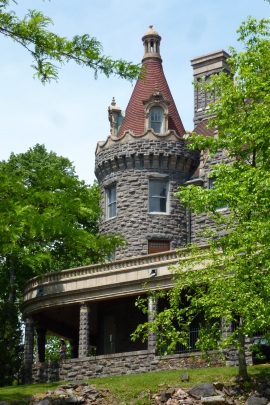 There was a “before” photo in each renovated room of the castle showing the damage done by vandals.  The “after” was exquisite!

The remainder of the afternoon was spent exploring the nearby village of Clayton where we visited the Antique Boat Museum and wandered through the quaint historic village streets. Lovely.