This post was written following my final race at U.S. Masters Swimming Nationals in Maryland.  We are now home, so once I get caught up with more important things, I will write about Montreal, Quebec City, Baltimore, and Alexandria.  Stay tuned!

After having way too much fun seeing sightseeing in Montreal in between my races at the 2014 Masters Swimming World Championships (and again in Quebec City), I made the decision to get down to business when I arrived in Maryland. 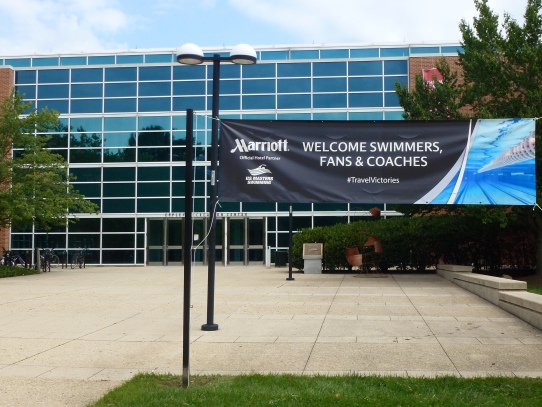 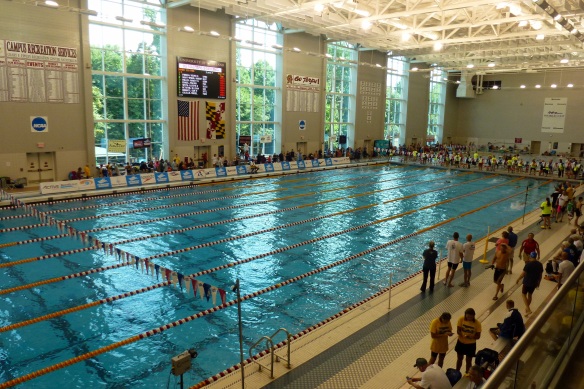 At the beginning of U.S. Masters Swimming Long Course National Championships, my body was depleted and I was sure I had completely blown my taper. Still, I thought I would do my best to rest up and prepare to race.

We had seen Washington, D.C. two years ago, and our plans were to see Baltimore after the completion of Nationals. We’ll also be back in the region next year when we spend six weeks touring the northeast in our car.

Besides, Bruce was also exhausted, and he was perfectly happy taking long naps in between our time at the pool.

My first race was the 200 Meter Butterfly. Although my time was faster than in Montreal, I was told I was disqualified for an “alternating kick.” WHAT? I had never been DQ’d in my life, and I was sure I had swum the race clean. Slow, but clean.

As it turned out, I was just one of five women in that event who got DQ’d by the same judge. After looking at the video Bruce shot of my race and seeing my feet practically glued together throughout the race, I was completely baffled. I sent my video to the chief official who happens to also be my teammate to ask for advice. Knowing I had the 400 Individual Medley the next morning, I feared getting another “DQ” next to my name in the results and missing out on a potential medal opportunity.

Ed wrote back, “Don’t change a thing.” Huhhh? Surely, he wouldn’t want me to receive another DQ!

At the pool the following day, after a horrible fitful night of sleep, I raced the 400 IM and earned a medal. Woo Hoo! I had still felt quite tired, so my time was much slower than I had raced that event in the past, but at least it was faster than in Montreal.

After collecting my medal and interviewing my adorable 98 year-old teammate, Anne Dunivin, for a team newsletter article, I headed to the locker room. It was there that I learned my name had been announced on the P.A. to report to the official’s desk. Uh-oh! What did I do this time? Did I get DQ’d in my race and the officials neglected to tell me when I exited the pool? Would I be asked to return my medal? Gulp. 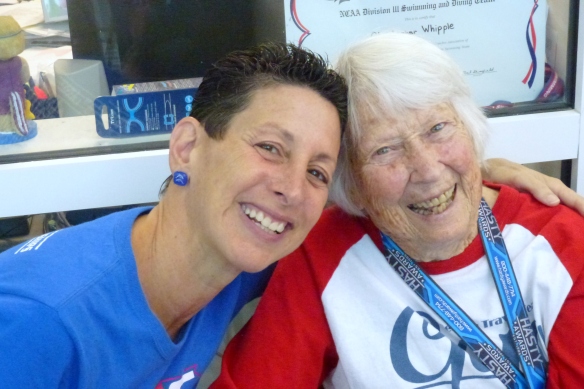 When I reported to the desk, Jim Carey said he needed to speak with me in private. He had a very serious look on his face as he escorted me to an office and shut the door behind us. GULP!

What came next was completely unexpected. Jim offered a sincere apology for the “inappropriate” DQ and told me that not only would my DQ be overturned, the other four DQ’s were being overturned as well. In addition, Ms. DQ (note: It was not Dana who issued the DQ) was being relieved from her officiating duties on deck.

That next day, I felt more rested, and I swam the best breaststroke relay split in two years during the following day’s team relay. Things were looking up!

That night, I did a 10-hour crash and burn. Finally, I felt well-rested and ready to race my best in the 200 Meter Breaststroke. I knew I would win a medal if I placed 2nd in my heat, and I was determined to do so.

Getting up on the blocks, I hummed my re-written them song, “Aqua Dog,” sung to the tune of “Aqua Lung,” by Jethro Tull. (See my previous post on this completely lame attempt at songwriting!) I felt good, and I was ready to conquer my previous demons with this event. It used to me my most difficult event to race—that is, before I took on the 200 Butterfly and 400 IM.

During the race, I thought about the advice I had been given by my teammate, Dale Alton. I resisted the urge to let adrenaline get the best of me and take my first 50 out to fast. I was patient, and I felt strong. Surprisingly, I kept feeling strong throughout the second 50 meters and after the turn during the third 50. Usually at this point my body starts protesting to the point where I lose all strength in my legs and shoulders. Perhaps I hadn’t completely blown my taper after all! 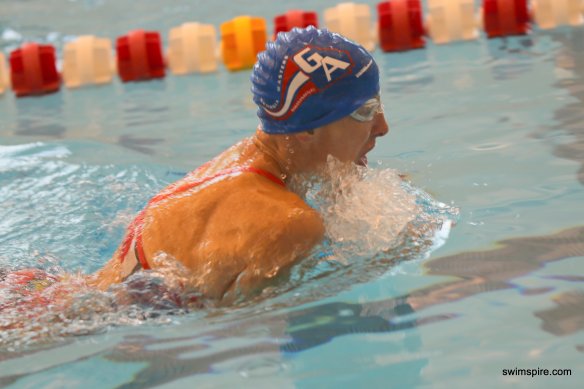 A special thanks to Florian Galan for capturing me in action.

As I raced that third 50, I could see the swimmer in the neighboring lane up ahead. I was determined to run her down, because I had no idea where the other swimmers were around us. I knew I had to place 2nd to medal, so only one could beat me.

I closed the gap going into the third turn and amazingly enough had enough strength to attempt a “sprint” in the last 50. I increased my turnover rate, dug deep, and gave it all I had.

Although I was unable to catch the gal in the next lane (she beat by 4 seconds), I swam the best 200 breaststroke race of my life. No matter the results, I felt a sense of pride as I looked up at the results. Seeing a “2” next to my name meant a well-earned medal.

As I exited the pool, I realized I had never looked at my time. All I wanted to confirm was that I had indeed beat the other competitors around me and the winner; but, I also was curious if my time had beaten my Worlds time and perhaps even my seed time from my June long course meet in Athens.

What I heard next SHOCKED me. The first number of my time was “3” which meant I beat my seed time by at least six seconds. The other numbers were even better. I ended up with a time of 3:54.47; 12 seconds faster than my seed time (my race time at UGA in last June) and 14 seconds faster than at Worlds. In addition, it was the best 200 Meter Breaststroke time EVER! 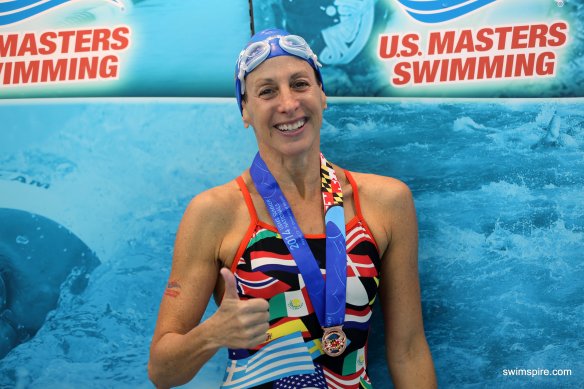 Florian took this photo of me as well.  I was one happy camper!

For more photos of the 2014 USMS Summer National Championships, go to:  http://www.fototime.com/inv/AE19CAC4F90547D