Greetings from the American Queen steamboat! We have been to Helena, Arkansas and are about to depart Vicksburg, Mississippi, however, I haven’t yet had a chance to post about Memphis; our port of embarkation. The days have been full, but FUN! So, making time to write has been difficult… But, I will take you back to our time in Memphis, before boarding this beautiful steamboat.

Our vacation with American Queen Steamboat Company included one night at the Marriott Hotel, in Memphis, Tennessee, before boarding the American Queen. The hotel was located downtown, on the Main Street trolley line with one of the stops right outside of our hotel. We were given a trolley pass to use throughout our stay, so we decided to take advantage of it and ride the entire route of all three trolley lines and take in the sites. Given the weather conditions, it was the perfect way to go. It was cold and rainy on our date of arrival and extremely windy the following day, as the storm blew out. According to Weather Channel, the “feels like” temperature was 37 degrees! Considering the average high temperature in Memphis is 61 degrees, in March, this was a bit of a shock! So, we opted to spend most of the time huddled up in the heated trolley cars, rather than brave the cold.

We made our way on foot to see some of the highlights, though. After settling in at our hotel and hopping onto the Main St. trolley, we disembarked at Union St. and walked over to the beautiful historic Peabody Hotel. Built in 1925, the Peabody is known more for their interesting tradition than anything else: The Duck Parade. Each day, at 11:00 AM, the resident ducks are escorted from their “penthouse suite” to the elevator, for a ride down to the lobby. They parade down the red carpet and up the carpeted stairway that leads them into the lobby fountain, where they splash around until 5:00 PM. At precisely 5:00 PM, the Duck Master sets out the red carpet and stairway for their parade back to elevator and up to their suite.

This has been a tradition since 1944. And, the lobby is packed up to an hour ahead with people vying for the best view of the 10 minute ceremony. We arrived too late for a front row view, so we headed up to the balcony to look down on the spectacle. Photos from up there weren’t possible, so I waited until the following day to return and catch some shots of the ducks frolicking about in the fountain. What a hoot!

Following the duck parade, we walked over to Beale St. and had dinner at Blues City Café, a funky bar-b-que joint that happens to also be known for their “World Famous Tamales”. Mom had the ribs (tasty!) and I enjoyed the best gumbo and tamales that lived up to their great reputation. 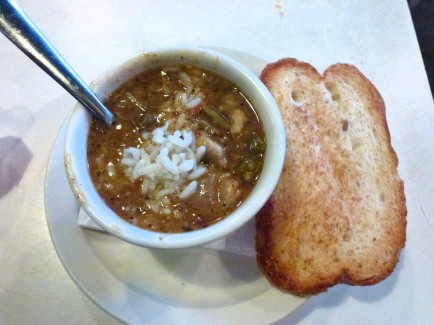 The remainder of the evening was spent strolling the famous section of Beale St., home of the blues. Memphis is a pilgrimage for those wanting to visit the birthplace of the blues, of soul and of rock ‘n’ roll. On Beale Street, W.C. Handy put down on paper the first written blues music. Joni Mitchell sings about Handy in “Furry Sings the Blues”. Check it out here: http://youtu.be/ybCwd1yBP88 .

For those who love the Blues, Beale St. is the place to be. Walk down the street and you can hear the sounds of blues at every bar doorway you pass.

The following day, we spent the blustery cold morning riding the trolley lines to get our last glimpses of Memphis life before boarding the American Queen. And, we took one last stroll on Beale St. to pay our respects to W.C. Handy.

Onward to the American Queen! 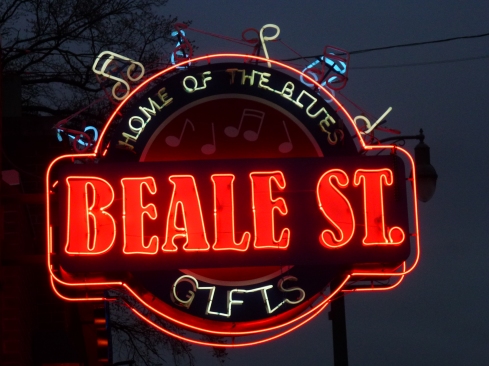 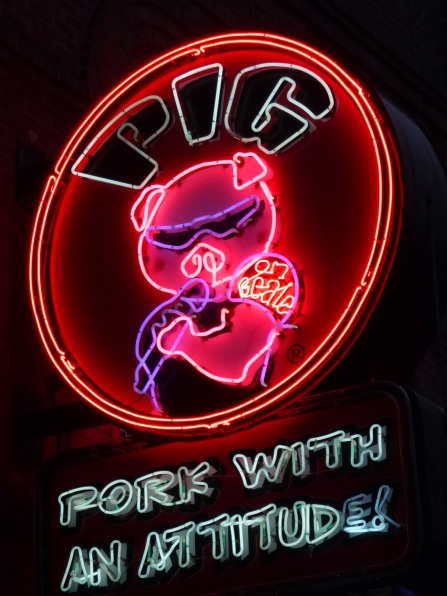 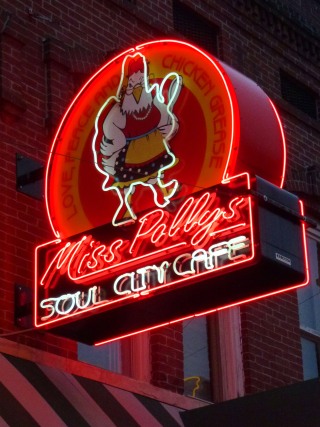 7 thoughts on “Memphis, Birthplace of the Blues”