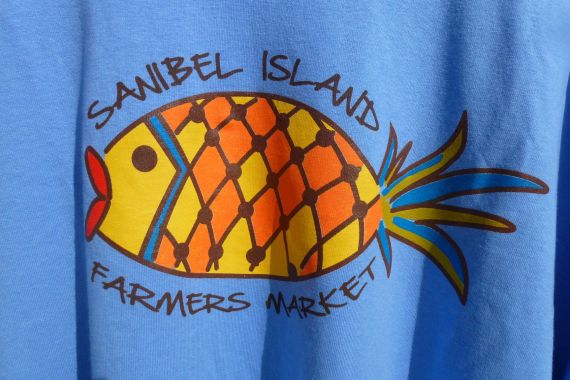 …do as the Romans do.  We take that old cliché to heart when we travel, always being sure to seek out the local haunts and do what the locals do.  So, today, we thought visiting the local farmer’s market would be just the local kind of thing to do- and, something we always enjoy no matter where we are visiting.

It was the first farmers market of the season and it seemed like the entire island showed up for the occasion.  It was a great atmosphere, people running into friends and exchanging hugs, people with their dogs, tourists toting their free Bailey’s General Store reusable bags (I know, because we used our coupon for one, too), and plenty of smiles to go around.  And, the vendors seemed genuinely pleased to be back in business for the season.

We surveyed all the options, settling on large pink shrimp ($15/lb.) from one vendor and fresh goat cheese ravioli from another. 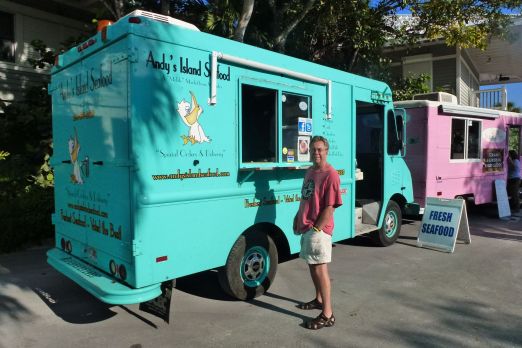 Next, I stopped dead in my tracks when I saw a young German couple selling their homemade German baked goods at their booth.  Pretzel rolls!  I absolutely loved sinking my teeth into those when I was in Germany, last year.  Two to go, please!  Tonight’s dinner was now planned- and, cooked to perfection by the best “Cook” in the world:  Bruce Cook.  Paired with some Barefoot Bubbly, it was delicious!

Sanibel Island Farmers Market was well worth the stop.  From the beautiful produce to the fresh seafood, bakery, cheeses, and artisan chocolates; there was something for everybody.  And, by the time we left, it appeared as if everybody had arrived.  It was time to get outta there and head to Captiva Island.

Captiva is connected to Sanibel by a bridge, however, at low tide, you can walk from one island to the other; the two are so close.  At only five miles long, Captiva is smaller than Sanibel, but just as beautiful.  And, from what we could tell, the one percenters who don’t have a home (or second home) on Sanibel, have one on Captiva, instead.  Both islands are quite high dollar, but Captiva had some ridiculous homes- that is, if you could see them through all the high-end foliage.

But, we weren’t there to gawk at the real estate; we were there to look for manatees- oh yeah, and breakfast at R.C. Otter’s, at the recommendation of our Sun City friends (again!).

Breakfast was delicious (homemade granola with HUGE fresh berries for me; blueberry pancakes for Bruce), but I was determined to see manatees before returning to Sanibel.  Thanks to our waiter pointing us to Jensen’s Marina, we were in luck; we saw three.

Did you know that the closest relative to the manatee is the elephant?  I sure didn’t! They are big, though; the average adult is 10 feet long and weighs between 800 and 1,200 pounds.

Since they are found in shallow waters, they are easy to spot.  One manatee we saw was feeding on the sea grass, just beyond the rocks of the marina, next to the shore.  In one day, these slow-moving gentle giants consume 10-15% of their body weight in vegetation.  So, much of their time is spent eating, like this one was doing.  They are mammals, though, so they come up to breath.  But that’s about all you will see of them above water; just their whiskers and mouth, grabbing a breath of air.  And, that, my friends, explains why I don’t have any photos of these “sea cows” to show you!  Photographing these big blobs below the surface of the water isn’t the easiest thing to do.  Just seeing these manatees, though, was a highlight.  They are an endangered species, so I felt fortunate to have that opportunity.

After returning to Sanibel for an afternoon swim, we grabbed our shelling tools to end our day with a stroll on the beach by our cottage.  The pelicans entertained us as we hunted for shells and watched Bo fetch her ball. 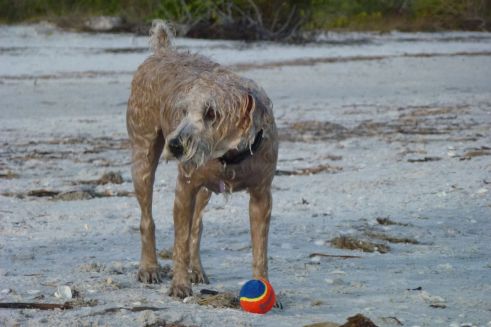