What I enjoy most about writing this blog is reliving my travels.  Between editing my photos and writing these posts, it just feels like my vacation never ended.  So, these last several days, since my return, has been pure nirvana.  Take Friday, for example; the perfect day to me.  It started with a swim workout with my friend (and coach), Mike, over at the Steve Lundquist Aquatic Center.  Since I usually train alone (except for Mike’s September – May, Tuesday & Thursday, adult swim program at the same pool), I have to rely on 100% self- motivation to push myself hard.  So, getting in the lane next to Mike is the extra push that I need to make those intervals and “keep on swimming”; just like Dory pleaded to Nemo, in Finding Nemo.  Mike is faster than me, but I know just how far to allow myself to fall behind him to keep up and not let him get completely away.  If that distance grows, I’m in trouble.

I had recently completed a self-challenge to see how far I could swim non-stop butterfly, just to prove to myself I could swim the most difficult race in swimming:  200 meter butterfly.  I was so happy to just to make it to 300 yards that I lost track of my yardage after that; I just kept going and going…  But, Bruce was shooting video, so I knew I could count up the yardage while watching it later.  I was shocked to I made it to 900 yards!  Hrummmph; if I had known I only had 4 more lengths of the pool to go, I would have listened to Dory and kept on swimmin’.  But, Bruce had given me that “if looks could kill” look, so I stopped.  He was tired of filming me and worried about my shoulders; especially the one that was operated on for thoracic outlet syndrome.  I was fine, though, and never got sore at all.  So, two weeks later (today), I will be making another attempt, as soon as the pool opens; this time for 1,000+ yards.

Anyway, back in the pool with Mike, he said, “Well, now, the next step would be to see if you can swim a broken 500 butterfly and see if you can increase your speed and make the intervals.”  By “broken”, he meant swimming it in increments of 25 yards on a set time interval.  But, the intervals get shorter as you go, which means that the rest periods get shorter.  And, that means you have to swim each 25 yard increment faster, just to make the interval.  So, he set the intervals at 4×25 yards @ :45, 6 @ :40, 6 @ :35, and the last 4 @ :30.  Since I had already swum half of my yardage before I attempted this set, I was so whipped by the end that I swam the last four continuous, just so I could make the interval. But, I DID IT!  And, did it again on my other slowest stroke; backstroke.

That 3,600 yard workout was one of my best ever; it felt great!  So, I kept the feeling going by editing my photos and writing my blog, after I returned home.  Nirvana!  Writing is like swimming; I get in a zone and time just slips away…

My perfect day continued with a visit from my “twin sister of a different mother”, Melody, and her husband, David, who is our next door neighbor’s son.  They are the friends we stayed with in Virginia, during last month’s trip to Washington, D.C.  We have grown close with the two of them; always a lot of great conversation and tons of laughs.  So, our evening was wonderful; enjoying conversation, drinks, and Bruce’s “Everything But the Kitchen Sink Pizza”. (I was supposed to swim in the Georgia Games the following day, however, the meet was canceled.  So, I enjoyed what has become a rare occurrence:  Drinking more than one glass of wine.)

Why were we going to Crystal Lake, anyway?  Laura’s step brother, Wayne, and his wife, Jeannie, invited us to stay with them at their home.  I had heard so much about them over the years and was very much looking forward to finally meeting them.  So, we planned on spending two nights at Crystal Lake, before flying home…

…It seems as if the train has had a delay.  And, in reality, it did.  It was only a couple of stops before ours that the train came to a stop on the tracks.  After a 70-minute delay (if memory serves me correctly), we found out why:  A fatality on the tracks by the previous train.  When we were finally allowed to proceed, we passed by a tarp on the side of the tracks; a covered body.  And, a little bit further, at the intersection, a cluster of police cars and an ambulance.  What a heart-wrenching sight that was; especially since we later learned the victim was only 18 years old.

Rather than leave you with something so tragic, though, I will at least try to brighten it up with a brief look at downtown Crystal Lake; a very small but charming city center oozing with small-town pride. And, finally, what we are convinced is the house of The Seven Dwarfs.

I’ll be back with more, after my swim! 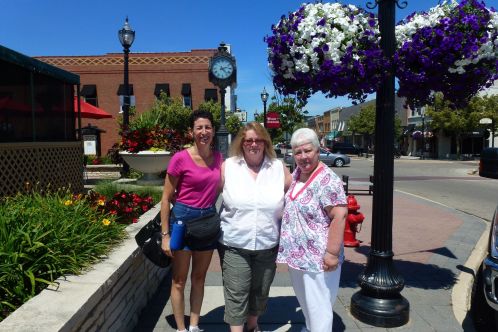 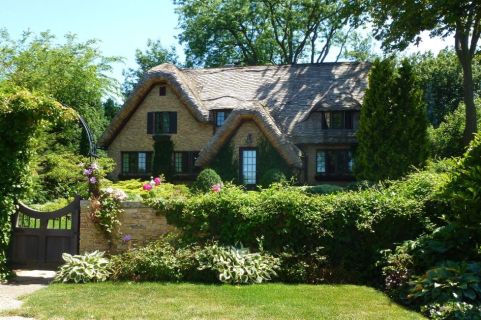