Although I am registred on the USMS (United States Masters Swimming) Discussion Forums as “ElaineK”, some of my forum swimming buddies (“Forumites”) call me “Elaine-iaK”; thanks to Ande, another swimmer on the forums who decided that to be a more appropriate name, due to my enthusiam.  There were other Forumites, however, who weren’t exactly enthusiastic about my use of blue Comic Sans MS font for my posts.  And, as a result, I was on the receiving end of some harassment; not all of it good-natured.

One day, I received a private message from another Forumite, “Debaru”, who just didn’t like the treatment I was receiving.  Debbie sent me a very nice, encouraging message which turned out to be the beginning of a terrific friendship.  As it turned out, Debbie, who now lives in Arizona, grew up just four miles from me!  She was seven years older, so we never knew each other, but we attended rival high schools (swam on our school’s teams) and hung out at all the same places.  For all I know, we passed each other many times, in Long Beach, back in those days; especially at the beach, in the summertime.

So, our banter back and forth via private messages and e-mails consisted of comparing our parallel childhoods, remembering places from our past.  It was like we had grown up together- but, separately.

Soon after, it was time to attend 2011 Spring Short Course Nationals, in Mesa, Arizona, very close to Debbie’s home.  Debbie wasn’t planning on swimming at Nationals, being new to competition; she was just going to attend and cheer her friends on in their races.  I convinced her that if I could swim at 2010 Nationals, at Georgia Tech, as a USMS newbie, she could swim at Nationals in her home town, too.  It took some arm twisting, but she agreed.  As one of a contingent of just eight swimmers from Georgia, I headed out with Bruce, to Mesa, and met Debaru for the first time.  What a blast!  And, after it was over, we celebrated:

We continued to keep in touch, sharing our swimming aspirations, successes (and not-so-successful-attempts), looking forward to meeting up another time in the future.  When my sister and mom planned to throw me a 50th birthday party, Deb drove out and joined in on the celebration, as well as some swim training.  Poor Bruce; all he heard from us during our time together was swimming-this and swimming-that!  As a non-swimmer, I’m sure we drove him nuts.  But, he was a good sport, and even waited on deck for us to complete our workouts.  Here we are, looking baaaaad:

And, not so bad, afterall…

So, after having such a blast together, we invited her to come see us out in Georgia.  Hey, while we’re at it, let’s swim in a meet together, here in Georgia!  I swam at a meet in her state; why not join me in mine?  So, last week, she flew out to see me and Bruce and compete at the Classic City Georgia Masters Long Course Meet, in Athens, this past weekend.  Bruce was smart this time, suggesting we make it just us girls, and leave him behind for some peace and quiet.  So, we packed the car and headed north to Athens, arriving the afternoon before our meet.  And, we talked, and talked, and talked…  Swimming, Long Beach, swimming, music, swimming, family, swimming, well…you get the picture!

The following morning, we arrived at UGA (University of Georgia at Athens), for the first long course meet of the season; one that counted for me as part of the Championship Series.  I wasn’t feeling too confident, coming off a muscle injury and a week away from the pool, while we were in Washington, D.C.  I was just hoping to survive; my only goal being to get through the meet without further injury.  And, if I could win high points in my age group like I did at Georgia Tech, in April, I would be 2-for-2, leaving just one more event to swim this year to clinch the trophy.  (It takes three of the four events to qualify, but I have enough points to win it if I compete in the open water swim, in July.) 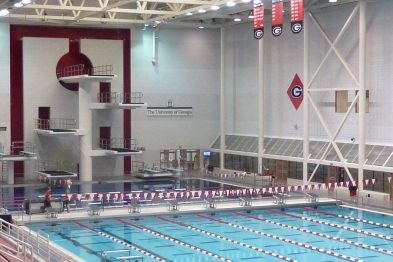 Athens’ pool and facility, in a word, is awesome.  But, long course (50 meters, rather than 25 yards for short course), in a word, is looooong!  I had not competed long course since 2011 Summer Long Course Nationals, in Auburn, so I wasn’t mentally (or physically) prepared for competing in such a long pool, where the walls seem miles away.  But, I did it before, and, surely, I knew I could do it again.

Before suiting up, I ran into my team’s matriarch, Anne Dunivin, who is 95 years old!

She is the sweetest, most positive woman; an absolute joy to be around.  I call her “Anne-with-an-‘e’ “, because that is how she introduced herself to me, more than one year ago.  She reached across the lane line at the Steve Lundquist Aquatic Center pool and said, “Hi!  I’m Anne; and that’s Anne with an ‘e’!”  So, when I cheer her on, I yell, “Gooooo Anne with an e!”  I also like to affectionately call her “Queen Anne”, since, she is the Queen of the Killer Whales.

Anne is amazing; she even swam the mile (that’s 1650 yards!) at 2012 Short Course Nationals, in Greensboro.  And, she has been breaking records every time she races, because she just “aged up”.  First, she broke them in the 90-94 age group.  And, now, she is breaking records in her new 95-99 age group.  She is bound and determined to age up to the 100-104 age group, so she can break the records of a gal who just set new records, as the first woman to compete in that age group. I’m convinced she’ll do it; no worries there.  She is as healthy as can be, gets around under her own power, climbs up and down the ladder, and swims multiple events at meets.  Last April, I was honored to compete in my first Senior Games (Geezer Games!) with her, where she won all gold medals (I won three golds and two silvers).  We were the book ends at the meet; Queen Anne was the oldest and I was the newbie.  What an honor posing for this photo with her, along with the other female medal winners. 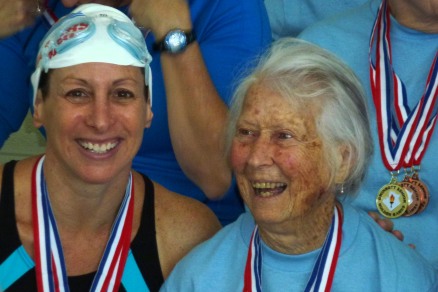 Here is some trivia about my friend, Anne Dunivin:  From what I hear, she was the first female to graduate from Emory University with a degree in chemisty.  She is one smart cookie!

I want to grow up to be just like Anne-with-an-e.

So, as it turned out, Anne broke more records in her 95-99 age group (it helps to outlive your competition…) and I won high points in my youngin’ age group, 50-54.  There were no best times for me at this meet, but I was happy to complete my five individual races and relay with no further injury to my leg.  But, let me tell you, swimming the 200 meter breaststroke (considered one of the most difficult races in swimming, after the 400 Individual Medley, 200 Butterfly, and Mile; not necessarily in that order), is one tough race to swim long course.  With every stroke, I kept hearing Bart Simpson’s voice in my head; the one in Bruce’s silly gag Simpson watches that asks, “Are we there yet?  ARE WE THERE YET??  ARE WE THERE YET???!“, when you push the button.

By the time I finished that race, I was pooped, but I still had the 100 meter breaststroke to swim, as well as the 50 backstroke (immediately following) and the 50 breaststroke.  Then, I had to swim the 100 meter breaststroke again in the relay; the same (almost) relay that made FINA World Top Ten Rankings, in 2011, for the 200+ age group (combined ages).  This time, though, the only other relay teammate to compete with me was our butterflyer; an awesome swimmer.  But, we were missing the other two gals who were much faster than their replacements.  I still swam my heart out, beating my earlier time by one tenth, but we ended up coming in more than two minutes later than the previous team.  Oh well; no record this year, but it was fun!

There is nothing like the feeling of touching the wall after your last swim race of a meet.  Just ask any swimmer; they’ll tell you how euphoric it feels.  And, for me, the more difficult the race and more events I swim, the better it feels; especially long course.  Can you tell how happy I was?

Debaru (55-59 age group) walked away with two blue ribbons and two reds!  And, I took home five blue ribbons for first place finishes (thanks to little competition in my age group).  We felt pretty good about that…

Since my videographer, Bruce, didn’t come to the meet, I only have one race video; the relay.  If you are curious to watch it, go to:  www.YouTube.com/Ekrugman1 .  If you fast forward to the 3:00 mark, you can catch me (attempting) to swim breaststroke.  There are other videos from past meets, too.

The following day, Bruce packed up the ‘yaks, along with me and Deb, to go paddling at Lake Dundee, a few miles up the road.  It was a fun being out on the water again.

So, Debaru headed back to Arizona, today, and we have a bundle of great memories from our time together.  She got a great taste of the south (At Southern Pit Bar-b-que, Saturday night, I asked the waitress for a knife, rather than negotiate the BBQ pulled pork sandwich with my hands, fearing I would ruin my beloved “Forumite” t-shirt.  The waitress responded in a very thick southern drawl, “I can bring you a bib!”  Uhhh, no, that’s ok; I’ll take a knife, thank you very much…).  And, I think she really enjoyed it out here in Sun City (AKA “The Old Folks Home”, as Aquageek from the USMS Discussion Forums calls it).

Next up for Elaine-iaK and Debaru:  2013 Summer Nationals, in Mission Viejo, California.  WoooHOOO!  We’re comin’ home!!