For those of you just joining me on our Washington, D.C. travels, please scroll down six posts to, “Riding the Railway to Washington, D.C.”.  The newest post is at the top, so you will have to work your way from there up the page.

Our next Washington, D.C. experience was a rather unique and interesting way to spend the day:  Touring the European Union Embassies, during their open house, as part of Passport D.C.; a month long celebration of international cultural awareness that takes place each May.  Check it out here:  http://www.culturaltourismdc.org/things-do-see/passport-dc .

We took the Metro in from Burke, ending our ride at Dupont Circle and Massachusetts Ave., home of Embassy Row.  Some of the European Union embasies are located in other locations, as well, so free shuttles transported us between them.

Thankfully, we received a valuable tip from an insider, before we made our way to the embassies:  Arrive early and see as much as you can before the huge crowds arrive!  We were thankful we headed that advice, because it was already quite busy when the tours started, at 10:00 AM.

Our journey started on the “Green Shuttle”, taking us to visit three of the embassies on the “Green Route”, on 16th St:  Lithuania, Poland, and Spain.  The description in the brochure/ map, in part, said, “If you cannot make it to Boston for the 14th Lithuanian Folk Festival, come to the Lithuanian Embassy!  You will have a unique chance to be introduced to the history of Lithuanian folk dance and experience our national cuisine.”

Upon arrival, we were greeted by smiling volunteers serving delectable treats from behind the buffet:  A variety of breads, crackers, meats, cookies, and pastries.  And, to drink, we were served Lithuanian beer.  It was a lovely complimentary spread; one I am glad we enjoyed first, as we later heard they completely ran out of food well before the event ended at 4:00 PM.

As we enjoyed our delicious treats (and beer!), we were treated to Lithuanian music, performed by costumed musicians. 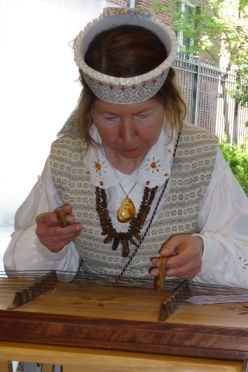 We could have stayed in Lithuania all day, but it was time to move on to Poland, where we enjoyed perogis and bratwurst, along with some Polish beer.  The food, again, was delicious, and I was really starting to enjoy these European beers…

Onward to Spain!  The Spanish embassy was beautiful, but in need of restoration.  Due to the current economic difficulties in Spain, there was no available funds to do all the needed repairs.  So, volunteers from the embassy went out into the community and recruited a few Spanish restaurants to attend the open house and prepare and serve their donated cuisine.  And, the embassy, sold tickets to purchase samples of seafood paella, tapas, and Spanish wine, to be enjoyed while being entertained by Spanish flamenco and contemporary dance.

We weren’t exactly starved, after eating our way through Lithuania and Poland, but how could we pass up paella and empanadas?  I went back to purchase some tickets and we ordered one of each to share and it was fabulous! 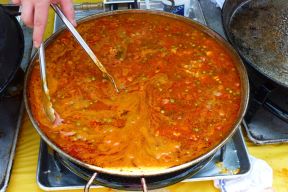 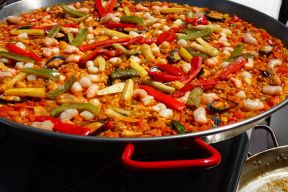 We were quite content as we boarded the shuttle back to the first makeshift depot, but I was determined to see more of the embassies; especially Belgium, where I was sure they would be treating their guests to Belgium chocolate!  So, we boarded the “Blue Shuttle” and made our way past all of the other embassies on the “Blue Route” to the last one on the route; Belgium.  By now, the lines were getting quite long just to get into the embassy.  Fortunately, though, the line moved fast, as they distributed free tickets for Belgian waffle samples and led us upstairs to view exhibits, watch a film, and taste more samples.  After finding the chocolate samples (ohhh yeah!), we watched a film produced by Callebaut, a company who supplies Belgian chocolate to many of our country’s pastry chefs.  We learned how cacao is grown, harvested, and processed, from beginning to end.

The tour continued with beer samples and ended in the courtyard where chefs were preparing Belgian waffes.  Wouldn’t you know it; they ran out of chocolate, just as we made our way to the front of the line.  So, here is Bruce with our chocolate-less samples; still delicious, anyway. 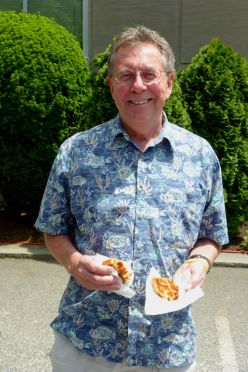 At this point, we should have probably called it a day.  Bruce was a trouper, trudging from one embassy to the next.  We kept waiting in lines to get into each embassy, only to learn they had run out of food and drink.  If there is ever a next time, I would just plan on visiting a few different embassies in the morning, check them off my list, then visit a few different ones the next time around.  Two couples I met on the Metro back to Virginia do just that.  This year, they focused on France and Germany and even walked away with complimentary t-shirts and cloth tote bags.  Nice!

In all, we visited nine embassies.  In addition to the ones I previously mentioned, we toured Croatia, Cyprus, Denmark, The Netherlands, and Slovenia.  Here is the embassy of The Netherlands; a must-see country in April, during tulip season: 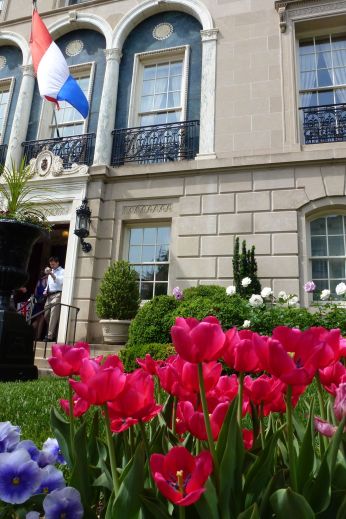 Of the nine countries we visited, I have actually traveled to Spain, Belgium, Croatia, Denmark, and The Netherlands.  I also visited Slovakia, located right across the bridge from Slovenia.  That’s a part of the world I would love to return and see more of, for sure.

Nine countries in six hours.  That surely beats, “If It’s Tuesday, It Must Be Belgium.”!  By the way, if you haven’t seen that hilarious comedy from the 1960’s, you MUST.  Just be armed with a box of Kleenex; you will need it from laughing so hard you cry.

So, at this point, it was time to drag our weary tails back to Metro to catch our train- along with the thousands of other people who had the same idea in mind.  Our train resembled a can of sardines!

Dupont Circle Metro stop is something to see; an escalator that takes you down 7-9 stories (David couldn’t remember which) to catch the train.  When I reached the bottom, I shot this photo back up: 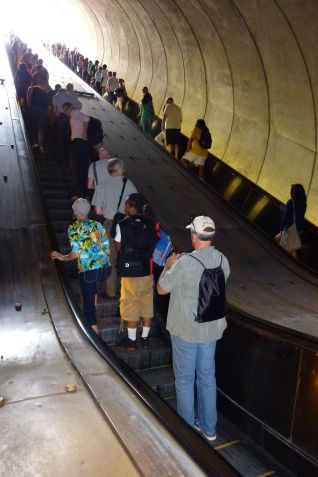 Our final blog episode will be written about our day in (on?) Maryland; a state I add to my “States Traveled” with an *, because we never did set foot on land.  Stay tuned…