The nice thing about arriving in D.C. by train is that Union Station is in the heart of the city; all accessible on foot.  So, we set out with the idea of walking the Washington Mall to the furthest destination first, then working our way back, as the day wore on and we wore out; a good strategy, considering the lack of sleep we got on the train.  Our other strategy was to see what we most wanted to see first and prioritizing the sights in that order.  Fortunately, as far as monuments and memorials went, we most wanted to see the Lincoln Memorial, as well as the new Martin Luther King Memorial; both located a fair distance away (on foot) from Union Station.

The Washington Mall itself was disappointing, because it was all torn up for refurbishment.  The reflecting pools, instead, were mounds of dirt and concrete; not exactly picturesque.  But, refurbishment is necessary to keep our capitol looking as spiffy as it should be, so we understood.  Besides, it gives us an excuse to go back someday, so we can see it in all its beauty- as well as visit all the Smithsonians we missed this time around!

We have seen plenty of photos of Lincoln Memorial, but no photo does it justice; including the ones I shot: 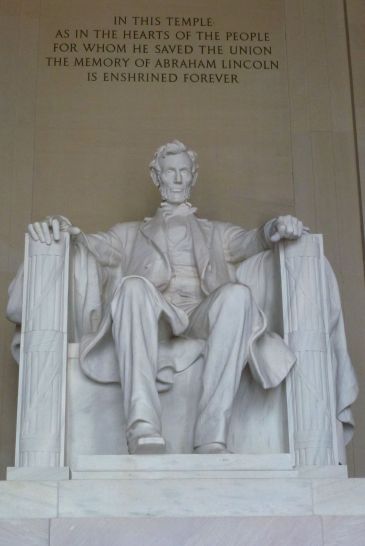 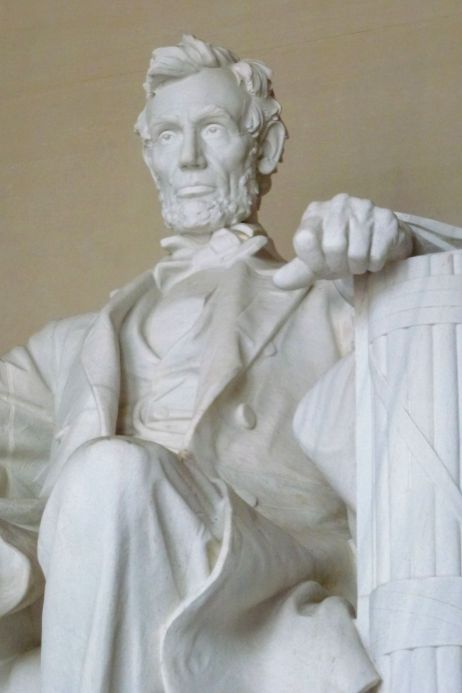 Not until you see it in person do you realize what a magnificent masterpiece this memorial is.  We were in awe.

Before heading over to see the new Martin Luther King Memorial, we visited the World War II Memorial, as well as the Korean War Memorial and the Vietnam War Memorial.  The last one was especially difficult and emotional to view; especially when we saw the thousands of names of soldiers engraved in the granite wall; all lives lost in a war our country had no business being a part of in the first place. 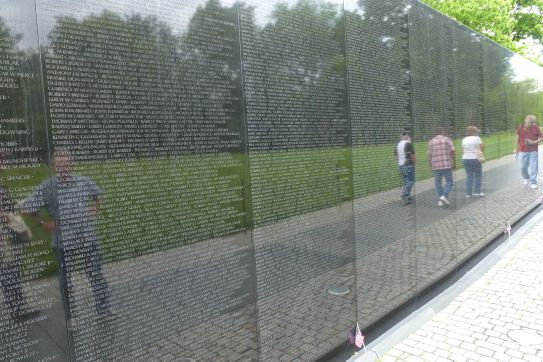 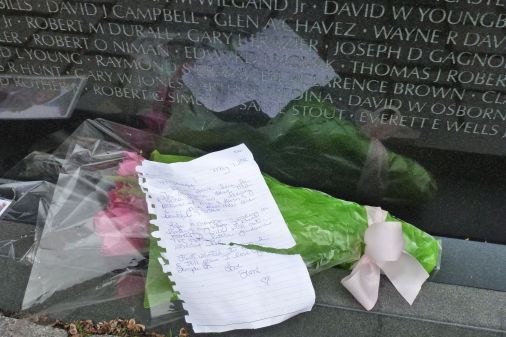 We almost missed the Martin Luther King Memorial, because most of it can’t be viewed from the street.  But, once we entered, we were quite impressed with what had been created to honor that great man.  Martin Luther King would have been proud. 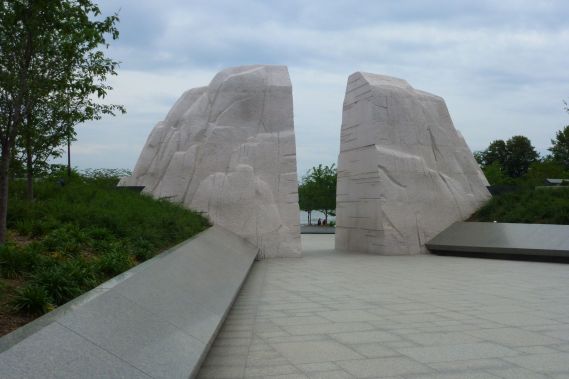 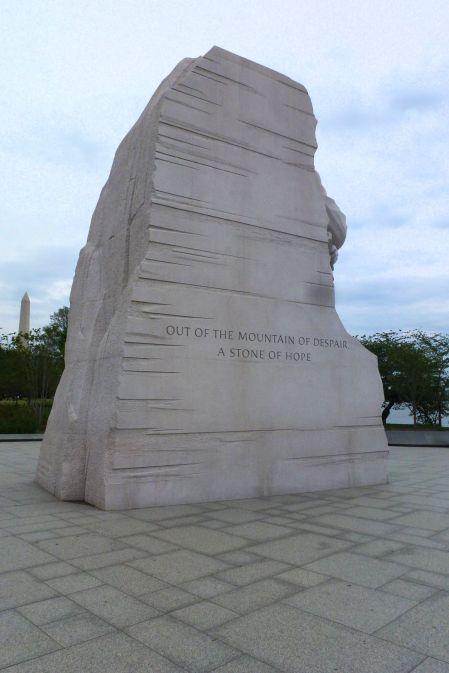 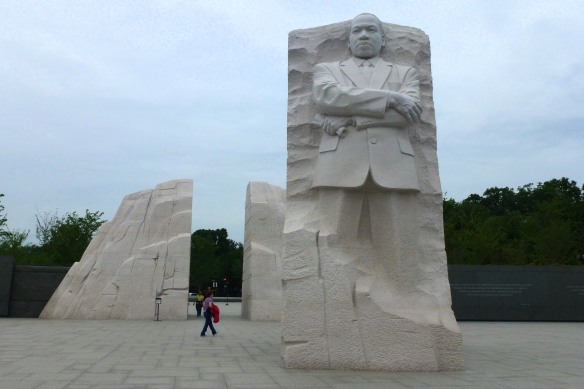 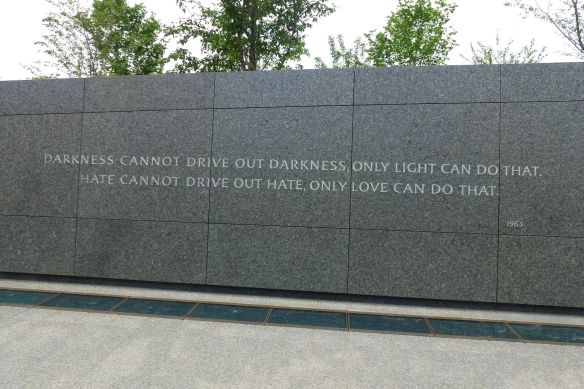 There was a huge curved wall on each side of the entrance with engraved quotes; all inspiring and memorable. This truly was a fabulous memorial.

After a long day and many miles walked, we headed back to Union Station to collect our suitcases and board a VRE (Virginia Railway Express) train to Rolling Road Station, Virginia, where Melody met us and took us back to their lovely home. 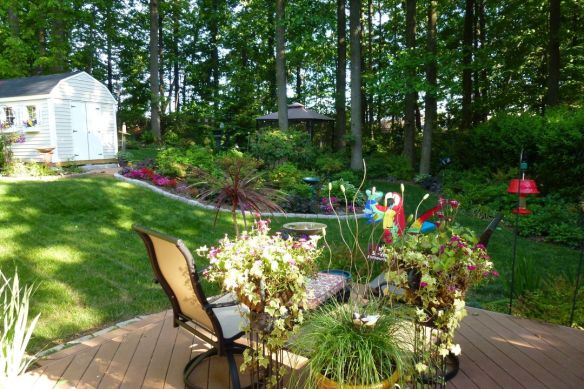 As you can see, Melody is quite the gardener!  Their backyard was a beautiful and serene place to relax, complete with hot tub (located to the right of where I was standing) and numerous feeders to attract an array of beautiful birds.  Between the birds, chipmunks, and squirrels, there was plenty of wildlife to watch; a sharp contrast to the hustle and bustle of the concrete jungle of Washington, D.C.

The following day, David took us in with him to work, so we could catch our 7:30 AM (!!!) tour of the White House.  David is the C.F.O. of the Nationals Institute of Standards and Technology; part of the Department of Commerce, located very close to the White House.

Security at the White House is extremely tight, as you can imagine.  We first had to be put through a background check, before we even received confirmation of our tour date.  For the tour, we could only take in our wallets; no purses or bags allowed.  And, DEFINITELY, no cameras.  Since there is no place at (or near) the White House to lock them up, David had us lock up our belongings in his car while we went on tour, and gave us a key to return for them later.

The tour was self-guided, however, there were security personnel available to ask questions.  The tour led us through a hallway where we could peek into the Library, Vermeil Room, and China Room, before walking through the East Room (used for receptions, ceremonies, press conferences, and other events), Green Room (used for receptions), Blue Room (often used by the President to receive guests), and Red Room (used for small receptions).  Of those rooms, the Blue Room was most unique; oval in shape and a beautiful shade of blue.

The State Dining Room was the last of rooms we viewed.  It can seat 130 guests at dinners and luncheons.  Carved into the fireplace mantel is a quotation from a letter by John Adams:  “I pray Heaven to Bestow the Best of Blessings on THIS HOUSE and All that shall hereafter inhabit it.  May none but Honest and Wise Men ever rule under this Roof.”  His prayers were answered during some presidencies, however, definitely not by others (Think: NIXON).

Since the second and third floors are used only by the Obamas and their guests, it was off-limits on our tour.  But, just getting to see any of the White House was a special experience!  And, after visiting the White House Visitors Center (excellent and highly recommended), I insisted on returning later with my camera, so I could photograph the front and back of that majestic mansion; the oldest public building in the District of Columbia: 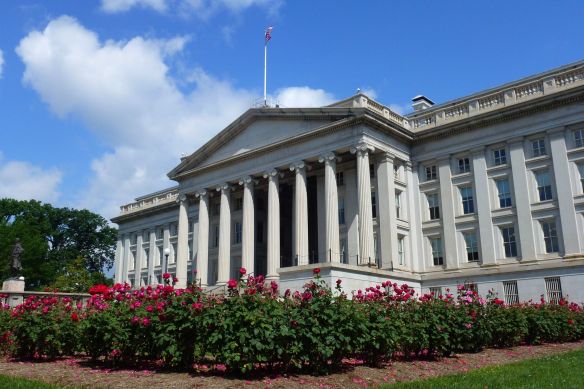 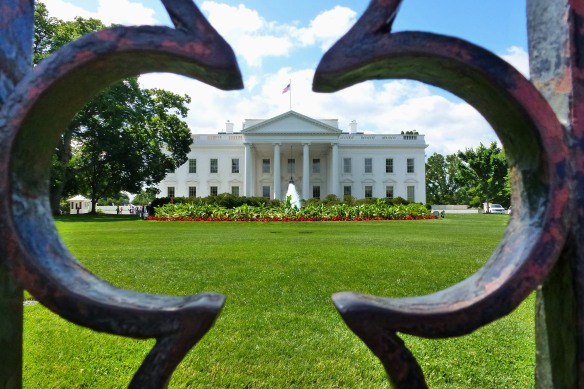 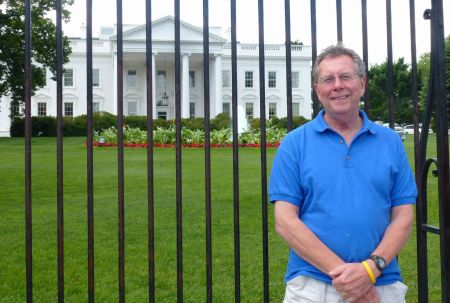 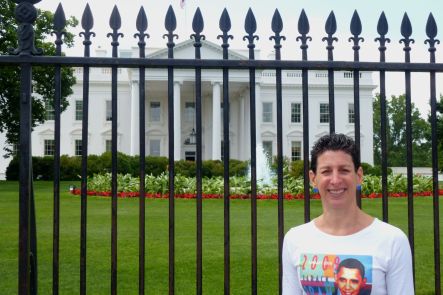 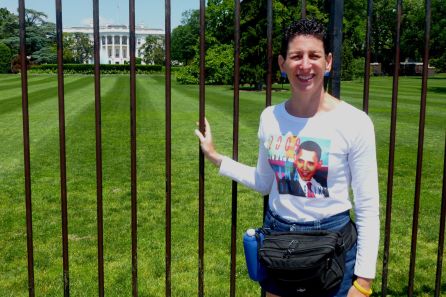 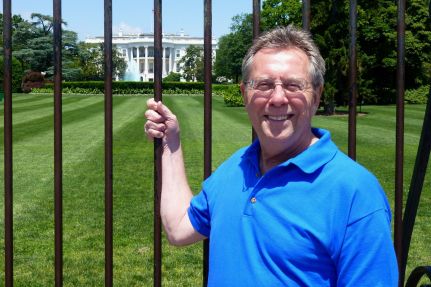 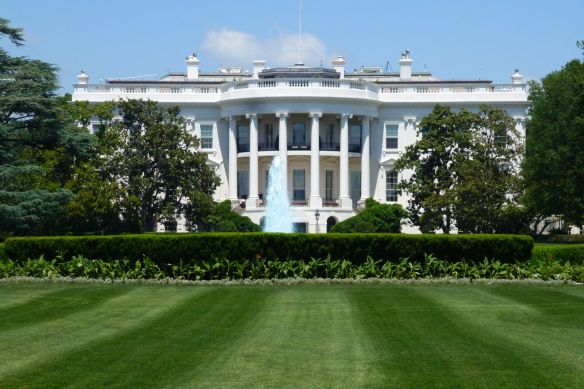 “TOURISTS!!!”  Yeah, I know.  Shamelss.  But, there is something special about visiting the presidential home in your native country that makes you want to join in on the spectacle.  All hopes of blending in as you would hope to do while traveling in a foreign country are tossed aside.  All bets are off.  So, we took a gazillion photos of each other with the White House in the background.  And, when we weren’t photographing each other, we were being asked by the other tourists to shoot photos of them with their cameras.  We were just two of thousands of people doing the exact same thing- that day alone.  And, after double and triple-checking that I really did get some decent photos, I mentally crossed the White House off my bucket list of must-see, must-do places to visit.  MISSION ACCOMPLISHED!

Next up:  Smithsonian Renwick Gallery

2 thoughts on “Monuments and Memorials: A Walk Through History”