Content with spending our days seeing each river port via hop on-hop off bus and hoofing it on foot, Bruce and I didn’t sign up for any premium excursions during our three-week American Queen Steamboat adventure down the Mississippi River— except for one: “Small Towns, Big Legends:  The Story of B.B. King—A Musical Journey Through the Mississippi Delta.”  This tour was scheduled for our stop in Greenville, Mississippi, and we had looked forward to it with the anticipation that it would be one of the highlights of the cruise.  We were not disappointed.

The brochure description summed it up nicely, “Join us on a journey to Indianola, Mississippi, the hometown of legendary blues artist, B.B. King.  Built to tell the story of B.B. King and how the Delta Region shaped his legacy, the B.B. King Museum and Delta Interpretive Center captures the story of the Delta Blues.  Enjoy a live Gospel performance as you enter, followed by a self-guided tour of the museum.  Finish the day off with a visit to Club Ebony, an iconic night club built at the end of WWII and featured entertainers such as Ray Charles, Bobby Bland, Albert King, and of course—B.B. King.

Designed by B.B. King and housed in a former cotton gin where B.B. King worked in the 1940’s, the B.B. King Museum opened in 2008.  In addition to an extensive collection of artifacts owned by B.B. King, there are excellent exhibits about his life and other blues musicians from the region that was the birthplace of Delta Blues.

It is also the burial site of Riley B. “Blues Boy” King, who was buried in the planned memorial garden shortly after his death in 2015, at the age of 89.

Upon our arrival, we watched an excellent film about B.B. King and his childhood home of Indianola.  I was tickled, because one of the musicians who played with B.B. King and was interviewed about him in the documentary was Nathan East.  A phenomenal world-renowned bassist, Nathan was the childhood best friend of one of my adult best friends (of 26 years), Carl Evans Jr, who died in 2008.  During high school, both Nathan and Carl performed in “Power,” a state award-winning band.  Nathan went on to become one of the most recorded bassists ever and was one of the founding members of contemporary jazz quartet “Fourplay”.  Carl, meanwhile, formed contemporary jazz group “Fattburger” along with four other top San Diego musicians, including Hollis Gentry, one of the other “Power” members.  (Hollis has since died.)

Back to the film about “Blues Boy” King, we learned that he had moved away from Indianola to further his music career; however, he never forgot his Delta Blues roots.  Determined to piece together his early childhood, but not remembering where in Indianola the house was where he was born, King used a recording of his father describing the location of his birthplace home to find his way back.  It was all documented in the film, and his reaction to finding that spot was touching.  The house is no longer there, and the land is now a cotton field.

Following the documentary, there was a fabulous musical performance by a few of the local musicians, which we thoroughly enjoyed before continuing on to our self-guided tour of the exhibits.

One of the things I wanted to learn from the exhibit was why B.B. King named his guitar (actually, 49 of them throughout his career) “Lucille”.   Well, that’s an interesting story!  Lucille originated in 1949 following a bar fight in Twist, Arkansas where King was playing.  Two guys, whose rambunctious fight caused a fire, were fighting over a waitress… named Lucille.  During the fight, they had knocked over a container of kerosene, which started the fire, and burned the bar down.

When it was time to leave the museum, we weren’t ready.  There was so much to see and so much great music to listen to; we could have spent the entire day there! 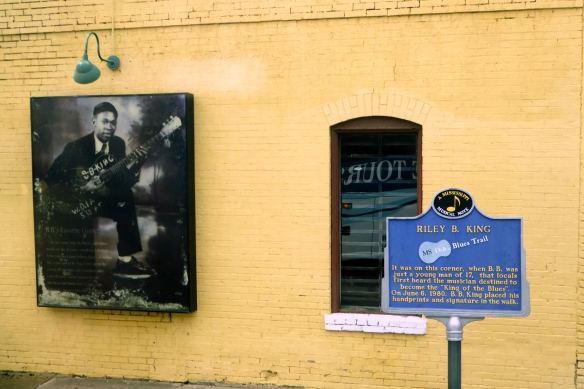 Our bus took us on to Club Ebony, an iconic blues night club that King bought in 2008 and gave to the museum in 2012.  Until his death, King returned once each year and performed with his band as part of a blues festival.  He would perform at night, but stayed through the morning to sign autographs and pose for pictures for every single fan.  He would then stay and talk with the bar staff.

Although we were told that during our visit to Club Ebony, we would be enjoying a “Southern snack” while being entertained by a local blues band, we arrived to find a full buffet meal being served by a local caterer whose servers were eager to ensure that nobody left hungry!  The food was tasty, and the music was top-shelf, including an excellent guitarist who turned out to be the grandson of Muddy Waters. 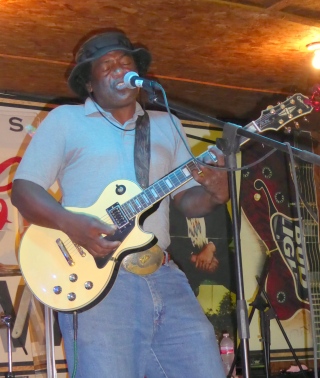 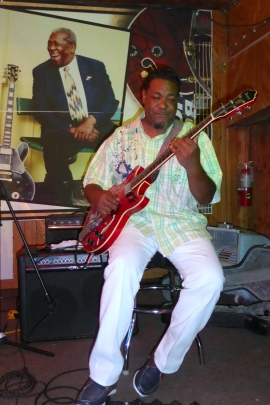 The club was old and funky; you could just imagine B.B. picking at “Lucille” and Ray Charles singing, “Georgia On My Mind.”  Thanks to King turning over the club to the B.B. King Museum and Delta Interpretive Center, it will continue to draw great blues musicians to its front door for years to come. 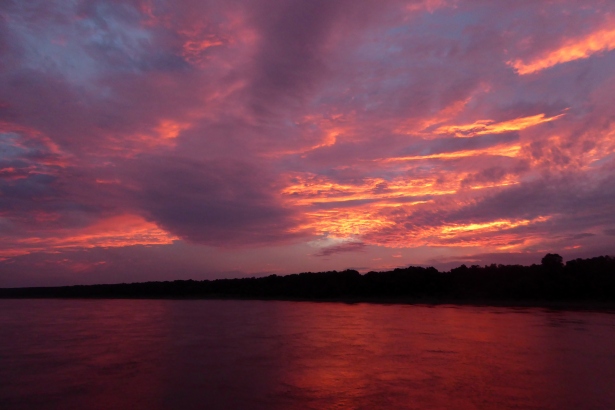 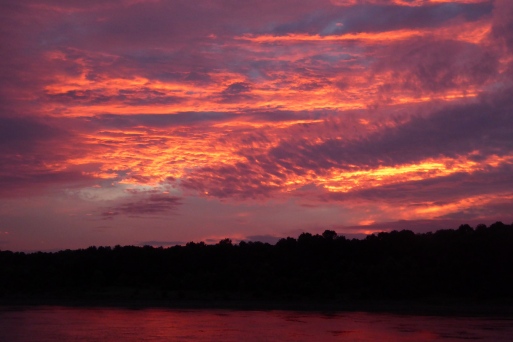 FROM TIFFANY WINDOWS TO COCA~COLA NOSTALGIA:  VARIETY IN VICKSBURG