Leading up to our April 9th departure from Miami aboard Fathom’s Adonia, the e-mails between me and Beni were flying across the internet at a rapid pace.  Beni was so excited we were returning to Cuba and would see him on his birthday, April 11.  We planned everything out to make sure we were all prepared to take full advantage of our day together, including taking him out to lunch along with Eduardo and his assistant, Grisel.

In one of Beni’s messages, he told me he went to meet Eduardo and Grisel, so he would be familiar with them before our reunion.  As it turned out, they had known each other years before in the military!

Eduardo, a glass blower for the past thirty years, is the only glass artist in the country producing and selling his glass pieces.  Procuring supplies is extremely difficult—and expensive—so it has held him back from being able to create art without limitations.  He asked Beni to pass along the message to Bruce that if there was any glass we could bring with us to Cuba, Eduardo would buy it.  Bruce immediately scoured his studio to compile a care package of glass rods and small pieces of glass we could carry.

Meanwhile, I asked Beni what items I could bring for him and his family that are difficult for them to buy, but easy enough for us to pack.

Fathom frowns on passengers bringing items to donate arbitrarily to people on the streets, and I agree with their “give them a hand up, not a hand-out” philosophy.  Creating a begging culture among the locals and expectations of getting free hand-outs from tourists has negative long-term ramifications.

Specific gifts, on the other hand, met with the Fathom Impact Travel Staff’s approval, since the items would be distributed privately to our friends.  The glass in particular was viewed as a great way to give Eduardo a hand up.  He had planned on making a glass piece to enter into an art competition, and the glass Bruce was bringing could be used for that purpose.

For Beni, I had promised him I would make a flash drive of our favorite music; but, I also added pictures of our community and home, favorite photos I used in my photo notecard line ( www.ExquisiteCards.Fototime.com ), photos I took of Santiago de Cuba during our previous visit, the video of Beni and Bruce singing “Dock of the Bay”, and anything else I thought he would like.  Since he was in need of data storage, I loaded it all up on a 64 gb flash drive I purchased on Amazon for only $15.  (I don’t even want to THINK about what I spent on the 1 gb external hard drive when I started my document scanning business, Doc – to – Disc, back in 1993.  It was a four-figure expense!  Writeable TDK gold cd’s cost me $26 EACH!!)

I also asked Beni what I could bring his family.  His first response?  Glow-in-the-dark stars he could put up on the ceiling of his granddaughter’s bedroom.  That warmed my heart!

What else?  Beni gave me a list of ideas, but he insisted I shouldn’t buy all of the items.  They were just options:  Toothbrushes, toothpaste, dental floss, deodorant, and some other personal care items I was unable to decipher from his English usage in the e-mails.

We decided to bring him everything we could figure out from the list, most importantly, the stars (and planets, too!).

Fortunately, our community had a vendor fair just days before our departure, so we gladly accepted the handouts representatives insisted in throwing into our goodie bags as we roamed from table to table to learn about their businesses.  The dental care kits were especially appreciated, as were the pens, notepads, and tote bags.  All of it went to Cuba with us for Beni and his family, where we knew it would be much appreciated.

Putting it into perspective as to why we took it with us instead of donating it to our local food bank as usual, the average salary in Cuba is about $20 a month.  When Beni completes his exams and becomes a pastor at his church, he will earn only $12 a month.  Sure, the government pays for their education, healthcare, telephone, and some food (additionally, utilities and housing are low in cost through subsidies); however, Cubans must pay for everything else on an average income of $20 per month!  The cost of a bottle of shampoo in Cuba?  $5.  A toothbrush?  About $1.  That’s more than a typical Cuban earns in a day!

Our plan was to meet up across the street from the port, once we arrived in Santiago, cleared customs, and exchanged our dollars into CUC’s (roughly an even exchange not counting fees).

We didn’t know what to expect when we put our bags through the x-ray machine after having our passports stamped.  Would we be questioned?  Would they forbid us to bring these items into the country?  Surprisingly, my bag of goodies for Beni wasn’t questioned at all.  Instead, it was the box of glass Bruce attempted to carry through in my Speedo backpack.  (Fortunately, the bracelet Bruce made for Grisel went unnoticed.)  The agent pulled us aside, opened the box, and gave Bruce a confused look.  Whether he understood our explanation (or even understood English), we’ll never know; but, I think it helped to point to my earrings, and then point to Bruce and say “artist”.  We told him the glass was for Eduardo, a glass artist at Artesanias Art Deco.  Either the customs agent understood and accepted our explanation, or he just wanted to get rid of us, once he saw we didn’t have anything illegal in the box.  Needless to say, we hustled ourselves out of there before they could change their minds!

Beni spotted us immediately and came running across the street to greet us with a big smile and bear hug.  As we discussed our plan for the day, we were disappointed to hear we wouldn’t be able to meet the rest of his family.  There was an unexpected death of someone they knew, and they had to go to the funeral.

Before walking up to Eduardo’s glass studio, I told Beni we would give him his goodie bag at the end of the day, so he wouldn’t have to carry it around; however, I wanted to give him his flash drive right away, so I wouldn’t forget about it.  You should have seen the surprised look on his face when he opened it up and saw “64 gb” printed on the plastic!  The largest size flash drive available in Cuba is about 8 gb, and it’s very expensive for them to buy.

Eduardo’s facial expression was even funnier when he opened the box of glass.  Another photo that got away; I should have been prepared…  It was priceless!  It reminded me of the look a kid gets when he walks into a candy store—pure delight!  Seeing colors of glass he otherwise has no way of obtaining was so amazing to him, we could practically see his mind wheels turning with ideas of creations he would make with his new-found glass.

Then, a serious look appeared on his face.  Through Beni’s translation, Eduardo wanted to know, “How much do I owe you for this glass?”  Bruce quickly replied, “Oh no, no, no; this is a gift!”  The look of gratitude and his sincere, “Muchas gracias!” needed no translation.

Meanwhile, Grisel smiled broadly as I put the bracelet on her wrist.  She loved it!

Bruce and I looked at each other and smiled.  This was going to be a very memorable day! 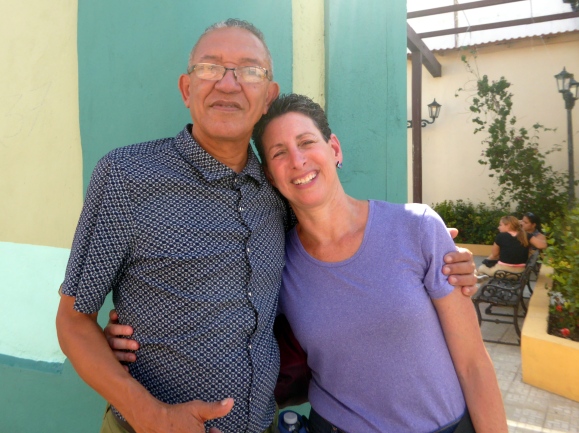 Me with my friend, Beni

Next up:  OUR DAY WITH BENI, EDUARDO, AND GRISEL

6 thoughts on “SANTIAGO DE CUBA: OUR REUNION WITH BENI, EDUARDO, AND GRISEL”