The drive along State Route 13 from Elmira to Ithaca was breathtakingly beautiful. Atlanta may be the “City of Trees”, and there are plenty of them along the roads in Griffin, but not quite the abundance of trees like here.

Yesterday was all about the local wineries, and today it was WATERFALLS. They’re everywhere!

Our first stop was at Robert Treman State Park where we had a short hike in to see Enfield Falls. Here, swimming is allowed as long as a lifeguard is on duty. It is still too early in year, because the water is c-c-c-c-COLD! Trust me on that; I tested it by dipping a hand in the water, and that’s as far as I would get, even if swimming had been allowed today! 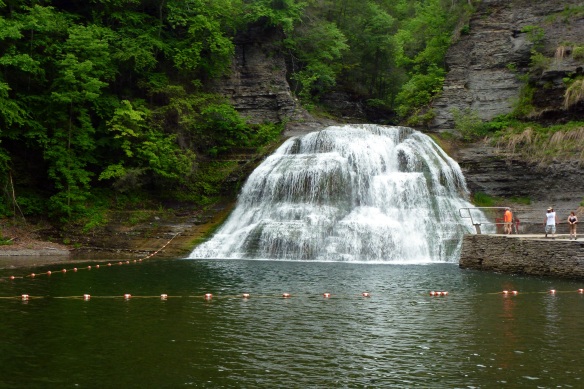 If I hadn’t seen it with my very own eyes, I NEVER would have believed a state park waterfall (or ANY waterfall for that matter) would have a– get this– DIVING BOARD! Yes, you read that right.

During the off months, the board is removed from the frame, and it is replaced with a “NO DIVING” sign. See below, if you don’t believe me. 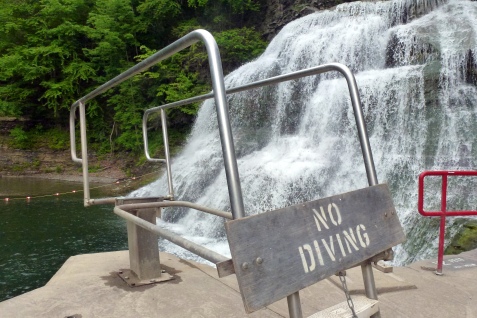 There was also a roped off swimming area, and I could just see grabbing my cap and goggles (in the summer months) for some laps back and forth.

Our next stop at Robert Treman State Park was the hike in to see Lucifer Falls. Seeing only six other cars (and no tour buses!) in the parking lot was a delightful sight after the throngs of tourists we encountered on Memorial Day at Watkins Glen. We hiked the Gorge Trail to the falls enjoying the peacefulness of being the only ones during much of our hike. 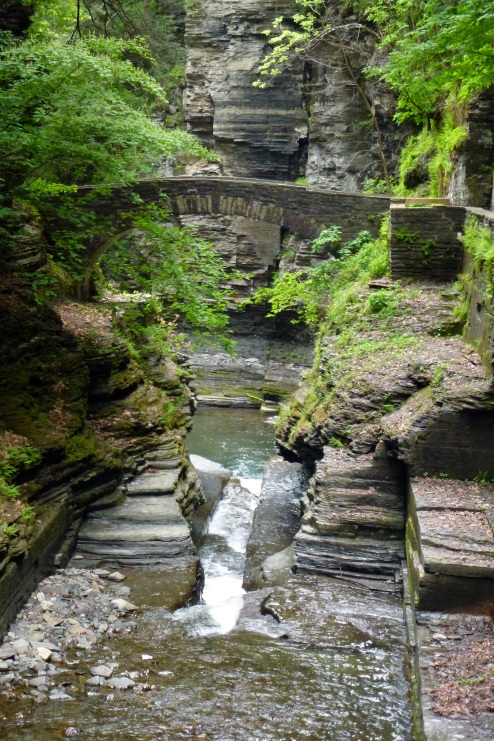 This was the most interesting of the falls, because of the ups and downs, and twists and turns. It was just stunning! 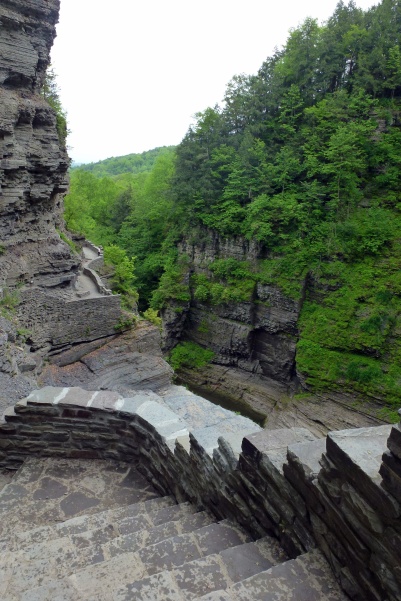 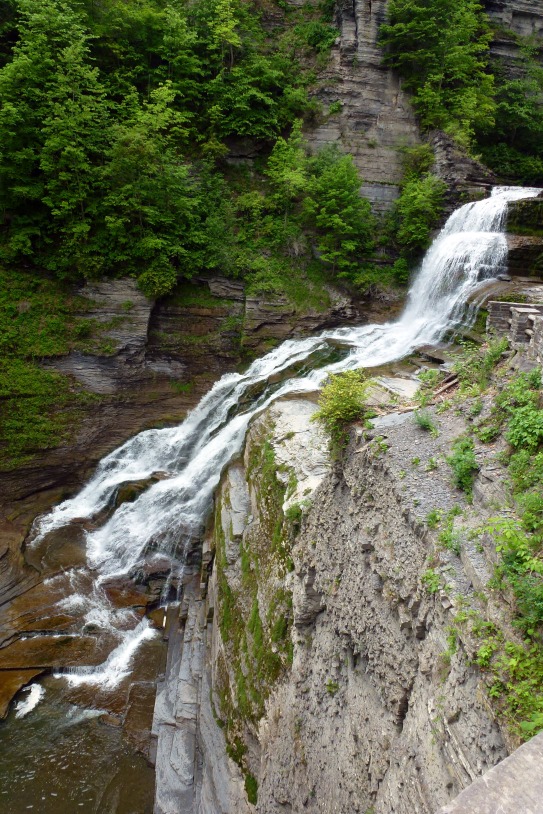 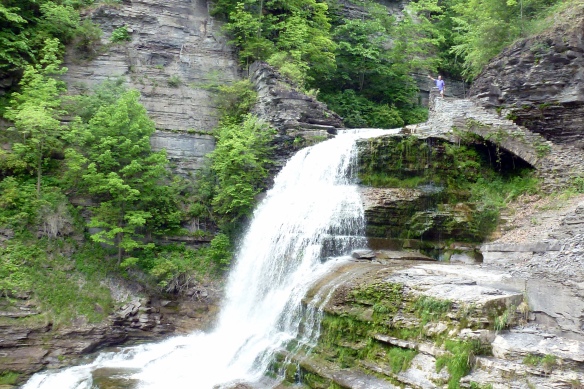 For perspective and scale, that tiny person in the upper right corner is Bruce! 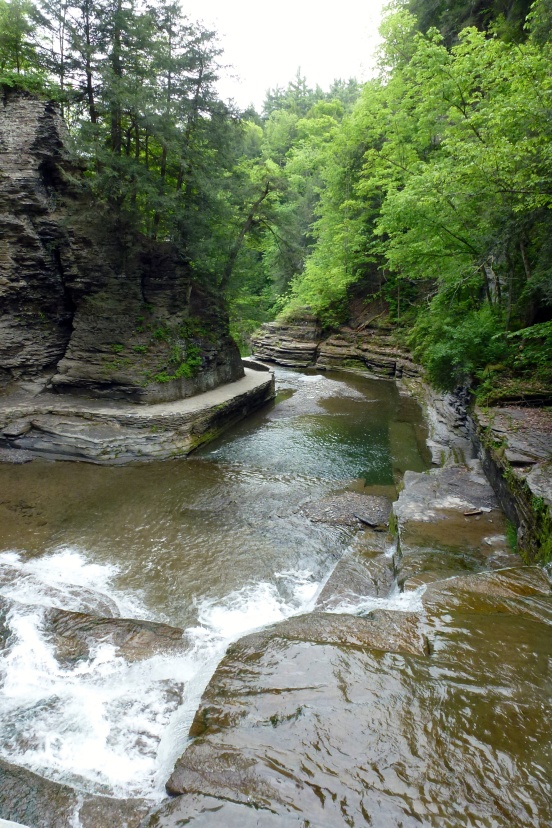 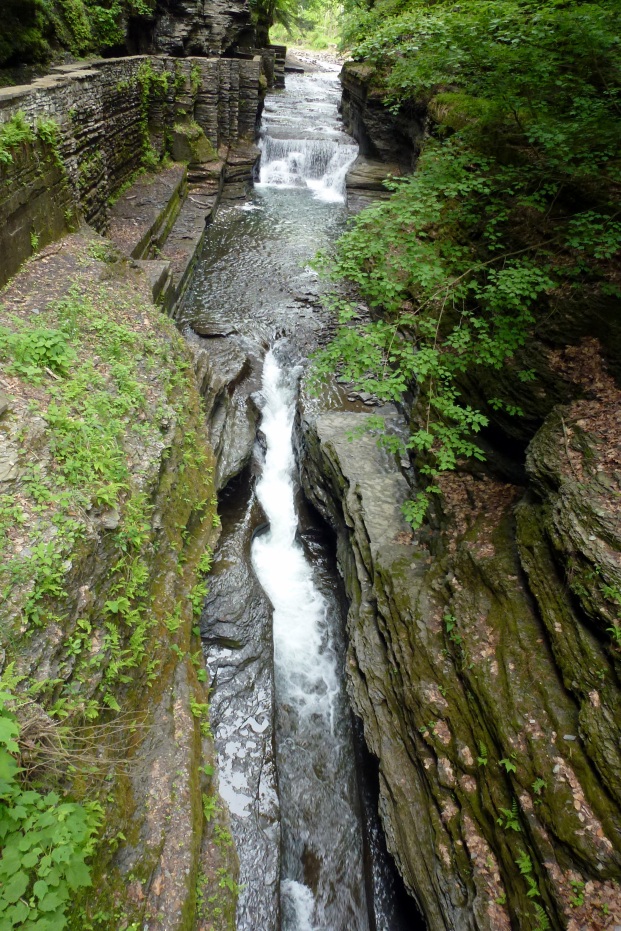 After a short drive, we arrived at Taughannock Falls and first took in the view at the Falls Overlook. At 215 feet, Taughannock is the tallest free-falling waterfall in the northeastern United States. It was quite a perspective from the top looking down at the tiny specks of people below. Soon, we would be those tiny specks looking back up to the overlook. 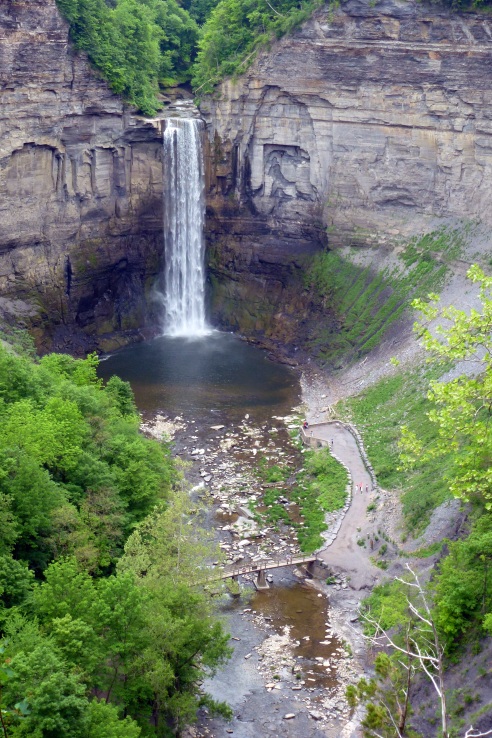 Although the hike in wasn’t as interesting, because it was fairly flat, it was still gorgeous. The thick tree canopy provided a nice, cool shade from the sun, and the path followed along the river. 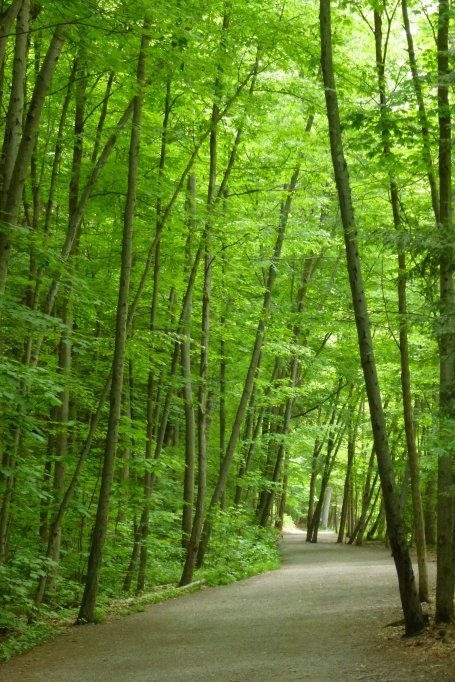 Crossing the river on a small bridge, we could view the full length of the falls and see just how high we had been on the overlook. WOW! 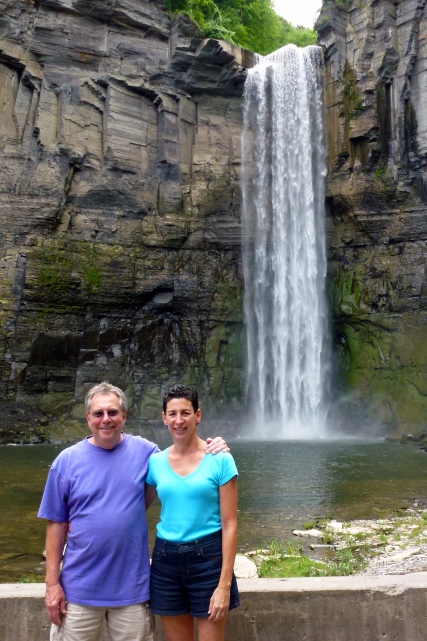 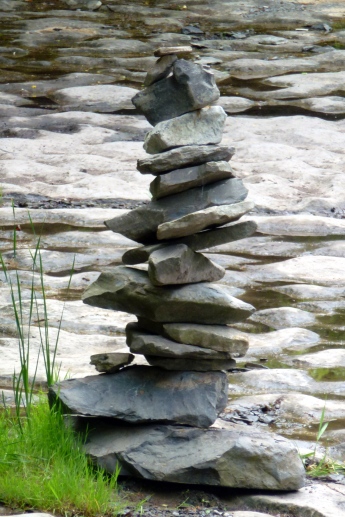 Our final hike of the day was a very short one at Ithaca Falls, located in the city of Ithaca. When I say “in the city” I mean IN the city. It was in a residential neighborhood, and there were houses just across the street.

What we enjoyed most about these falls was the ability to get right up to the waterfall, just 25 or 30 feet away. Fabulous! 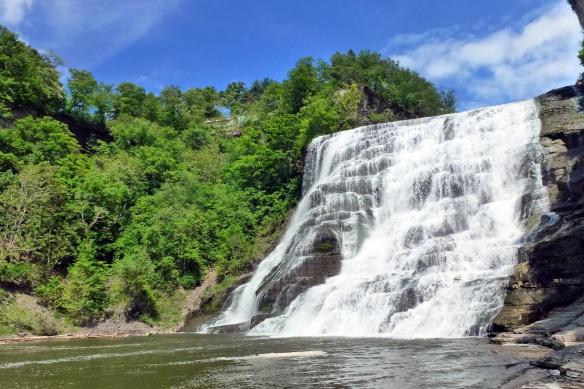 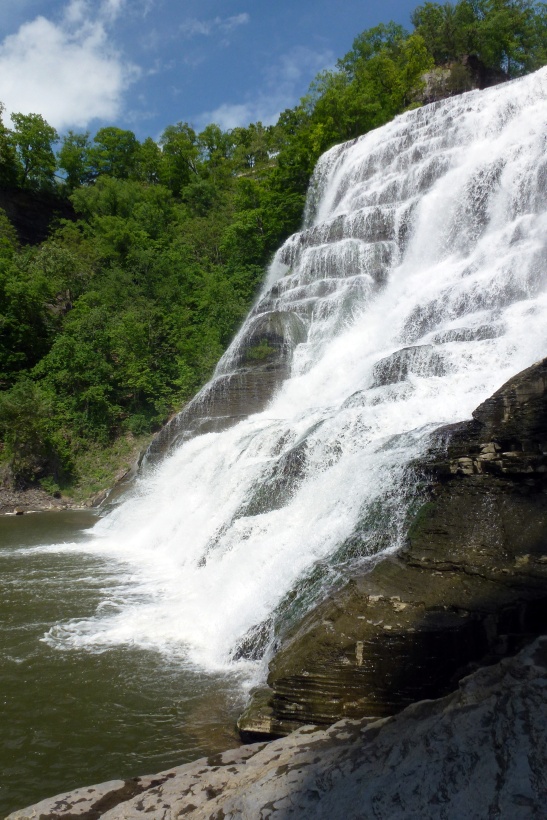 Although there were other waterfalls in the city (including some on Cornell University’s campus), it was late in the day, and we were getting hungry for dinner.

Just a short walk from our hotel was the #3 ranked restaurant on Trip Advisor in all of Ithaca, a city that is a foodie haven for excellent ethnic cuisine.

Saigon Kitchen was fabulous, and at $12 for my “Saigon Kitchen Curry”, it was reasonably priced. It was the happening place, too, because the restaurant was packed with people pouring in and out. For a Wednesday night, they were sure doing a great business!

Tomorrow, we hit the road and head for Alexandria Bay at Thousand Islands.